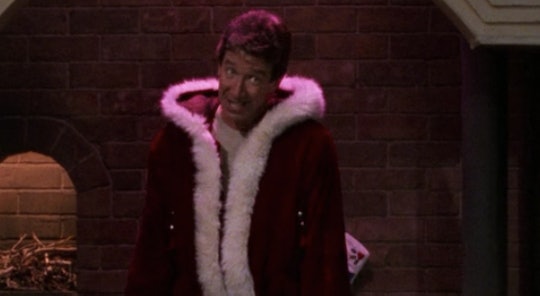 Is The Santa Clause Appropriate For Kids To Watch?

This classic Christmas movie is probably on your list to watch, but here's how to know if your kids are ready, too.

As the holiday movie lineups appear on your favorite channel, you're going to want to sit down with your kids and enjoy old favorites. But before you turn it on for your little ones, you'll probably start remembering all the themes of some of your favorite Christmas films: burglaries, absent parents, and custody battles. That last one is a real doozy, so knowing if The Santa Clause is appropriate for kids to watch is a must. As with most movies, it totally depends on your child and what you think is right for them, but there is some insight out there from other parents (and kids, too).

The Santa Clause is a classic '90s Christmas movie starring Tim Allen, of course, as skeptical dad Scott Calvin. His son wakes up him on Christmas Eve after hearing a clatter on the roof, and when Scott investigates, well, it accidentally leads to Santa's demise and soon learns he'll have to be his replacement.

For starters, The Santa Clause is rated PG for a few adult jokes, according to IMDB, which also noted that most of them are removed for televised broadcasts. IMDB has detailed parent guides for family and kids' movies, including one for The Santa Clause that lists all the scenes of alcohol consumption or smoking, bad words, potentially upsetting scenes, and more. Parents can always read through it before tuning into the film to see what they think.

About that potentially upsetting content: What upsets kids is pretty unique to each little person. In my experience, my younger brother could watch the Transformers movies by age 6 and tell you how Megatron beat up Ironhide complete with a full reenactment. Meanwhile, my niece at age 6 couldn't get through Frozen without tears. So yeah, every kiddo has a different level of sensitivity, but IMDB warns some may be upset by one key scene in The Santa Clause.

Remember that part where Santa falls off the roof and dies? It's the catalyst for the rest of the movie, so if your kiddo is a huge Santa fan, that may not be a good start. If they're able to separate what happens to fictional characters from real life, it'll probably be no trouble at all. You know your child better than anyone, so just use your judgement.

Common Sense Media adds that the movie revolves around the main character being divorced and spending Christmas with his son, which may be a touchy subject for some families. Also, while the premise of the movie is that Santa is real, lots of characters argue that he isn't. If you're not ready to potentially have that conversation with your kids, The Santa Clause may be one to skip watching this year. That said, there are lots of popular Christmas movies that deal with this idea, so maybe it's no big deal for your little ones.

All those disclaimers aside, lots of parents and kids say The Santa Clause is one of their favorites to watch during the holidays. Common Sense Media has reviews of the movie from parents and kids of all ages, so you can always flip through to see the five-star ratings (or find out which moments made kids or parents a little uncomfortable). If your family ends up loving it — and who could blame you? — check out Common Sense Media's guide to everything you need to know about The Santa Clause 2.

The Santa Clause is streaming now on Disney+.

We may receive a portion of sales from products purchased from this article, which was written by our Editorial team.