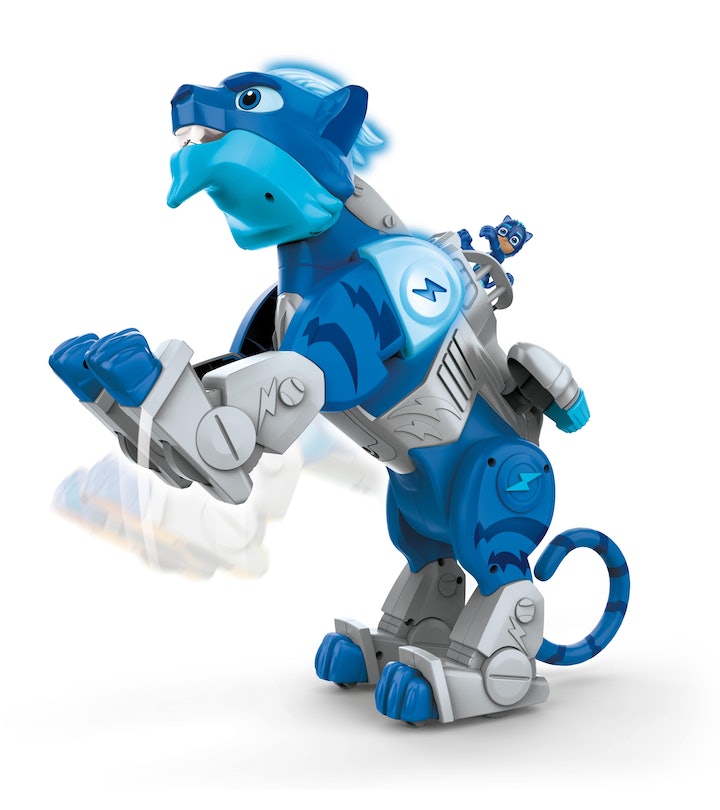 It’s time to be a hero and get this for your kid.

PJ Masks fans (okay, parents of the fans) gather round the HQ because there’s good news to share: a new PJ Masks toy was just revealed, and it can soar into your house this summer. Called the Animal Power Charge & Roar Power Cat, it lights up, moves, and talks. If you’re deep into PJ Masks fandom, you may remember when Catboy (aka Connor) touched a crystal in the headquarters and got a new power, Super Cat Stripes, which allows him to shoot stripes to tangle up a villain or move objects from afar. The new toy from Hasbro takes these powers and amp them up even more.

The motorized Cat Stripe King toy has wheels on his feet to help it glide. With the touch of a button, its head and shoulders light up, it makes roaring sounds to scare away any villains, and the toy can even charge forward and rear up on its hind legs (which makes it stand an impressive full foot tall). It also has several LED lights, catch phrases, and it even plays the theme song which is probably great news to your kid and not as great news to parents who already have the song stuck in their head on repeat.

One of the coolest things about this new toy (that helps to justify its $68.99) price tag) is that it has Hasbro Hero ID technology, which means it can recognize Hero ID-compatible 3-inch PJ Masks action figures. When it “sees” a compatible toy, it knows if it’s a hero or villain and even activates special lights, sounds, and phrases in the smaller toy. So let’s say your little one has Romeo from this set PJ Masks Hero and Villain Figure Set; when the Romeo figure is placed near Cat Stripe King it will be prompt the scientist villain to say “No Romeo is in control!” or let out an evil laugh. Included with the new toy is the Catboy action figure who says “Catboy is ready to ride!” among other iconic catchphrases when activated by the Cat Stripe King.

If your kid believes bed time is the right time to fight crime (or more accurately the right time to wear Owlette pajamas and ask for water 30 times) then they’ll be psyched about the new Cat Stripe King toy. You may not want to tell them about it just yet however, because it won’t be available for purchase until Aug. 1, and that’s a long time to wait, even for a crime-fighting child superhero.

More Like This
First Look: The New Jujube x Lilo & Stich Collaboration
Crate & Kids’s New Back-To-School Essentials Are Just Too Cute
The Best Toys For 6-Month-Olds Will Do More Than Just Keep Them Occupied
13 Cute Summer Nail Designs To Make A Splash