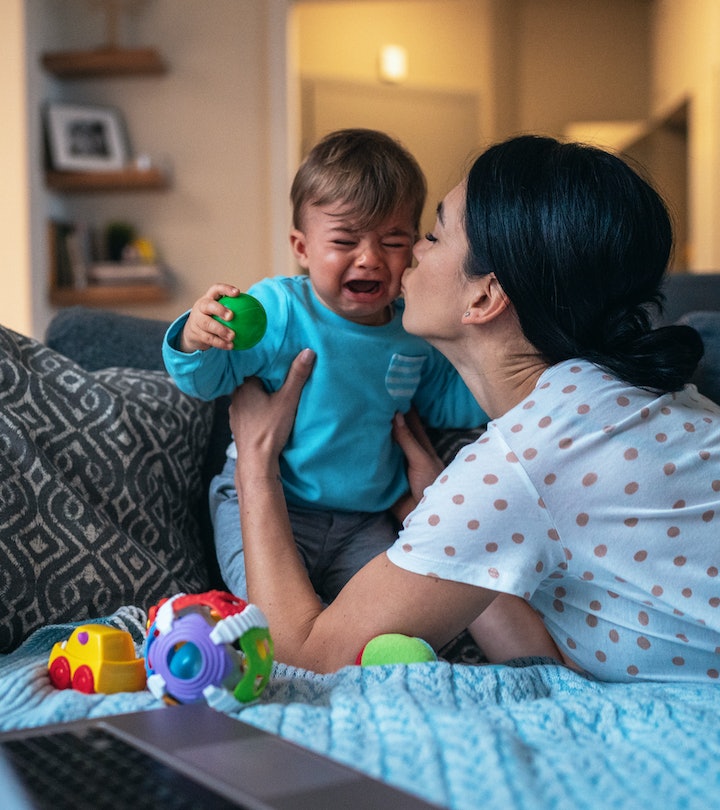 Everything You Need To Know About Parenting A Defiant Toddler

Because this aggression will not stand, man.

My son’s lovely Montessori guide told us when he joined her toddler program that she didn’t believe in the “terrible twos,” and that the stereotype is just how 2-year-olds learn. They’re not trying to be bad or defiant, they're just acting developmentally appropriate for their age. But the first time my son threw an all-out tantrum and refused to let me put on his socks — which included hitting, throwing, screaming “NO,” and falling to the floor — I started to question her wisdom on parenting a defiant toddler. I wanted to believe his guide, but it wasn't easy when he was acting like this.

Toddlers are so hard. They’re lucky they’re so cute, and I really think nature made it that way for their own safety. I also think it’s important to realize before you try to figure out how to parent a defiant toddler, that that toddler “defiance” is really just them trying out their newfound independence. They're practicing this milestone along with a lack of impulse control, all while dealing with one of the most rapid periods of brain growth they’ll ever experience, according to experts. That’s a lot for anyone, much less a little kid.

Licensed family and children mental health counselor Katie Lear tells Romper that as frustrating as toddler defiance can be, it’s totally developmentally appropriate. “Toddlers are starting to develop more awareness of themselves as individuals, while also realizing how many things they can't do on their own. It's frustrating and scary to feel so dependent on other people, and it creates a kind of push-pull effect that we call ‘rapprochement’ in therapy.”

This newfound freedom will be “quite a heady experience” and depending on your child’s personality, “this newfound power will manifest itself in varying degrees, from needing more persuasion to do something to a full-blown tantrum,” says Norland College-trained nanny Paula McLaren.

Dr. Anamara Ritt-Olson, a clinical assistant professor in the online Master of Public Health program at the University of Southern California adds that toddlers aren’t really defiant, because defiance requires a cognition they just don’t have yet. “They just don't understand consequences — the good ones or the bad ones. It is natural, normal, and important to foster independence in toddlers.” She says that according to personality theorist Erik Erikson, the job of the toddler is to learn autonomy. “They are doing that important job when they say, ‘no I want to do it my way.’ That said, we all want to be sure that we can guide them toward choices and help them to explore consequences. That defiance isn't usually aimed at you, but aimed at trying to find what they can do on their own."

Now that you know the why behind this difficult time period, it may help you better execute the “how” in parenting what feels like a defiant toddler. McLaren says, “Stay calm, and don’t rush situations. Learn which situation are triggers and pre-empt them by giving your child a warning about what is going to happen so they get used to the idea, like coming inside, getting ready for bed, sitting down to eat.”

She also says to always offer your toddler choices so they feel like they’re in control, but make sure they’re two choices of things you want them to do. For example, “Would you like to read a book before cleaning your teeth or after?” Divert rather than confront, lead by example and not by losing your temper, use language they’ll understand, be consistent, set reasonable limits, and acknowledge their feelings," she says.

Lear says, “I always advise parents to pay attention to how they respond to defiant or ‘naughty’ behavior. A lot of times, we accidentally feed the behaviors we don't want to see by giving them a lot of attention.” Because toddlers crave attention and feel secure when their parents' eyes are on them, Lear says that when we leave kids alone if they're behaving well and only come in the room to make a big deal out of things if they misbehave, we accidentally teach them that misbehaving is a great way to get attention.

“Patience and redirection seem to work best,” Ritt-Olson says. “These are things that are so difficult to find when dealing with a young child determined to do something they should not do, but it works better than just saying no.”

“Clearly showing them consistent boundaries, and letting them know safety is nonnegotiable also works. Remind yourself, we all want to raise our children to be strong independent adults, it is just those traits that are awfully challenging in a young child,” she says.

So don't scream, don't well, and really try to stay calm. “The more calm you are, the easier it will be for your child to regain their sense of calm. You can validate their feelings while also setting limits around unsafe behavior,” says Lear. And don't forget to validate your own.

Dr. Anamara Ritt-Olson, a clinical assistant professor in the online Master of Public Health program at the University of Southern California.

More Like This
Why Do Toddlers Line Up Toys? Experts Explain This Classic Toddler Behavior
The 16 Best Subscription Boxes For Every Kind Of Kid
Here’s Why Toddlers Sometimes Cry So Hard They Throw Up
The 35 Top Toys For 3-Year-Olds