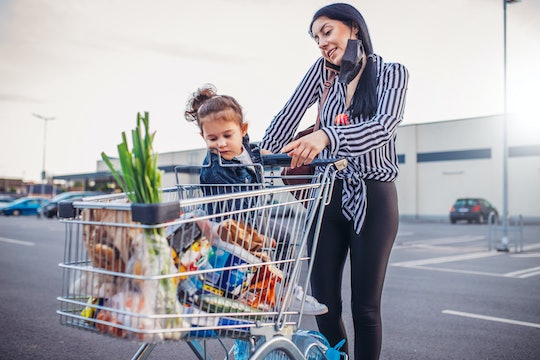 POV: You Lost Your Kid At Walmart

You looked away for a second, just a second. Literally looked at the top shelf and then down, and he was gone.

Your 2-year-old is gone. He was right there 15 seconds ago, bent over with his hands on his knees and looking at a Harry Potter bookmark on the low shelf near toddler boys’ clothes at Walmart. Your 8-month-old is still there, still sitting belted into the shopping cart, all eyes and lips and red teething cheeks. But your 2-year-old, he’s gone. You looked away for a second, just a second. Literally looked at the top shelf and then down, and he was gone.

You call out, “Jack? Jack? Come on, hon, let’s go.” You’re not scared — you’re annoyed. He wouldn’t ride in the cart like you wanted, and your husband had the double stroller in his car. That double stroller has a cup holder and seat belts and a mesh thing on the bottom where your toddler son has been known to try to shoplift toys, but still. It is your best friend, your lifeline to the outside world. It's a hot day in September, so you decided to risk a trip to Walmart alone, anyway, for the air conditioning and the sales.

You do know that Jack is gone and is probably hiding in the clothes racks like his older brothers taught him. You call him again, trying not to sound annoyed because the baby is watching, ever ready to burst into tears if you raise your voice. Nobody makes you feel as big of a b*tch as your baby does, when he's watching you lose it.

You aren’t scared yet. He is your third child, and you think you know everything.

Jack does not come. Not after two minutes. A woman walks by with a walkie-talkie and says, “Ma’am,” even though you are only 28 and cannot be a ma’am yet. “Ma’am? Are you missing a child.”

You aren’t scared yet. He is your third child, and you think you know everything.

“Still,” she says, “why don’t you tell me what he’s wearing? We can get people looking for him.”

You are embarrassed. You protest again. She insists. You tell her he is wearing his red Caillou T-shirt with blue and white striped jeans, mismatched dinosaur socks. “His hair is blond and stands up on end,” you tell her and a little something climbs up your spine. His blond hair. Sticking up no matter what.

An announcement is made, one you will later learn is the first of its kind in your town. It will make the newspaper and everything. The irresponsible mother who lost her toddler will remain anonymous. It’s what’s known as a “Code Adam,” where they shut down the store and no one can shop until the missing child is found, and we all know about it now, but this is 2001. You are told to stay where you are even though you are sure Jack found his way to the toy department.

“His hair is blond and stands up on end,” you tell her and a little something climbs up your spine. His blond hair. Sticking up no matter what.

Here is what you think at first: He is definitely not getting McDonald’s after this. I’m mortified.

Then, Is he wearing a Pull-Up or underpants? I can’t remember… He’s going to pee all over the floor.

After about five minutes you think, Did they lock the doors? He knows how to push the emergency exit button.

After 10 minutes you think, How is it possible they haven’t found him? Maybe he’s scared, I should go find him.

People have gathered around you, other staff members, customers who can’t shop now so they’re watching you for entertainment.

After 15 minutes you think, I’m never telling my husband. Or anyone. I should never have tried taking the two babies out on my own without the stroller. I should never be allowed to go anywhere alone with them again.

And you think of his sweet maple syrup breath, his sturdy little cowboy walk, all swinging arms and strutting. His open smile, so friendly. Too friendly.

The tears come, the hot, salty kind that hurt your eyes and cheeks and scare your baby who has been so still this whole time. He leans in to you around the handle of the shopping cart, pats your hand. Rests his head on your arm, stares up at you with those eyes.

Jack is somewhere that is not here. And you think of his sweet maple syrup breath, his sturdy little cowboy walk, all swinging arms and strutting. His open smile, so friendly. Too friendly. If he is gone, then so are you. You’re sorry but you will just be gone.

No one is talking anymore. Not the other customers, who are standing stricken staring at you. There is no sound. No one can help you. The time is coming when the time has run out; you feel it clawing at you.

After 27 minutes, the walkie-talkie goes off. He has been found. A man delivered your son to a young cashier at the garden center exit. Nowhere near me or the toy section or the candy aisle. He said, “I think this is the boy you’re looking for.”

You don’t know, even now, what happened. Jack was too little to explain and that man was just gone. But now you get to know what could happen, always. You get to know the thing you’ve been warned about but never fully believed, not really.

You were distracted and tired and frustrated, thinking about all of the little things in your life that were just so — what? Disappointing. You were busy being disappointed, and your son might have slipped his hand into the hand of a stranger and you only have him back because of a Walmart employee who woke you up.

Your boy was gone.

But you were gone first.

Jen McGuire is the author of Nest.