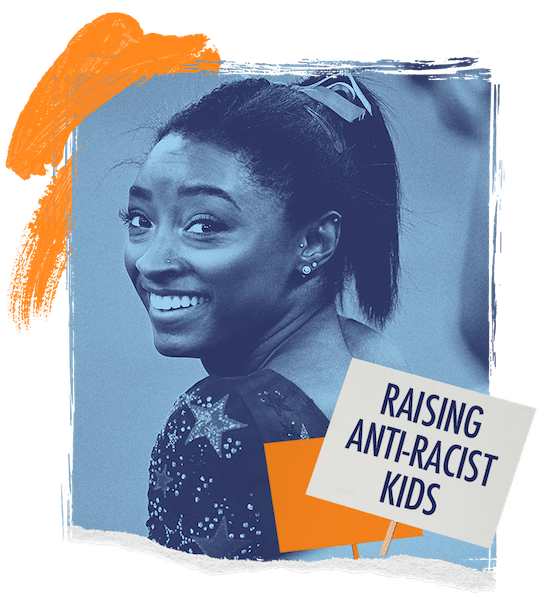 What Simone Biles’ Powerful Move Can Teach Our Kids

What Biles has shown our Black kids is a sense of humanity and self preservation that this world does not afford us.

This week, Simone Biles, one of the most decorated gymnasts ever, withdrew from competing with her team at the 2020 Olympics, citing mental health concerns. Almost immediately, the right wing erupted with attacks on her decision, with various pundits calling her a “quitter” and a “selfish sociopath.” Predicted to outperform competitors at the Games, Simone made a bold decision during one of the most visible moments in her career. When I saw the news, my first reaction was concern for her, a young Black woman under an immense amount of pressure. Then, I thought about how us parents can explain this to our children, because the lessons to be learned from Biles’ decision are important — particularly for our Black kids.

"Once I came out here [to compete], I was like, 'No, mental is not there, so I just need to let the girls do it and focus on myself,'" Biles said after the medal ceremony that saw the Russian team take the gold. With her actions and words, Biles is modeling practices that we, as parents, need to be instilling in our Black kids in order for them to not just survive but thrive. Her decision speaks to existing in a world that sees Black women as void of our humanity; that sees us as spoiled and entitled when we demand space for ourselves to exist in conditions that keep us safe. What Biles has shown our Black kids is a sense of humanity and self preservation that this world does not afford us.

In Biles’ decision lies great power to teach our kids how we must treat ourselves in the face of a racist society.

Racism exists in every system so it’s no surprise that it would exist in professional sports. In the Olympics, we’ve seen it in Sha’Carri Richardson’s suspension for a positive marijuana test after her mother died even while Megan Rapinoe is lauded for incorporating CBD into her training routine using products from her white sister’s CBD brand.

A swimming cap designed for thicker, curlier hair textures has been banned from the Olympics.

Brianna McNeal, a Black athlete, was healing from an abortion and didn’t open the door to antidoping officials, leading to a five-year suspension. Her case in particular reflects the intersecting oppressions of gender injustice and racial injustice facing Black female athletes.

Even at the top of their games, Black athletes, like so many Black people, receive the message that their humanity does not matter. They are forced to be superhuman versions of themselves when the sport demands it, but are sent the message that their value is based on how they can perform for entertainment, not in their humanity. In Biles’ decision lies great power to teach our kids how we must treat ourselves in the face of a racist society. Here are four lessons that parents should reinforce when discussing the Olympics:

There is more to life than “winning.”

My son played soccer as part of a team for the first time last spring. I must confess I wanted him to be good at the sport. I wanted him to win. It’s a natural instinct to want our kids to succeed in life. This is echoed at school, in games they play on the playground and even on social media, as the number of followers even teenagers have is tied to their “influence” and perceived impact. It’s as powerful, though, to teach our children that winning isn’t everything. The value of weighing what is being sacrificed in the pursuit of winning is a key lesson. Winning is fun but so is the joy and satisfaction of taking care of oneself. It’s OK to take a step back from the pressures of society.

In a racist society where many people view Black people as ‘criminal, unintelligent, lazy and violent,’ my success was about survival.

This is particularly important for Black kids. My parents had an almost overwhelming fear of my siblings and I not doing well in life. This led to unfair and unrealistic standards and practices around our choices of career, who we were allowed to spend time with, and the extra-curricular activities we were allowed to take part in. Now that I’m a Black parent, I see the fear my parents had: if I didn’t achieve overwhelming amounts of success, I would be judged harshly as a Black person. In a racist society where many people view Black people as “criminal, unintelligent, lazy and violent,” my success was about survival.

As parents now, though, we have a responsibility to reject that. We can teach this new generation that their humanity and wellbeing are the most important markers of success, and that they deserve to survive and thrive, even when all they can do is just be. As parents, we must reject grind culture as a basis for how we raise our children to view winning because it is a core tenet of racist capitalist systems that define us by our productivity rather than our humanity.

Prioritize your mental health above all else.

Raising children that listen to their gut, to that inner voice that knows when enough is enough, is powerful. Even as society tries to extract our humanity from us as Black people, it’s a profound lesson for kids that their mental health is a major part of who they are and should be prioritized.

Biles’ message to all is that the mental health of Black people matters.

I am honored to be raising kids in the time of Simone Biles and tennis star Naomi Osaka, two young Black women who have rejected the idea that we must hide our mental struggles and just power through. They’re saying loudly that mental stability and strength are vital tools to them as human beings and that prioritizing that means making tough decisions that are the right ones for them.

Studies show that fewer Black adolescents seek treatment for mental illness compared to their white counterparts. The rate of suicide attempts for Black adolescents rose 73 percent from 1991 to 2017. I connect this all with the stigma attached to seeking treatment, with the internalized expectation that they should “just get through it” — and to that old trope that Black people are just not trying hard enough. Black kids face the insurmountable task daily of living in skin that is criminalized. This happens on the streets and even in schools, where they should be allowed to focus on learning. Not enough resources are dedicated to the mental impact of this constant marginalization. For Black elite athletes, prioritizing mental health in the face of an institution that objectifies them is a powerful act. Biles’ message to all is that the mental health of Black people matters.

Mental health is just as important — and real — as physical health.

Described as the hope of USA Gymnastics, she, like so many Black women, is unfairly tasked with saving others, even institutions that have done harm.

Just this May, a study revealed that 51% of young people report feeling down, depressed, or hopeless. If our minds are not functioning the way they should, our physical bodies are in jeopardy too, even if those bodies aren’t executing dangerous, elite gymnastics moves. Studies show that allowing kids to take mental health days can go a long way in letting young people know that they are supported and that it’s ok to take time off to focus on your mental health. Even for athletes, mental health days are necessary. As a society, it’s important for us to show support and make space for this, even if it means letting go of how we view what athletes contribute to public entertainment.

No matter the pressure around you, your responsibility is to take care of yourself first.

I cannot imagine the pressure Biles is under. Described as the hope of USA Gymnastics, she, like so many Black women, is unfairly tasked with saving others, even institutions that have done harm. As a survivor of sexual abuse at the hands of an institution that failed to protect her from her abuser, her decision to return and compete as a survivor was a brave one and one that she should never have had to make. But she did, for the sake of the sport, for the sake of her team, and for the sake of a society that piled so many expectations and hopes on her.

Her decision to withdraw was an equally bold move to prioritize her own wellbeing over the demands of the public, even as she also prioritized what her team needed from her at that point in time. She is modeling what it means to not pour from an empty cup. She is modeling what it means to listen to one’s inner voice that must be louder than all external ones. She is modeling what it means to see one’s value as linked to one’s self-worth, as opposed to other people’s demands. It’s a lesson that every Black kid needs to learn. As they move through the world, many people will have ideas of who they are and what they should be. A clear sense of self and a strong responsibility to prioritize one’s own wellbeing are tools that will serve them well in every area of their lives and that we, as parents, need to instill in them.

Even in the face of criticism over her decision, I hope Biles sees the overwhelming support that the world has for her. She is a powerful role model for our children. Black parents have the opportunity to raise our kids to prioritize themselves and their health in the face of a society that seeks to extract their humanity. It’s a powerful act but one that is necessary to shift racist expectations and unfair policies for our children for generations to come.