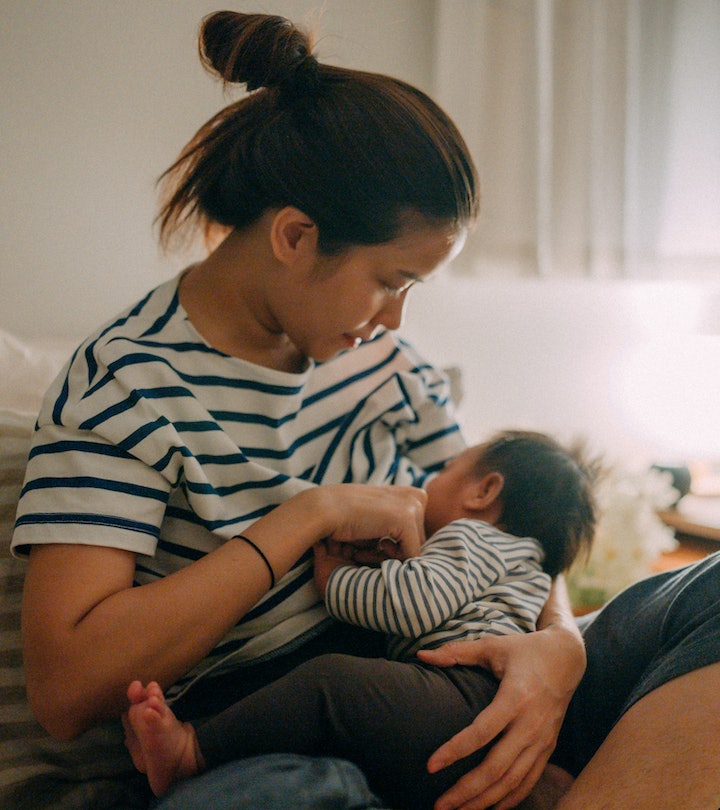 What Parents Need To Know About Sleep Training & Breastfeeding

After countless middle-of-the-night feeds and sleepless nights, it can feel so exciting to finally start sleep training your baby. But if you’re nursing, sleep training while breastfeeding can be tricky since the two concepts are kind of at odds with one another. After all, how is your baby supposed to self-soothe if all they’ve ever known is soothing themselves with a nipple in their mouth? Thankfully, like so many things about parenting, when it comes to sleep training and breastfeeding, things aren’t actually as complicated as they seem.

Can you sleep train while breastfeeding?

Yes, you can absolutely sleep train while breastfeeding, just as you can with a baby who is formula fed or drinks pumped breast milk from a bottle. Most babies have the ability to self-soothe around 4 months, as Romper previously reported, so around that time is when you can start sleep training.

“Working on independent sleep skills can certainly be done while breastfeeding,” says Jensine Casey, a certified sleep expert and owner of Baby O & I Consulting. “I am a mom of three who breastfed all my children until they were 12 months, so I know firsthand that you can be successful at breastfeeding and have a child who sleeps through the night.”

When do babies sleep through the night while breastfeeding?

Most babies are developmentally ready to start sleeping through the night between 4 and 6 months of age, as Romper previously reported, but it can actually happen even earlier than that for breastfed babies. “Breastfed babies typically start to sleep through the night at about 3 months of age,” Dr. Whitney Casares, a pediatrician and founder of The Modern Mamas Club App says. “But sleeping ‘through the night’ means they rest for a five to six-hour stretch, not for 12 hours at a time,” Casares adds. So, it’s important to keep your expectations in check as you start sleep training.

It’s possible though that your baby won’t start sleeping through the night until they’re older if they’ve learning to associate sleep with breastfeeding. “Normally developing babies who are gaining weight appropriately usually do not have a physiological need to eat at night after the six-month mark, but they may have a learned need to eat at night,” sleep psychologist Dr. Lynelle Schneeberg says. “This is called a ‘feeding-to-sleep association’ meaning that they've really only learned to go to sleep right after being fed.” This is where a solid bedtime routine and sleep training come into play.

How to sleep train while breastfeeding

No matter which sleep training method you choose to try — and there are many — developing a consistent bedtime routine is a key part of settling your little one down for the night. When your baby is very young, they might nurse until they fall asleep, so your bedtime routine may need to change as you start to sleep train.

As you approach sleep training while breastfeeding, Schneeberg recommends feeding happen early on in the routine. “A parent would simply move breastfeeding — or breast milk fed from a bottle — from the final step in the routine to an earlier step and then finish up with, for example, a final diaper change and a book or a song before the baby is put into the crib,” she says.

Every family’s bedtime routine will look a little different, but the key is to nurse first, and then finish up your bedtime routine so that your baby stops associating breastfeeding with sleep. “While we want them to get comfortable and be winding down to sleep, we don't want to make that feed a time where it is impossible to stay awake,” Casey explains. “Keeping an eye on your baby to keep them awake during the feed by interacting, keeping the lights on or dim and the sound machine off will help when the next step in sleep training is putting them into the crib awake.”

Should I do a dream feed?

A dream feed involves nursing your baby without waking them up, and doing so is really a personal choice, but if you’re sleep training, experts don’t recommend using this method. The thought process here is that you can “top off” your baby’s tummy with a bit more breast milk right before you head to bed so that they won’t wake up hungry quite as soon as they would have without that one last sleepy feed.

“I am not a fan of dream feeds and don't recommend them as the goal is to extend that first stretch of sleep after bedtime to get longer, not interrupt it,” Casey explains. “Dream feeds often do not get you longer stretches after that, but do cause a disturbance in your child's sleep cycles that will end with more night wakings than they may have done if not woken for a feed.”

Inevitably, your breastfed baby will probably wake up in the middle of the night while sleep training at some point or another. When this happens, the sleep training method you’re using and your sleep training goals will determine your course of action.

“Whether you feed your baby in the middle of the night really depends on your goals,” Casares says. “I generally advise parents to start with the goal of having their baby go to sleep on their own. If that’s where you are in your sleep training journey, you’ll still likely be up feeding your baby several times during the night.”

Sometimes, your baby might wake up just an hour or two after you put them down. While this is less-than-ideal, you can try some of the above sleep training strategies to help them fall back asleep instead of nursing. “If they wake sooner than three hours from their last night feed, or have already had a night feed I would suggest using the same strategies — be it timed check-ins or crib-side soothing — that were initially used at bedtime when they were placed into the crib awake,” Casey says.

Even if you do choose to feed when your baby wakes up, keep in mind that breaking your baby’s association with feeding to sleep is still key to an eventual restful night for everyone. So, Schneeberg recommends following the same post-feed steps from your bedtime routine during middle-of-the-night wakings as well.

No matter how your sleep training journey unfolds, your baby will learn to sleep through the night at some point — and eventually they’ll wean, too. (I know.) Every baby is different, so just try to take things one night at a time.

More Like This
Even If Your Baby Sleeps Better in Your Bed, It’s Still Not Recommended
What To Do If Your Toddler Keeps Taking Off Their Diaper At Night
When Does A Baby Recognize Their Father? A Pediatrician Explains
Tips to Beat Jet Lag, For You & Your Kids
What Parents Are Talking About — Delivered Straight To Your Inbox