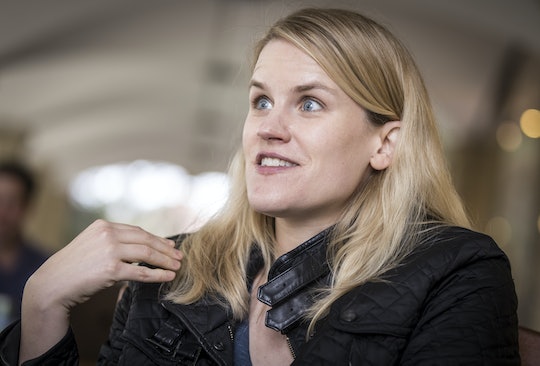 On a Zoom call with Romper the day before she was set to appear at the Mom 2.0 Summit on a panel about online safety last month, Frances Haugen does not mince words: What we are facing is nothing short of a public health emergency.

Haugen is a former Facebook data scientist who made international headlines as the whistleblower who disclosed internal documents to Congress and the SEC about how the tech company’s choices knowingly negatively impact kids’ mental health. Haugen has been on an accountability crusade ever since, and wants everyone to know that her former employer (now named “Meta”) in 2021 has deliberately misled the public about the impact of its products on the mental health of children and young adults.

Haugen wants to be clear that if kids in your home cannot tear themselves off Instagram or TikTok, the blame does not rest with parents and caregivers. The addictiveness of the platforms is by design. This is a much bigger problem than a parental oversight issue.

Social media companies could have been putting safety measures on their products to save lives long ago, she points out, but they simply chose not to. “This is not a problem with your child. This is a problem with product design.”

Her speech cadence is fast and intensifies when she talks about the challenges inherent in a new generation of parents trying to shepherd their children through social experiences they never had.

“It's really unfair to parents that they're facing these burdens alone,” said Haugen, 38. “We need to, as a community, acknowledge that there's a whole playbook that none of us got to inherit from our mothers. We have to figure out that playbook together.”

Haugen believes that if anyone has the influence and moral authority to make change, it's mothers. Which is why, Haugen sat alongside a medical doctor, a therapist, and a lawyer to talk about the mental health effects of social media on kids, at the Mom 2.0 Summit in Los Angeles in April. Haugen, in a dark blazer, skirt, and tights, listened intently to the other panelists while spinning her foot in circles, as if she couldn't wait to jump in with another anecdote or statistical point.

In a room full of seasoned parents, there was no need to debate that social media could be bad for kids. Studies show that as teen social media use has increased in the past decade; so too have suicide rates. Yet American kids as young as 8 years old are increasingly using social media to post videos of their fluffy pets or to lip-sync to Missy Elliott.

Shelby Knox, the impassioned campaign director for online safety at ParentsTogether, points out that social media use can lead to negative body image, disordered eating, depression, and even suicide. The national parents advocacy organization, a sponsor of the Mom 2.0 Summit, recently launched a petition calling on major tech CEOs to design safer products for children.

“These platforms also expose children to predators and risky behavior,” said Knox, “like the viral challenges that have taken the lives of hundreds of children without anything but empty platitudes from Snapchat, TikTok, YouTube, and Meta.”

If moms protested at the bus stop near Meta’s headquarters in Menlo Park, California, for instance, Haugen says she could almost guarantee the company would roll out more safety measures.

For Haugen, the conversation is personal: Before she was a whistleblower, she was a high school debate coach. Before that, she was a 14-year-old who watched a friend’s heart stop beating from an eating disorder. In her current role as an advocate, Haugen often speaks with parents of children who died from eating disorders or suffered from severe self-harm. From the parents, she hears the same lament: I didn't know that my kid was looking at disturbing stuff on social media for months before they died.

“It really breaks my heart because I know that Facebook could have done things to prevent that kid from rabbit-holing,” said Haugen. She is not a mom, but she fights like one: She points out that these companies will not make changes unless parents hold them accountable. If moms protested at the bus stop near Meta’s headquarters in Menlo Park, California, for instance, Haugen says she could almost guarantee the company would roll out more safety measures. “Because they're going to be terrified that their employees are going to ride the buses for 75 minutes from San Francisco and then have to walk half a mile past angry mother saying, ‘Please stop killing my children.’”

But, until tech companies make their products safer, Haugen says it’s important to educate kids about the potential harms of social media and to encourage them to take care of each other. “How do we care for each other? Because you may be the child that saves your friend's life.”