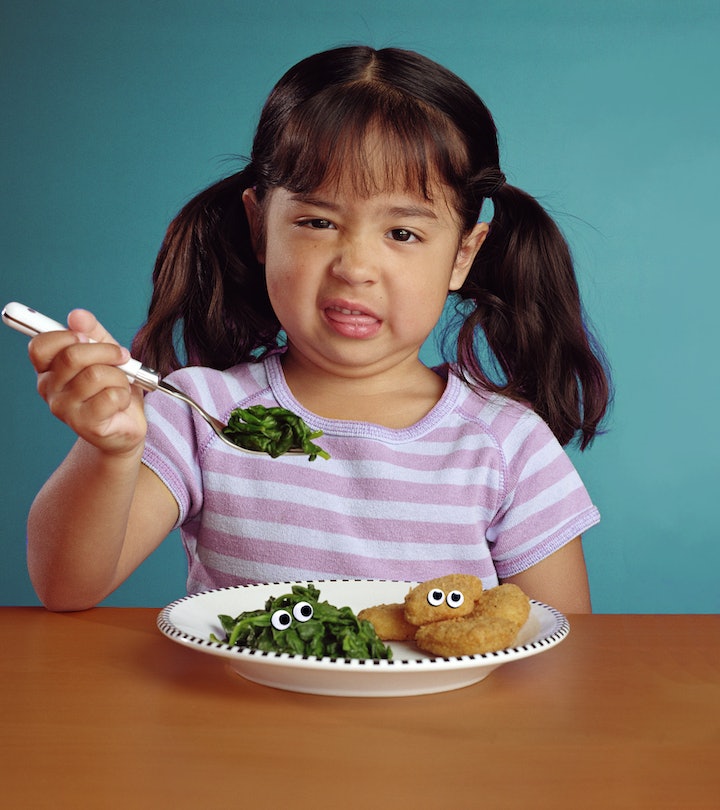 You can't control it, so don’t sweat it.

Before I had kids, I was certain — in the obnoxious way that only pre-parents can be — that I would not have a picky kid. I’m a food person. And I don’t just mean that I like food; I mean that I worked in the food world, professionally, for more than a decade. I have a graduate degree in food studies from NYU. I apprenticed under a chocolatier for four delicious years, then as a cheesemonger at a fancy shop in Manhattan. I buy as much of our food as possible from our local farmers market. I’ve thought hard about food, personally and professionally, for all of my adult life, and I work hard to make meals that are delicious and (at least in theory) appealing to my small children. And still, our almost 5-year-old, Griffin, subsists largely on ice water, Elmo pouches, giant out-of-season strawberries, and sour gummies.

It didn’t start out that way, of course. At the time Griffin was born, I’d gone so deeply into my passion for all things “local food system” that I was making tiny-batch, hyperlocal, pectin-free jams and selling them at markets around Portland. My baby was on my hip behind a farmers market table from the time he was 8 weeks old, and his first bite of real food was the first raspberry of the season.

Isn’t that so great? He was driving out to farms with me from the very beginning. I have photos of him, reaching out from his snug spot in the Ergo, plucking berries and eating them right off the vine. I read Baby Led Weaning so that I could totally reject it as an anecdotal, stress-inducing woo-woo approach to introducing solid foods to babies, and felt free to approach feeding my kid my own way. “My way” pretty much amounted to feeding him things that were naturally soft (like ultra-ripe pears and the aforementioned raspberries) and anything that could be pulverized by an immersion blender (like lentil soup).

Like many kids do, my lentil soup lover evolved into a classic picky kid.

Like many kids do, my lentil soup lover evolved into a classic picky kid. Along with first phrases and potty training came increasingly frequent announcements that “remember, I don’t like [insert name of a formerly-favorite food here]!!” Cheese is a recent addition to the “no thanks” list. Apples are long gone. Vegetables haven’t been tolerated since the immersion-blender days. Potatoes are acceptable only in fried form, and even then are usually picked at reluctantly. Yogurt must not have chunks, ditto peanut butter, ditto anything that could ever possibly be suspected of having sneaky chunks. Whole wheat bread with seeds, for example, would qualify as a food with chunks. Most granola bars are viewed with suspicion, and chocolate chips do not suffice as an enticement. Surprisingly, olives are OK, but only if they’re the black ones from a can. This list is ever-changing. I’ll update you as the situation develops.

Having a picky 4-year-old is not weird. In fact, “my kid is so picky” has become shorthand in our community of billions for “I have a preschool-aged child.” Cue the eye rolls, hand-wringing, the mom guilt, and the sharing of a sacrilegious brownie recipe ruined by the addition of puréed leafy greens.

Yet despite all of the parental fussing that surrounds this topic, picky eating is developmentally normal and perhaps even evolutionarily protective. I have a sheaf of studies that say that picky eating is both typical and universal — particularly in little kids between the ages of 2 and 6 years. It also turns out that picky eating is possibly genetic and (for most kids) does no long-term damage. Really, it doesn’t.

I like having this arsenal of studies to back me up, but even without all of this bolstering of my instinctual nonchalance, what’s notably weird about this parental milestone is not the emergence of picky eating in my kid. It’s that it doesn’t bug me. I don’t care. For once, I met a mothering trip point and continued on, unfazed.

As a mother, my every parenting step is hyper-analyzed (by me), scrutinized, and circled with hawk-like dedication. But extreme picky eating in my firstborn? This one I’ve met with a shrug. This approach is so against my nature as a mother that what I mostly feel is joyful, giddy relief.

When Griffin started rejecting food, I guess what happened was simply that I trusted him, too — his body, his palate, his preferences, his need to assert himself.

Most of us enter into parenthood without any particular expertise in caring for babies. We learn from scratch, a baptism by fire and frantic Googling. I knew nothing about newborns or swaddling or breastfeeding or baby sleep or the best shoes for early walkers or pincer grasps. But food — feeding and eating and how to feed and when and what to cook and how to cook it — was the one area of mastery that I brought to motherhood.

In this one slice of parenting work, I trusted myself. And when Griffin started rejecting food, I guess what happened was simply that I trusted him, too — his body, his palate, his preferences, his need to assert himself. I just let it unfold, this new pickiness. He told me how he felt — that whatever food I was offering didn’t taste good to him. And I said “OK.” Food preferences are a huge piece of our personality puzzles, even as adults. So, it made perfect sense to me — as a person to whom food has always meant a lot — that it was a way he’d assert his identity.

I’m not here to pat myself on the back for not feeling guilty (though I am proud of myself for that). I’m here to absolve you: To save you from guilt-scroll purchases of momfluencer recipe packs that promise to teach you how to get your picky kid to eat vegetables. To give you a taste of relief, to ask you to trust yourself and trust your kid and let them be picky. Sure, cook healthy food, and ask them to cook with you sometimes. Offer them vegetables. But mostly, maybe just leave them alone, for your sake and theirs. Even the American Academy of Pediatrics thinks parents stress too much about their kids’ picky eating habits.

If you’ve got a picky kid and you’re over there agonizing about where you went wrong, I need you to know that I am certain that I did everything “right” — I dragged him to the farmers market, I let him stir and chop and wash, we grew food together in our garden — and he remains a picky-as-heck kid. And yes, that means if you did all this stuff and your kid turned into a ravenous little foodie, eagerly volunteering to eat mushrooms and eggplant and sushi, well, you don’t get to take credit either. That’s just your kid. And if you have a picky kid, you didn’t do anything wrong.

More Like This
Even If Your Baby Sleeps Better in Your Bed, It’s Still Not Recommended
A Parent’s Guide To Stomach Pain In Kids
When Does A Baby Recognize Their Father? A Pediatrician Explains
What To Do If Your Toddler Keeps Taking Off Their Diaper At Night
What Parents Are Talking About — Delivered Straight To Your Inbox