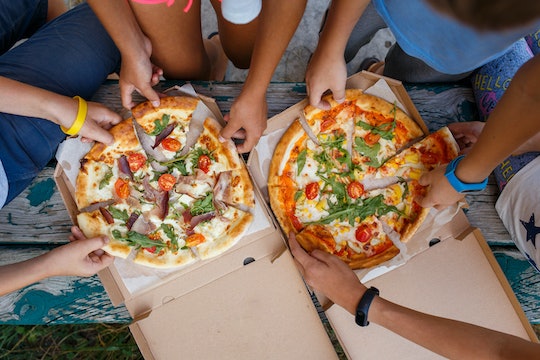 I’m sorry, but some of us can’t afford to feed everyone else’s kids.

So I did a thing when my kids were little that was just not done. There were these kids who lived down the road, I think they were 9 and 10 years old or something, and from the day we moved in, they just sort of showed up. At first it was fine, nice to have some kids living on the street and all that. But then they started to migrate at meal time. Or snack time. I never met their mom; they would just sort of walk in and tell me they were so, so hungry and, because I was raised in Canada and this is what we do, I would feed them. Feed them food I really couldn’t afford to share, what with the four boys I was raising. But I fed them. Extra chicken fingers from the freezer, extra casserole. Extra everything.

Until one day I guess I became Swedish. I had made blueberry muffins for my kids for after-school snack, the big bakery kind that mean you only really get six instead of 12 muffins. I wanted one of those muffins, too, OK? It was blueberry season and I had gotten actual real blueberries from the market. I used Greek yogurt, too, for the first time and I was positive these kids would not appreciate the Greek yogurt-ness of my lovely muffins. Plus there were only six. So when the neighbor kids came in (without knocking, I need you to know that part, too), sniffing the air and saying, “Mmmm, something smells good!” I said no. No, they could not have a muffin. My own kids wouldn’t look at me when I stood in the kitchen, one pink oven mitt still hanging from my hand as I denied these children some food.

That’s the thing I did. I told kids they couldn’t have my food. And I really wish I had known about #Swedengate back then because I absolutely would have used it for an excuse. I am blond-ish, so I would have lied and said it was part of my culture, because the lying would not have seemed as bad as telling kids they couldn’t eat my food.

I was supposed to stand in the kitchen, all loving and proud, smoothing down their hair while I made them snacks, chuckling softly to myself about growing boys and pulling extra food miraculously from the fridge I knew to be empty.

You’ve heard the story by now. All about how it’s a thing in Sweden for parents not to feed their kids’ friends when they’re visiting and oh, how monstrous, how could any parent allow someone else’s kid to go hungry?

To this I say: How can anyone send their kid to another parent’s house without any idea whether or not they can afford to give out food? It happened to me all the time. Truly, all the time because my boys had friends and they liked to play at our house. Which was fine except for all the food they ate.

I might have PTSD from all the times the door would bang open after school and a trail of kids would walk in, starving. “Literally starving,” they always said because I guess no one told them what “literally” meant. And I was supposed to stand in the kitchen, all loving and proud, smoothing down their hair while I made them snacks, chuckling softly to myself about growing boys and pulling extra food miraculously from the fridge I knew to be empty.

Instead I would get flustered, trying to remember if my freezer held both hot dogs and hot dog buns. Wondering if the ketchup bottle would hold out while my ketchup-obsessed son stood looking at the fridge with me, wondering the same thing. I would gather up my change to go to Little Caesars for a few “Hot and Ready” pizzas and pray they’d last. Pray they were enough.

I had entire summers of extra boys who lived at my house without ever hearing a word from their parents. Loading up six, yes six, kids into the minivan to go to the drive-in and everyone wanted candy, wanted popcorn, wanted their own soda, no sharing.

My friends, though. The adults in my life. I wanted to feed them.

I was the only one sharing. And I’ll tell you, I would have rather been feeding my adult friends instead of all of these extra kids who only wanted more of everything. My friends, though. The adults in my life. I wanted to feed them. Make them good lasagnas with the parmesan all brown and crispy on the top. This French recipe I found called Grandmother’s Chicken that uses up all the cheap chicken parts in a sauce with mushrooms and bits of bacon that tastes like nothing you’ve ever tasted. With a bottle of wine maybe, a big salad. A baguette.

For them, I would have done anything to stretch my budget. But my culture doesn’t worry so much about feeding other adults. Only everybody’s children, whether you want to or not. And don’t even get me started about the parents telling you what you have to feed their kids or what you can’t, like when I used to give my kids Sundae Fridays with a little sundae bar and a friend lectured me about giving her three (three!) children sugar when she sent them over for after-school snack.

Jen McGuire’s book of essays about life after your kids grow up is available now.