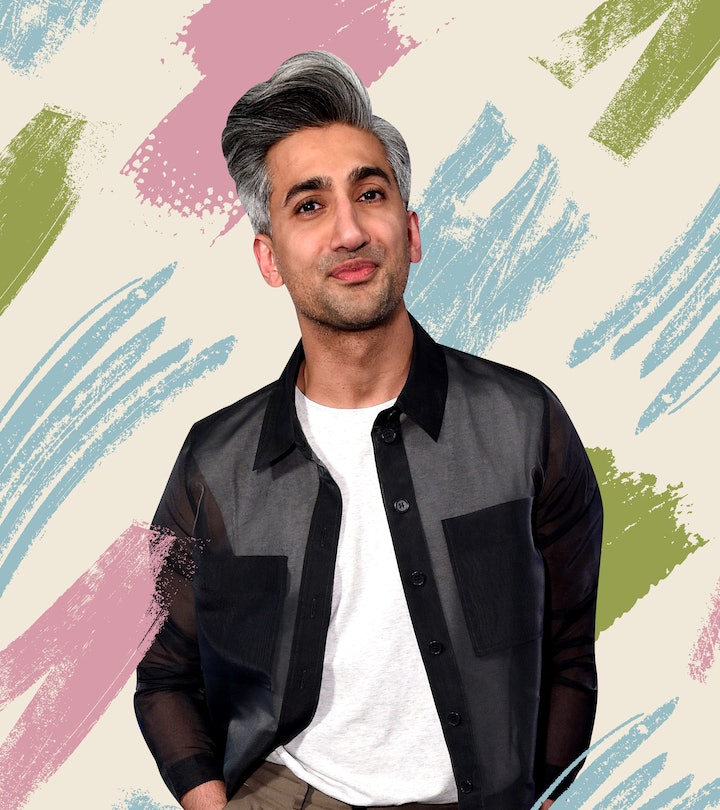 My Dream Was Always To Be A Stay-At-Home Dad

On my first date with Rob, the man who would become my husband, I told him I wanted children. My dream was to be a stay-at-home dad and to be married. “I want four or six, preferably six children,” I told him. Then I told him the names that I’d already picked out for my first two. Clearly, I did not play it cool. But Rob loved the names I’d chosen, and that was one of the reasons I thought, Oh, this might be my person.

Rob and I married a year and a half later, and we were eager to start a family, but life got in the way. I was living in the United Kingdom and couldn’t get a green card, and Rob, who was a pediatric nurse, needed to keep his job in the United States. We had just sorted all our affairs and were planning to begin the surrogacy process when I got a call from the Netflix team to offer me a job on Queer Eye. That put a wrench in the works. Life got insane.

Then COVID happened, and suddenly the busyness stopped. At the time, we thought we’d have six weeks off. It’s ridiculous now — we were silly to think we’d be back to normal in six weeks. But we decided to use that social distancing time to go through this process.

We decided on surrogacy as opposed to adoption. A lot of people ask about this, and a lot of people have really aggressive opinions that they insist on sharing. The way I feel about it is this: If adoption is right for you, it’s right for you. If surrogacy is right for you, it’s right for you. You go with the option that makes the most sense for your life. I see the benefits in both, but Rob and I always felt clear that we wanted a surrogate. Also, people may not realize what a difficult process it is for gay parents to adopt. We have extra limitations and extra hoops to jump through.

People do have misconceptions about surrogacy, and some have said horrible things to me, like suggesting that Rob and I are mistreating women, as if we had someone chained in our basement. I assure you that isn’t the case. We worked hard to find an agency that we love and the woman we chose as our surrogate is incredible. She first became a surrogate for her sister who couldn’t carry a child to term, and she’s continued to do this work because she’s committed to helping people who want to become parents. We know that we’re blessed to have her. We’re in constant communication. Because we can’t see her in person right now, we FaceTime with her and text all the time to make sure she’s doing OK and to get updates about the baby. We hear about his first kicks, and what side he’s pressing against, and when he gets the hiccups. And often we’ll use Zoom to join her doctor’s appointments.

I don’t like to get into it, but we had some false starts before we found our current surrogate. It’s been a long road to get here, and so after the initial embryo transfer, Rob and I were both on edge as we waited to find out if it had worked. For those 10 days, I felt physically sick. I feel bad for whoever hired me for that week because I was not good at my job. I couldn’t focus because I was just praying so desperately that it would take. We’d been warned that often the first try doesn’t work. We learned that we were pregnant on Christmas Eve. Rob and I were sitting on our couch when we got the call from the agency, and then we hopped on Zoom to celebrate with our surrogate. We were ridiculously happy.

That was the moment it became real to us that we were finally having a baby. We waited years for that moment.

But even after the good news, I was so worried that something would go wrong. There have been a couple of times in my life where I’ve felt extreme stress and sorrow and at those times, all I want to do is sleep. I go to bed, turn off my phone, and pull the covers over my head so that I can pretend the world doesn’t exist. There was a lot of sleeping during that wait — a lot of sleeping.

But Rob is a stronger person than I am. He’s been the rock in this relationship at every turn, and he was the one who kept saying, “It’s going to be fine. If something goes wrong, we’ll deal with it.”

Then we got to the six-week mark. The technician put on the ultrasound and he was tiny — he looked like a bean. They scanned for the heartbeat and we could hear it. Rob and I were sitting on the couch in our home, watching it on Zoom, and he and I both cried our hearts out. That was the moment it became real to us that we were finally having a baby. We waited years for that moment.

Since then, I’ve been obsessed. I have the What to Expect app installed on my phone and I look at it every day. It helps me understand what our surrogate’s going through and how our baby’s developing. I think the first day I found out that he was starting to form fingers, that blew my mind. Every Friday, while we make coffee, Rob and I get on the app together and we look at what he’s been through this week and what size fruit or vegetable he compares to. I’m skeptical sometimes because he seems to fluctuate from the size of a pea to the size of a watermelon. Honestly, I don’t know what metrics they're using.

I think that people expect that I’m going to have this pristine nursery set up and I’m going to buy my son Gucci. That couldn’t be further from the case.

As far as physically getting ready, here’s the thing: You can take the boy out of Pakistan, but you cannot take Pakistan out of me. By which I mean that Rob and I aren’t fancy. Because I’m the fashion guy on Queer Eye and we’re meant to be the arbiters of taste, I think that people expect that I’m going to have this pristine nursery set up and I’m going to buy my son Gucci. That couldn’t be further from the case.

I was raised in a poor family. My parents were immigrants. My brother and I stayed in my mum and dad’s room until we were 9. All my siblings shared bedrooms. The nursery is a very Western concept, and for me, it feels a little extra. Rob came from a working class family also. He was raised on a ranch. They had a crib in the corner of his parents’ room. And so although we’re very lucky, although we have a life that we could only have dreamed of when we were children, we don’t always live like people who have that kind of life. We’re still mentally our parent’s children. So, we haven’t done a nursery. We have a bassinet — which we call a Moses basket, which I think is a much nicer name — and that will sit next to our bed.

As far as clothes go, people ask me all the time which designer clothes I am going to put on my baby. None! You’re not going to see my kids in designer clothes for a very long time. I would like to believe we’re going to be practical parents. His nappy’s going to need changing, and I don’t want to mess around with trying to change some stupid baby-couture thing that he’ll grow out of in a week. He’s going to be in onesies every day until he can walk and then maybe we’ll put him in something a little fussier.

We love that our child will be multicultural. We want to create a space where he understands that he’s neither just white nor just brown. He’s special. I grew up speaking Hindi and Urdu, and I want my child to understand both sides of my family. Rob will be the one who speaks English with our child, and I will speak Hindi and Urdu. Preparing for the baby has meant that Rob is starting to learn these languages so that he can follow along too.

Both Rob and I were raised in religious households — Mormon and Muslim — and many of those values are deeply important to us. I want to raise my children with a South Asian understanding of respect, and I want to keep our kids close to the nest. But we don’t want them to leave the nest at 18 and be shocked by the world or miss all the pop-culture references, so our kids will have more access to music and culture than we had growing up. There are so many Bollywood movies that I can’t wait to watch with my kids.

We’re feeling as prepared as one can feel without really knowing what it feels like to be a parent. Rob says the only thing he’s worried about is that he looks 20 years older when he doesn’t sleep, and he’s worried he won’t be able to find time to work out and stay healthy. I’m not worried about any of the post-baby challenges. For me, I just want our baby to arrive, and I feel like whatever comes after that will be fine.

We’ve been in such close contact with our surrogate, we fully intend to stay in touch with her for life. She’s giving us the greatest gift one could ever give a person, and so it would feel strange to be like, “OK, thanks so much. See you.” And it’s not just for us; it’s for our kids in the future to know their own story, to know who took care of them before their dads took care of them.

As told to Jennifer Berney