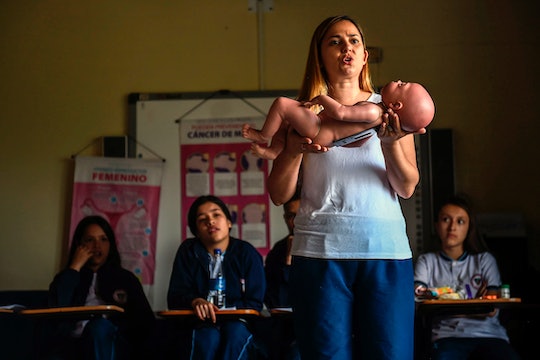 I’m Still Grateful For My Boys' Sex Ed Teacher, All These Years Later

I am not the kind of mom who is good at talking about sex. She taught them what I could not.

I tried on my own to educate my boys about sex; really, I did. For a few years I was gripped with the awesome responsibility laid at my feet, to send four men out into the world who were evolved and thoughtful and responsible when it came to sex. Or their bodies or women’s bodies. They would not get shelter from me if they were going to be neanderthals, oh no. But the thing is, I am not the kind of mom who is good at talking about sex. I don’t know if I can blame it on the fact that I have sons or maybe I’m a prude or those years of Catholic school are still simmering somewhere deep inside me.

I never learned the sex language, I guess. Not as it applies to my sons and probably not as it applies to me either. I should be better, since I mostly learned about sex from stealing my mom’s Harlequin romances and not from the nun who was my sex-ed teacher at Catholic school. But it turns out “turgid shaft” and “aching loins” are not the words best used with your own sons to describe intimacy.

Their sex-ed teacher had the words, though. And the patience. And the kind of frank comfort with bodily functions that both amazes and repels me.

A single mom needs all kinds of co-parents. Coaches, co-workers, friends, relatives, the lady behind you in the grocery store who says “you go grab those onions you forgot while I keep this one company.” And for me, one of those co-parents was my sons’ sex-ed teacher. I think of her all the time. I hope she knows.

Without the guidance of that sex-ed teacher, I would have worried about my sons. She taught them what I could not.

He was not yet old enough to be in her class but she explained it to him all the same. “I figured you would want me to explain it for you,” she told me when we were volunteering on a field trip. I did not stoop to pretending I wanted to have that discussion with him. We both knew the truth. And so our relationship was born.

This same son, just 9 years old, became something of a wunderkind in the sex-ed department, all with her thoughtful, sensitive tutelage. Case in point: When I was out buying tampons one day and my son was with me, he asked me what I had in my hand. “None of your business,” I said, all maturity, hiding them under my coat. He nodded sagely, “Ah yes. The tampons. They are to soak up all of your blood.”

This brought me back. To a few years earlier and a conversation in the living room, desperate to explain menstruation while they tried not to make eye contact, I had just read The Red Tent and ended up breaking down sobbing and saying, “You’ll never get it, do you hear me? You. Don’t. Get. It!”

Another day after the sex-ed teacher entered our lives and everything changed. My son and I, floating on our backs at the lake all quiet. Then out of the blue, he said, “Mom, does it make it rough?”

“What?” I responded, my guard down.

“Your menopause. Does it make the intercourse rough?”

My co-parenting sex-ed teacher who has probably long since forgotten my name but who will remain with me through the ages.

It seemed he had been given pamphlets upon request by his sex-ed mentor when she found herself too busy to spend every waking minute of every day discussing human bodies with just him. He had availed himself, reading his way through puberty then sailing on through to the twilight of my life, menopause.

Without the guidance of that sex-ed teacher, I would have worried about my sons. She taught them what I could not. One asking me about my menopause and the other talking frankly about his penis and where the hair would someday grow and how that’s OK, it’s normal. It would have fallen to me to talk to them about sex, about their bodies, about all of it.

Probably my sons and I are still awkward about sex but we manage to present as fairly normal. All because of her. Definitely not because of me.

The thing is, I’m a regular human who has a weird relationship with sex language and I don’t get to just stop being weird because I’m a mom. Which is why I will forever be grateful for the true professionals. My co-parenting sex-ed teacher who has probably long since forgotten my name but who will remain with me through the ages.

If only she’d been around when I was a kid. How things might have been different.