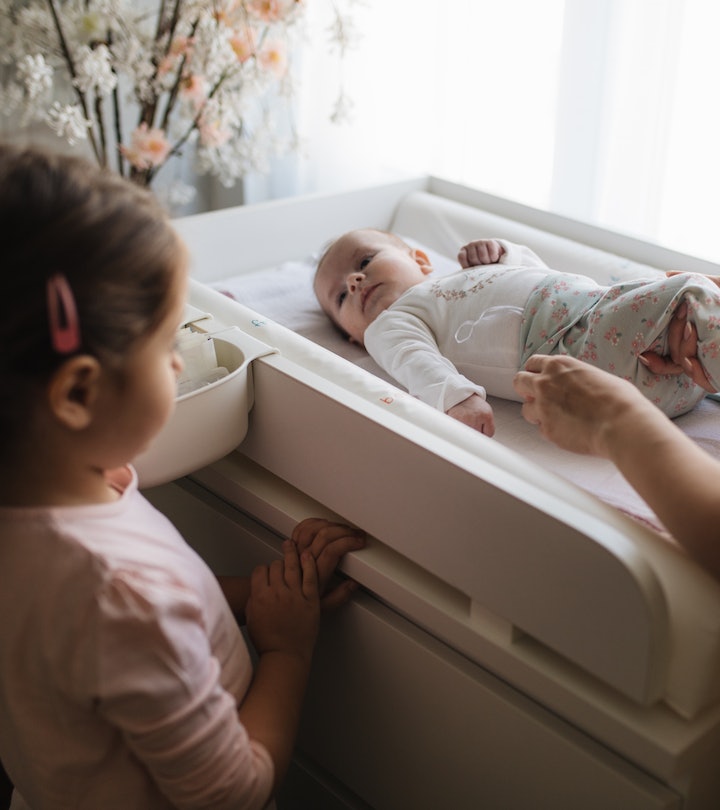 Toddler Jealous Of New Baby? Experts Explain How To Cope

Sharing is caring, but toddlers aren’t great at it.

Adding a new baby to the family is a major adjustment for everyone. Sometimes, especially young kids don’t really process what’s coming until that precious bundle of joy arrives and suddenly, there’s a new sheriff in town, so to speak. Unfortunately, this abrupt change can lead to toddlers feeling jealous of the new baby. For such little humans, they have pretty big emotions and it can be hard for parents — especially the one recovering from giving birth — to deal.

Your Toddler’s Jealousy Is Totally Normal

Though you’re pregnant for months on end, it can feel like your entire world changes immediately after birth. As it turns out, your toddler goes through the exact same thing. Neuropsychologist Dr. Sanam Hafeez tells Romper that toddler jealousy over a new baby is “completely normal and common.”

“Many toddlers feel excitement at the thought of having a new sibling until that sibling arrives and takes the spotlight and time from them. Often the attitude can change to, ‘I didn’t ask for this new baby,’” Hafeez explains. She says that this is often a toddler’s first experience with the emotion of jealousy, calling the new baby’s arrival “a massive shift for them.”

“Up until that point, they were the ‘star,’” Hafeez continues. “Until they bond with their new sibling and develop emotional ties, the jealousy may linger as they get used to a new little human in the home who is taking one or both parents' attention and time away from them.”

It’s a pretty universal truth that toddlers don’t like to share. If they don’t like to share their toys, it makes complete sense why they wouldn’t want to share a parent with their new sibling, but jealousy over a new baby won’t happen with every toddler.

“Children’s temperament has a lot to do with how well, or not, they adjust to having a new sibling,” psychologist Dr. Dan Peters, tells Romper. “Children who tend to be more flexible and independent often have an easier time than sensitive children who are accustomed to focused attention and routines.”

Signs Your Toddler Is Jealous Of The New Baby

Unfortunately, some of the same behaviors that toddlers are notorious for can manifest thanks to what Bright by Text parenting expert and mom of three, Jodie Fishman, MPH, MCHES, calls “the green-eyed monster that is jealousy” when a new sibling arrives. Among the laundry list of signs, Fishman names temper tantrums, clinginess, regressions, irritability, and more.

“The big sibling may also speak negatively about the baby or the parents,” Fishman says. “I remember when we brought my son home, my then 2-year-old daughter asked when it would be time for him to go home. When we brought home another baby shortly before she turned 4, she would barely speak to me for the first few weeks and insisted that her father make her lunch or put her to bed. I'm happy to report that they get over these feelings fairly quickly in the scheme of things.”

Peters explains that while there are a number of signs to indicate jealousy over a new sibling, regression is most common. “The primary way that toddlers express jealousy is through regression — going back to previous behaviors they have grown out of such as eating with their hands, wetting their pants, and having tantrums,” he says. “They may also show jealousy by saying they don’t like the baby, want the baby to go away, and even that they don’t like their mommy. Hitting, both their parent and baby, is also common.”

How Parents Can Cope With A Jealous Toddler

It can be helpful to prepare yourself for what Hafeez calls “combat” with a jealous toddler. “Toddlers might pinch their siblings, throw toys, or even hit them in a bid to get your attention,” Hafeez explains. “Of course, your gut instinct will be to shout. First, make sure the baby is OK. Put the toddler in a time out so that he/she is not getting the attention that was desired and realizing that behavior is unacceptable.”

Hafeez explains that it’s also a good idea not to compare your new baby to your toddler. “Even when you are totally stressed out, don’t ask your toddler why he/she can’t be more like your newborn,” she says. “That is a recipe for trouble/sibling rivalry.”

Preparing your toddler for the adjustment of having a new baby is another important step in coping with this change. “There are many things a parent can do to help their child adjust to their new sibling,” Peters tells Romper. “First, it is important to remember that their child can love the idea of being the big brother, but they have no idea what that really means — cutting their parental attention in half or more, not being able to do as many fun things because ‘the baby is tired, too little, sleeping, etc.’ It is important to validate their child’s feelings about it being hard to share their time with them and can be frustrating that their little sibling is not able to play with them yet.”

Tips To Help A Toddler Adjust To The New Baby