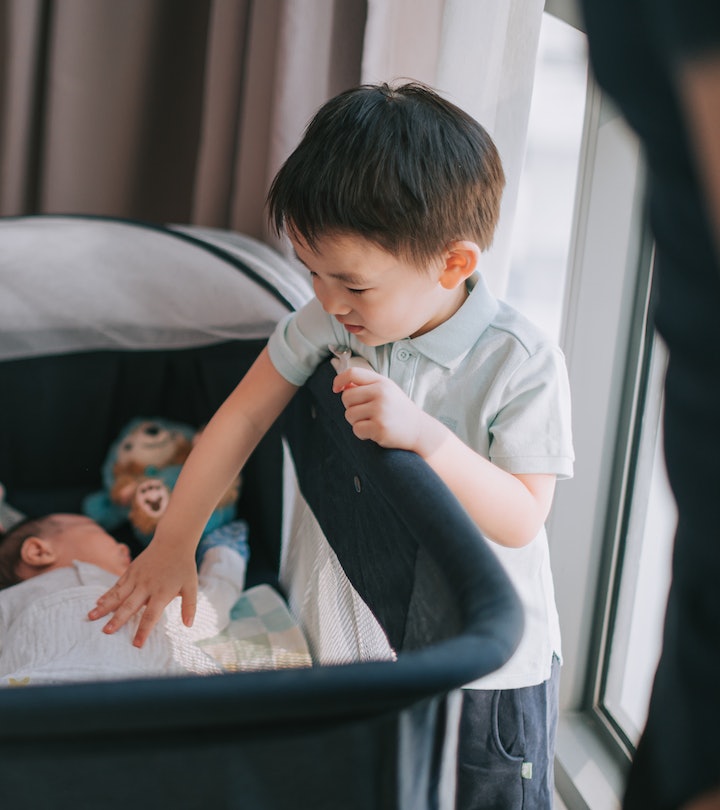 When Will My Toddler Show an Interest in Their Baby Sibling?

Their lack of interest is totally normal.

When my son made his arrival five weeks premature, necessitating a week-long NICU stay during a pandemic, one of the hardest parts was patiently waiting to bring him home to introduce him to his 19-month-old sister. When we were discharged and it was time for their big introduction, I could hardly wait. Grandma cued up the video camera and captured it all — and thank God she did, because after that initial meeting, my toddler spent weeks pretending her baby brother didn’t exist. I asked all of my fellow two-under-two parents: when will my toddler show an interest in their baby sibling? And how do I survive in the meantime?!

It wasn’t my daughter’s apathy that bothered me — newborns are pretty boring, after all. The difficult part was splitting my time between the two, and helping her understand that sometimes mama had to nurse or change a diaper or hold a sleeping baby (all unacceptable, obviously). Realistically, I knew her lack of interest was a phase and I couldn’t force her to care... but oh lordy, how long would I be waiting for our family to become a cohesive unit again?

That said, my close friend just welcomed her second baby this month, and her toddler is glued to her baby’s side. He can’t get enough! All families handle the transition differently, and, as you may have noticed, toddlers are pretty unpredictable. Here’s how the experts suggest handling this wild adjustment period, and a little insight from seasoned fellow moms.

Preparing Your Toddler For Their Baby Sibling

Throughout the 35 weeks of my pregnancy, I tried preparing my 1-year-old for her sibling that had taken up residence in my uterus. For a while, she seemed to get it. She would point to my swelling belly, say “baby,” and give it a big kiss. Then she announced there was a baby in her belly button, and dada had a baby in his belly, too. So close!

Lara Baldwin, California mom of three children strategically spaced 3.5 years apart, had a different experience. “At 3, they were definitely old enough to understand generally the idea of what was happening. We read quite a few books on being a big brother, watched some Daniel Tiger, and just talked about it a lot,” Baldwin says. Additionally, by the age of 3, her sons (and big-siblings-to-be) were surrounded by friends who had already welcomed baby siblings. “That helped to have a visual,” Baldwin noted.

And, according to the parenting gurus behind the wildly popular Big Little Feelings online toddler course and Instagram account, preparing toddlers as much as possible can make a big difference. Deena Margolin, licensed marriage and family therapist (LMFT) and new mother, and Kristin Gallant, professional parent coach and toddler parent times two, founded Big Little Feelings (BLF) to help parents navigate challenges just like this one.

“Books can be a great tool, and as you are reading them, make connections between what they are hearing and seeing in the book and what that means for your family specifically,” the founders of BLF tell Romper in an interview. “For example, if the book shows a mama with a baby in her belly, you can say, ‘Look, she has a baby in her belly just like your mama does.’” And don’t skimp on the details, either. Margolin and Gallant encourage parents to go in-depth, explaining what the baby’s cries will sound like, what the baby will eat, where and how the baby will sleep, and so on. Additionally, getting them involved in the baby prep — organizing diapers, picking paint colors, or creating artwork for the nursery — is a way to help them feel involved.

Naturally, the age of your toddler will have a huge impact on how well you can prepare them for this massive upheaval that is about to occur. Morgan Catron, Wisconsin mom of two daughters 13 months apart, says the idea of preparing her older child was laughable. After all, she had only officially been a toddler for one month before her sister was born. Even if you don’t think they’re understanding a thing, continue talking all about the new baby’s impending arrival. The heads up may or may not help at that young age, but it certainly can’t hurt.

Once your new baby has arrived, it’s time for the moment you’ve been dreaming about your entire pregnancy: introducing the new siblings. Nothing warms the heart like seeing your littlest loves together for the first time (throw in some postpartum hormones, and you should probably have tissues on hand). To make sure the introduction goes smoothly — or as smoothly as anything with a newborn and a toddler can go — Margolin and Gallant have a few pointers.

First, location is key. “When the day finally arrives, introduce the toddler to the baby in a neutral place, like a bassinet or car seat for the first time, rather than in your arms, which can feel threatening to your toddler,” instruct Margolin and Gallant. This was easy for my family: we got home from the NICU, plopped baby George’s car seat on the ground, and let my daughter love on her new brother while we loved on her.

Second, consider facilitating a gift exchange between the pair. “Your toddler will love feeling important picking out a new gift for the baby and the gift itself becomes a unique point of connection between the two,” explain the BLF founders. Give your toddler a gift from their new sibling, and it’ll help them get on their good side right off the bat.

As Baldwin prepared to bring her second child home, she got an interesting piece of wisdom from someone who had seen this adjustment countless times. “My son’s preschool teacher had told me that when boys are 3.5, they are deciding if they want to grow up or be a baby,” said Baldwin. This initial introduction might be a glimpse into which way they’re leaning!

What Happens When Your Toddler Is Totally Uninterested?

Your toddler may have a range of emotions when meeting their baby brother or sister for the very first time, from fascination to joy to sadness and even fear. Regardless of how the meeting goes, don’t be alarmed if the novelty quickly wears off.

“It’s totally normal if a toddler doesn’t immediately show a ton of interest in their new sibling or if their interest waxes and wanes. Foster their interest when they show it and don’t make a big deal about it if they don’t,” say Margolin and Gallant. Just like everything should be in those early days, keep the interactions low pressure. They insist on giving baby a big hug and kiss every morning? Amazing, and good morning! They run past baby like they’re a potted plant? Amazing, and good morning!

I remember sitting at one of my baby’s first doctor’s appointments, completely exhausted and overwhelmed by managing the two littles at once. My pediatrician’s advice, when it came to their interactions, was to go overboard with the encouragement. If big sister so much as sat on the floor next to her baby brother, I praised her. In short, I tried to fill our home with good vibes and show that our family was even better with the new addition. (And let’s be real, this is way easier said than done sometimes. But this was the goal!)

The most important thing for parents to remember is that every single child is a unique individual — and that means they’ll show interest in their sibling in their own time. Baldwin’s own family is a testament to this truth. Though both of her sons became big brothers at the same age, with the same parents walking them through the transition, they responded in vastly different ways. “If what my first son’s preschool teacher said was true, my second born definitely decided he wanted to remain a baby,” Baldwin reflects. “My first born very much decided to grow up.” She says the hardest parts of the transition lasted for about six months, with interest growing every time baby hit a new milestone.

Catron, on the other hand, says the transition was pretty seamless. Her 13-month-old daughter was, and continues to be, absolutely smitten with her sister. “She was so excited from the day she came home,” Catron says. “She would share her pacifiers and bring her stuffed animals. She was always trying to pet her like a dog.”

My own son is only 5 months old, and my daughter just turned 2. While she’s loving and gentle with her brother, I’d estimate she shows genuine interest in him for maybe 30 seconds a day on average. And that’s fine by me! I know she will get there on her own time, and they’ll be playmates soon enough.

So, the bottom line? Preparing your child up for this adjustment as best you can, having a positive introduction, and encouraging the relationship is incredibly important and beneficial to the entire family. That said, you simply can’t force your toddler to be interested. They’ll get there on their own timeline, just like everything else in toddlerhood.