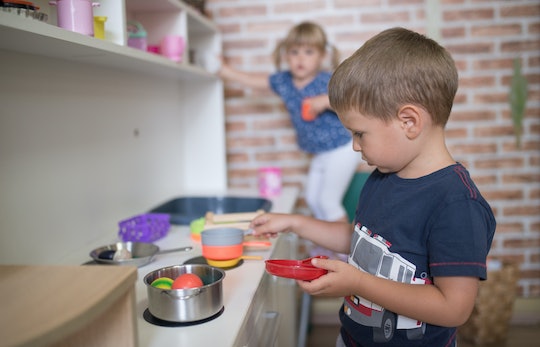 "Toys For Boys" Is Not A Thing

Before I became a parent, I had no idea that the choice to allow boys to play with things like pretend kitchen utensils and toy mops was controversial. The entire philosophy that certain toys are meant for little girls and other toys meant for boys is not OK. Honestly, the fact that someone can even attempt to assign gender to something as commonplace as a set of pots and pans is mind-boggling.

Pressuring parents (and thereby their kids) to conform to societal pressures and assign gender to toys is a slippery slope that can actually perpetuate archaic stereotypes. I've seen this play out over and over in my own home, and I'm here to say that letting kids decide what they want to play with instead of limiting their options to toys traditionally meant for one gender or the other is the way to go.

"Exposing children to a wide and diverse range of toys, which are typically associated with one gender or another, is important so that children have the opportunity to select toys that are more appealing to their own interests," Dr. Drew A. Pate, M.D., chief of psychiatry at LifeBridge Health, tells Romper. "Offering children a broad representation of experiences and toys can avoid inadvertently reinforcing typical gender stereotypes or roles."

Back in 2015, Target announced the removal of gendered signage labeling toys for either boys or girls in their toy departments nationwide, citing the limiting nature of such labels. In the five years since that move, I've roamed those same aisles with my two boys numerous times. While it's true that they do head toward the shelves filled with Hot Wheels and Transformers most often, they're also not shy about exploring the areas where the Shopkins and Barbies live.

Even though not specifically meant to be gender neutral, toys from movies and shows like Harry Potter, Star Wars, and Toy Story have universal appeal thanks to diverse casts of characters. Allowed to freely choose which toys they play with, my own kids don't usually even gravitate toward characters of one gender over another. They genuinely think that Rey from Star Wars is a bad*ss and want her action figure to play with. When asked to name their favorite superheroes, my boys will without hesitation place Captain Marvel at the top of their lists. By not forcing them to pick the "boy" characters, they are free to make their own judgement calls about what they like and what they don't.

My 6-year-old's biggest goal in life at the moment is to become a dad one day. Although this dream likely stems from adoration of his own dad and the shining example of fatherhood he witnesses daily, having dolls to care for, a kid-sized vacuum and mop, and some pretend kitchen utensils to play with can also help him visualize the type of future he dreams of. (And honestly, who doesn't want to support a child's dream of growing up to be a loving parent?)

"Allowing children access to many different kinds of toys and supporting their choices will broaden a child’s experience and view of their world and its possibilities," Pate explains. In the same way girls are encouraged to participate in STEM education and envision themselves in the role of scientist, doctor, or engineer as an adult, shouldn't boys also be allowed (if not outright encouraged) to explore futures where being a chef, a teacher, or a fashion designer is a socially acceptable option?

Kids learn through play. They dream big and explore the world around them, modeling what they see, so it's important to be aware of how gendering toys impacts their development."One important thing to consider when thinking about toys for young children is how they may foster creativity and social, emotional and cognitive development," Pate tells Romper.

If my boys are never presented with the opportunity to explore all of the different ways a person can express creativity, care for others, or expand their mind, how can I ever expect them to grow? They have a future filled with choices, and I hope they choose the ability to nurture others, listen with empathy, and express themselves in healthy ways in lieu of overt displays of toxic masculinity. Letting them choose to play with whichever toys they want, instead of insisting they have "boy toys" will only help to further this notion.

More Like This
20 Of The Best Christmas Movies For Kids
20 Stocking Stuffers For Kids Under $20
101 Advent Calendar Activities, From Books To Read To Cookies To Bake
Festive Mommy & Me Holiday Nail Ideas To Try