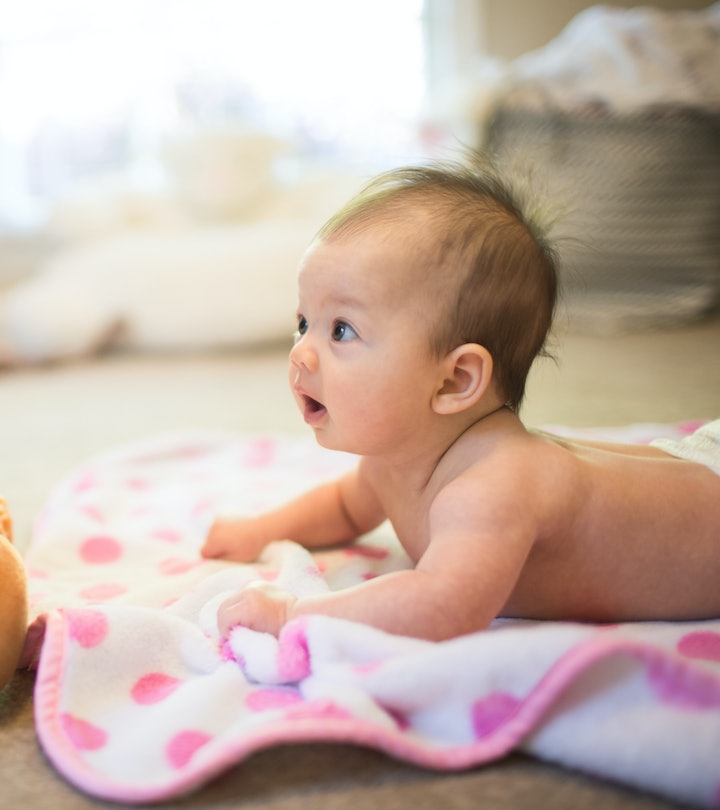 When Can Babies Hold Their Head Up? Experts Explain

When my son was born, he was one of the most alert newborns I had ever seen, and the nurses said so, too. Looking back, I think it was a sign of the horrific sleepless months to come, because he stayed so alert and never wanted to miss anything ever. He was so curious, it seemed like he was eager to play, interact and even hold his head up from day one. We’d try to snuggle him and he’d be trying to scan the place. Back then, I was definitely wondering when babies can hold their head up. Newborns holding their heads up on their own is the big first milestone most new parents watch for, and it’s an exciting step — the first of so many.

When can babies hold their head up?

Some babies are just born with strong necks and it doesn’t necessarily mean anything good or bad, explains Dr. Gina Posner, a pediatrician at MemorialCare Orange Coast Medical Center in Fountain Valley, California.

“Children who are able to lift their heads up (with their chin clearing the surface they are on) earlier than one month of age would be considered precocious in this regard. However, that said, I have seen very young children, when they are crying intensely, lift their heads and even roll over at one or two weeks of age,” says Dr. Robert Hamilton, a pediatrician at Providence Saint John’s Health Center in Santa Monica, California.

There are not really any specific “abnormalities,” including any oral issues, Hamilton adds, that would cause a child to lift their head earlier than normal children. “The only possible exception to this is a baby with gastroesophageal reflux disease [GERD] who is experiencing chest pain as a result of regurgitation into the lower esophagus. Known as 'heartburn' in adults, infants who experience [GERD] arch their backs in pain,” he says.

When do most newborns hold their head up?

Generally speaking, most babies can hold their heads up between one and three months of age. And until then, isn’t it stressful waiting for this to happen while watching your newborn baby’s head move around like a bobble doll’s? “Most babies, by one month, are holding their head up briefly and they are definitely holding their heads up briefly by two months. I would consider it ‘early’ if they are holding it up before one month,” Posner tells Romper.

Baby still not lifting their head? Here’s when to call the doctor

If your baby hasn’t quite mastered lifting up their head after a few months, is it time to stress out? “If, by two months, they aren’t holding their head up at all, I would talk to the pediatrician," says Dr. Posner. "We also look at how well they are holding it by four to six months."

So, though you should try not to stress out — hard to do for new parents — this is a milestone to watch for. “Children who are not lifting their heads well by three months of age would be a red flag to me," adds Dr. Hamilton.

If your baby can lift their head early, don't worry — it's usually not a sign of something serious. If it feels like they’re taking forever to master this skill, it’s always a good idea to check in with your pediatrician for peace of mind.

More Like This
There’s A Reason Your Baby Always Falls Asleep While Breastfeeding
Baby-Led Weaning: A Comprehensive Guide To Introducing Solids
Parent's Guide To A Baby's Dry Cough: Why They Happen & How To Treat
Can You Breastfeed After A Breast Lift? Experts Explain

This article was originally published on Sep. 7, 2019