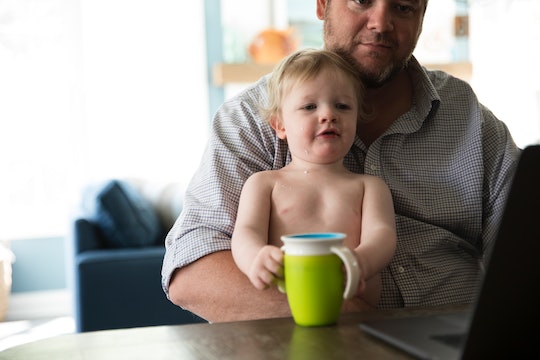 How To Wean Your Baby Off Formula & Transition To Whole Milk

Help them make big kid sips with these expert tips.

You know your little one is getting older when it's time to start thinking about making the transition from formula to whole milk. In what probably feels like just minutes, your teeny tiny child has gone from sleepy newborn to rambunctious toddler who is ready to ditch the bottle and move on to the big kid stuff... well, almost ready, anyway. There are upsides to this (whole milk is considerably cheaper than formula!) and downsides: namely, learning how to wean your baby off formula. For some babies, this is easy and fast, but, of course, every child is different, and some will require a little more attention in this department.

When To Wean Your Baby Off Formula

How do you know if your baby is ready to make the switch? It's generally about their age: according to the American Academy of Pediatrics, once a baby hits their first birthday, it's usually time to wean them off formula. However, you should always confirm with your pediatrician before switching. Dr. Christina Valentine, neonatologist and medical director of Reckitt Benckiser/Mead Johnson Nutrition tells Romper, "Talk to your health care provider to ensure your baby is growing and thriving. Most babies can transition off formula to plain whole milk at one year of age; however make sure they’re eating complementary foods that are rich in iron and zinc."

And unless your pediatrician has recommended otherwise, you should be going from formula to whole milk. Dr. Florencia Segura MD, FAAP, of Einstein Pediatrics, tells Romper, "The AAP recommends that children between 12 and 24 months drink whole unflavored cow's milk — rather than skim milk, 1% milk or 2% milk — unless they have a dairy allergy."

How To Wean Your Baby Off Formula

There are two ways to wean them off formula. You can choose to go cold turkey and do it all in one shot, or you can opt for a more gradual transition. Dr. Segura tells Romper that going cold turkey might be the best bet. "In my clinical practice, I have found switching cold turkey is easier for parents, and that most children like the taste of whole milk and put up little, if any, resistance." Going this route is simple: it means that one day you're giving them formula, and then the next day, you're giving them milk.

If you don't think your child likes whole milk or you're worried about making an abrupt switch, you can take things slow. "You can mix equal parts whole milk and breast milk or prepared formula," Dr. Segura recommends. "Then, start increasing the ratio of whole milk and decreasing the amount of breast milk/formula until you are at 100% whole milk." This should only take a few days.

Dr. Segura also says that you can get your child used to the taste of whole milk by pouring it into their cereal or oatmeal instead of water, or even first offering a small cup of milk as a snack. Dr. Valentine adds that you should also switch to cups around this time. "Start to replace bottles with cups to introduce the new milk ,and save a bottle for the last night time feeding. Make the milk warm and couple with a nice story and rock."

What To Do If Your Child Refuses Milk

There's always the concern that your child might not like whole milk. Sure, it's good for them, but they won't care about the details if they don't like the taste. If your little one refuses whole milk, don't stress. "It's OK," Dr. Segura says.. "We recommend whole milk because it's a great source of calcium, vitamin D, protein, and fat in one convenient and nutritious drink. If, however, your child won't take it, there are many other foods that contain these vitamins and nutritional building blocks. Foods like cheese and yogurt are a good source of fat and are rich in calcium to help your child meet their daily calcium requirement of 700 mg a day. Oily fish and eggs are a good source of vitamin D as well."

Introducing A Cup & Replacing The Bottle

Even if your tot loves the taste of whole milk, though, you may have one other roadblock to get through: ditching the bottle and switching to a cup. Dr. Segura recommends weaning off the bottle between 12 and 15 months of age. Doing it at the same time you switch to whole milk is a natural transition. "Toddlers should be transitioned entirely from the bottle to the cup by 15 to 18 months," she adds. "Two years is my hard stop recommendation due to dental complications such as cavities."

Introducing cups sounds simple enough, but some kids are really attached to their bottle, and just don't want to give it up. It's not so much the bottle itself, it's the fact that they associate the bottle with milk. As Dr. Segura notes, a bottle of milk is just comforting for them. "Milk from a sippy cup doesn't seem right to them," she says.

If you're having trouble, she recommends letting babies practice with open-faced or sippy cups filled with water and/or formula/expressed breast milk between 6 to 12 months of age. "This cues babies to associate the cup not just with water, but also with milk," she explains. "I find it much easier once we swap the formula with whole milk for them to continue drinking whole milk from a cup."

Dr. Valentine recommends playing around with the temperature of the milk as well. "Make it fun, warm the milk," she says. "We change from a cozy warm milk in a bottle to cold milk in a cup and wonder why they throw it on the ground!"

But maybe you're like me, and you didn't start this weaning process before 12 months, and now you have a toddler who is still refusing to drink milk out of anything but their trusty bottle (gulp). If you're in this situation also, Dr. Segura recommends stopping the bottle cold turkey and switching to a cup. "Older babies and toddlers will usually go through a milk strike for two to three weeks, but as soon as they forget about the bottle, your baby will start accepting milk from a cup.”