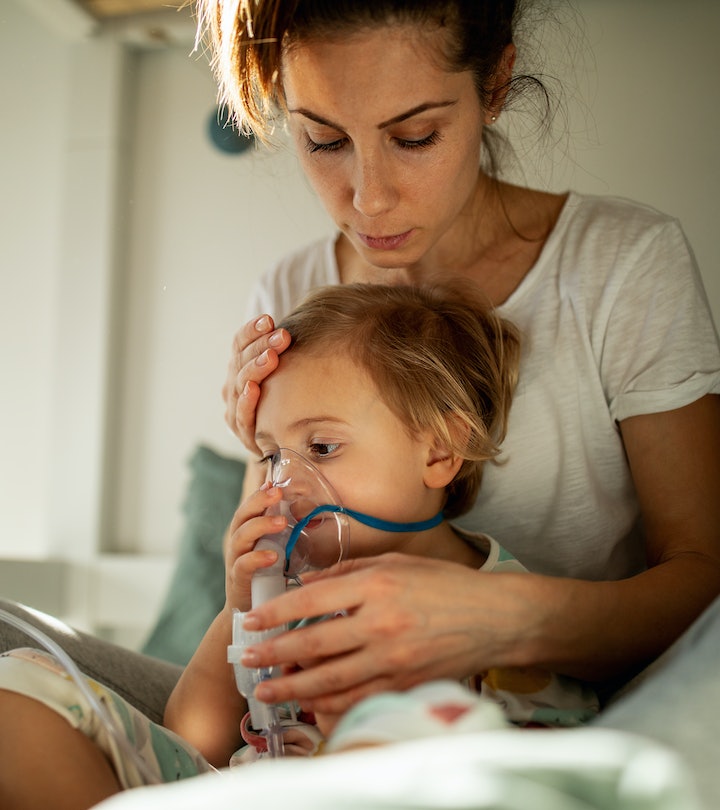 When Does Childhood Asthma Start?

Here’s what a diagnosis of pediatric asthma means for your child.

Is it a cold? Is it a virus? Is it pediatric asthma? The last few years have put many parents on edge about any kid’s stuffy nose or cough, for good reason. Children with their tiny airways are more susceptible to most respiratory illnesses. What is the difference, though, between a respiratory virus and a diagnosis of childhood asthma? Noticing that your child seems to have some symptoms of asthma can lead you to a doctor, wondering when childhood asthma actually starts.

When are kids usually diagnosed with pediatric asthma?

Asthma is a medical diagnosis that can be exacerbated by viruses, but can also be triggered by heat, exercise, pollution, and more. The airways constrict in the lungs, making it difficult to draw in enough air. But what are the criteria to diagnose a child with pediatric asthma? It’s a bit more complicated than you might think.

Dr. Arunima Agarwal is a pediatrician in New York who has walked families through the onset of an asthma diagnosis. “Asthma in an infant/toddler can be hard to diagnose,” she says. “Your doctor will look at the symptoms, their frequency, and may need to do tests to rule out other diagnoses, so often it isn’t diagnosed until your child is a bit older, around age 5 or more.”

My 10-year-old spent most of his first winter in and out of the pediatrician’s office for a seemingly endless course of antibiotics and steroid treatments. Our doctor warned us that while most 12-month-olds aren’t diagnosed with pediatric asthma, what we were experiencing often foreshadows such a diagnosis. Eventually, by the time he was 4 years old, he was diagnosed with asthma and we began a year-round course of treatment that involves both preventative and emergency medications. I was surprised by how long it took to get the official diagnosis, but that is because asthma is complicated.

For most kids, like mine, the pediatrician is the first one to note concerns with how a child’s lungs react to common triggers. Agarwal notes that many other diagnoses can look similar to asthma in young kids, so it might take some time to figure out what is going on. GERD/reflux, RSV, or other congenital abnormalities are often other conditions that are considered.

Some of the common symptoms parents see are a frequent cough that worsens with viral illness or cold temperatures, a whistling or wheezing sound when they breathe out, shortness of breath, chest congestion and tightness, taking a long time to get over viral illnesses that are more mild for other family members, and coughing or becoming short of breath while playing and running.

What is the treatment for pediatric asthma?

Once the pediatrician and parents have seen a pattern of asthmatic reactions to common triggers like viruses and exercise, your child will often be referred to a specialist. Dr. Thomas Horsman is a pediatric pulmonologist at Ochsner Medical Complex in Baton Rouge, Louisiana, and he tells Romper, “Parents commonly report their child ‘just can’t stop coughing.’” Very often, he says, some signs of asthma are present from infancy through the preschool years that parents and the pediatrician are monitoring, even before they are given a diagnosis of childhood asthma and end up in his office.

Thankfully, there is a proven course of treatment that both Horsman and Agarwal have used with great success in their young patients. Our family has had a lot of luck with the treatments our doctors prescribed, though it took some trial and error.

Most kids with asthma carry a short-acting inhaled medication such as an albuterol inhaler. For infants and toddlers, it is difficult to use an inhaler, and they might use a nebulizer machine instead. There are tons of great cartoons and videos on YouTube that can ease your child’s anxiety about taking these medications. We also practiced putting the mask on stuffed animals or letting our son “give us” his medication. Eventually he went from tantrums to the calm preteen who sits with his nebulizer on while playing Roblox with his free hand.

Kids who are a little older can use a spacer on a typical inhaler, Agarwal says. This allows them to take a few natural breaths to take the medicine rather than trying to inhale the medicine in one deep breath. Short-acting medication — often called a rescue inhaler — should always be in your bag, because you never know when a trigger might occur. It is also important to make sure your child’s day care or school has a set of their short-acting medication, too. During illness, your child might also take an oral steroid in a liquid or pill form. This medication can often disrupt sleep, cause more tantrums, and decrease their appetite.

Many other kids take a daily inhaled medication, as well, which is a steroid such as Qvar (beclomethasone). For kids age 6 and above, there are also options like Symbicort (budesonide/formoterol fumarate dihydrate) that combine a steroid with a “bronchodilator.” Basically, that’s a medication that opens up the tiny airways in your child’s lungs. These types of daily medicines keep the lungs in good shape in case they are exposed to a trigger.

Receiving a diagnosis of pediatric asthma can be scary and stressful, but most kids who receive proper treatment and regularly visit with their pediatrician or pulmonologist are able to control their asthma well. Even though the arrival of new respiratory viruses on the scene added extra anxiety to our asthma journey, early studies even show that kids with asthma are not at a higher risk of severe disease. Our son weathered the virus in the fall of 2020 with his regular course of medications.

With the options and knowledge available to parents now, most children like ours living with childhood asthma have active, healthy lives.

More Like This
Crate & Kids’s New Back-To-School Essentials Are Just Too Cute
18 Instagram Captions For Pictures Of Your Kid's First Swim
Social Media’s Effect On Kids’ Wellbeing Is A Public Health Emergency
Abbot's Formula-Producing Plant Can Reopen In As Early As 2 Weeks — Now What?