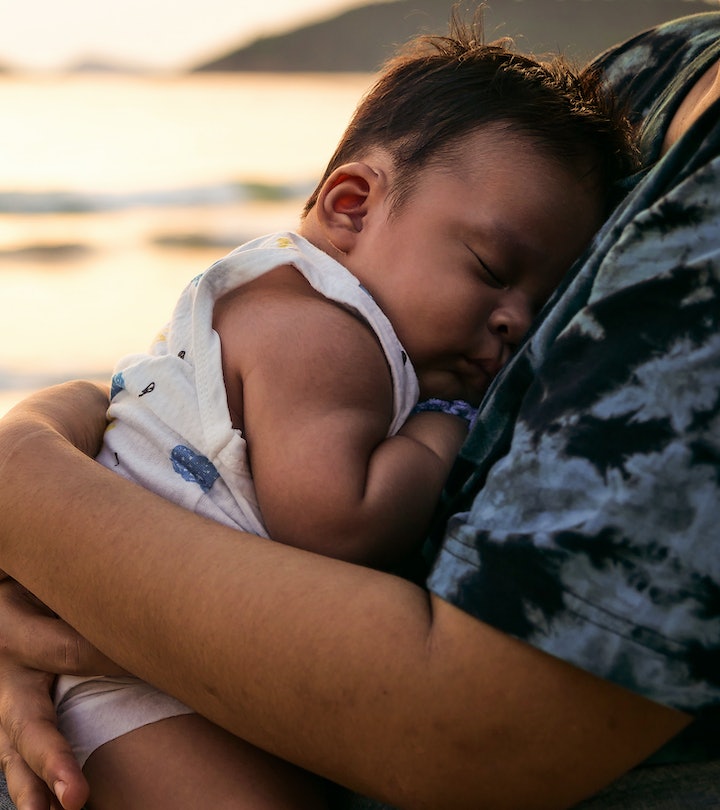 And how to keep them safe when they do it.

When my daughter was a baby, she happily spent the majority of her waking hours buried between and beside my breasts. I'm confident that if she could have completely buried herself beneath me, she would have, and she’s not the only baby who does it. Babies like to bury their faces, whether it’s to nuzzle into your armpit or even hold their own fists up against their cheeks. But cute as the behavior is, a fear of making sure that baby can breathe can make parents a little concerned about whether it’s safe for babies to burrow their heads into our chests and why they’re doing it in the first place.

“Parents or primary caregivers signal to a baby connection and security, or basically secure attachment,” pediatrician Tiffany Kimbrough, M.D, at Children’s Hospital of Richmond at Virginia Commonwealth University (VCU), tells Romper. “Babies love to burrow close to feel the warmth of their parent or caregiver and hear their heartbeat. This means that you are a safe place for them.”

A newborn might also exhibit this behavior when they’re hungry (the terminology is known as “rooting,” Kimbrough adds), as they look to latch on to a breast to feed. “Enjoy those baby snuggles while they last - once they are mobile you will notice your baby cuddle less often and want to get down and explore the expanding world around them,” she says.

The answer behind this cute behavior might go beyond snuggles and snacks, though. A recent article in Frontiers in Psychology found that these types of sensory-seeking behaviors might be a comfort mechanism, a way to self-soothe when babies are feeling out of sorts, hungry, tired, or just overwhelmed. It is the literal definition of "pulling a blanket over one's head" to developing minds that are easily frustrated.

Pediatric sleep expert and chiropractic doctor Dr. Sarah Mitchell of Helping Babies Sleep tells Romper, "I have observed the phenomena of babies wanting to have their cheek up against something repeatedly. This may look like putting a little blankie on their face, or rolling onto their stomach, and rubbing their cheek into the mattress." She says that while it is sensory seeking, it has more to do with their age than anything.

"If we think back to the newborn period, a child's cheek is naturally pressed up against another skin when breastfeeding. In this manner, babies develop a positive association with having something pressed up against their cheeks." Whether it's a mother/parent's breasts, their warm bed, or even laying in the crook of an arm, they are comforted by this feeling.

How long do babies like to bury and rub their faces?

Mitchell says that this comfort mechanism only evolves and continues as the child ages. "In the early weeks of life, children develop a positive association with pressure or tactile stimuli into the skin of their cheek." And that because of this comfort that's so concrete in their minds, "this behavior lasts throughout childhood."

Is it safe for babies to bury their face?

“It is safe for babies to nuzzle into a parent or caregivers' chest,” says Kimbrough, “but if they fall asleep, they should have their position changed to have a clear view of their face and prevent accidental suffocation. This is especially true for newborns through 4 months of age.”

“Also,” she adds, “it is critically important to take steps and remain vigilant about not falling asleep while your infant is on your chest, which is really hard in those early sleep-deprived days. Accidental co-sleeping can increase your baby's risk of accidental suffocation or falls which can also lead to serious injury. Babies younger than 12-months-old should be put to sleep on their backs on a flat, firm surface in their own crib with no blankets or soft toys. You can keep the room cool enough so it’s comfortable for them, but not so cool they wake up throughout the night.

If your baby is awake during the day and burying or rubbing their face on things like a tummy time mat or a bouncer, just stay aware and look for any sleepy cues. If they start to fall asleep with their face pressed into something soft, you can adjust them into a safe sleeping position.

There’s nothing wrong with your baby loving the feel of your chest against their face or wanting to sleep nuzzled into your armpit. But it is important to keep them safe and to instill safe sleeping habits from the very beginning.

More Like This
These Darling Baby Boy Names All Start With The Letter "D"
Abbot's Formula-Producing Plant Can Reopen In As Early As 2 Weeks — Now What?
Can You Help Your Baby’s Hair Grow?
24 Beautiful Baby Names With The Same Vibe As Mila