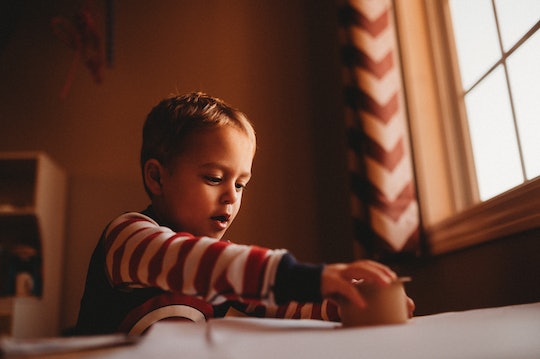 Don't Panic: Your Child's Imaginary Friend Is Just Their Creativity At Work

Or maybe they're really just talking to ghosts, but experts say these imaginary friends and conversations are beneficial.

As an only child, I played by myself a lot when I was younger — though I wasn’t really alone, at least in my mind. My imaginary friend "Leo" was always with me. Why his name was Leo, I’m not sure, but he was a really awesome companion for me. I often wonder if my only child will follow my footsteps and create his own invisible buddy, too, but why do children create imaginary friends? Is it something us lonely children tend to do, or is it just a common game for kids to play in general? I also wonder if having an imaginary friend is some sort of indicator of what kind of adults kids will turn out to be. Most of my friends who are in creative fields for their careers had imaginary friends.

And I guess that makes sense, because as it turns out, having an imaginary friend is just an extension of your child’s awesome imagination, according to licensed family therapist Katie Lear. “More than half of all children have an imaginary friend at some point. Little kids have such rich inner fantasy lives,” Lear says.

Beth Tyson, psychotherapist, parenting coach, and childhood trauma expert tells Romper, “Research from a study that involved 152 children under the age of 7 found that 65% had an imaginary friend, making this a normative experience for most children.” So it’s a pretty normal activity, that actually has a lot of positive benefits.

Lear says benefits of having an imaginary friend include relief from boredom, a safe place to work through feelings, and a way to practice social skills that can later be used with real-life friends. Tyson says that imaginary friends also provide coping strategies for life stressors, help with problem solving and management of emotion, help children overcome loneliness, and allow children to explore behavior and roles. She says it also produces confident personalities in children.

So kids aren’t actually loners when they create imaginary friends. Lear says, “Modern research shows the opposite is true. Kids with imaginary friends tend to be bright, creative, verbal, and socially intelligent.” Well as someone who had an imaginary friend, I sure like that answer.

The way these traits occur are sort of like a chicken or the egg argument. “Maybe kids with these traits are more likely to dream up a friend in the first place, or maybe the imaginary friend has helped kids to hone these skills,” Lear says. “I wouldn't be surprised if there's a correlation between imaginary friends and creative professions later in life. If you consider that highly imaginative kids may be predisposed to creating an imaginary friend, and that this type of play boosts a child's creativity further, it seems to make sense.”

There’s apparently research suggesting that adults who had an imaginary friend “score higher for creativity and achievement,” Tyson says. “This practice in early life of creating imaginary people — characters — outside of reality could be why so many authors and film creators report having imaginary friends as children."