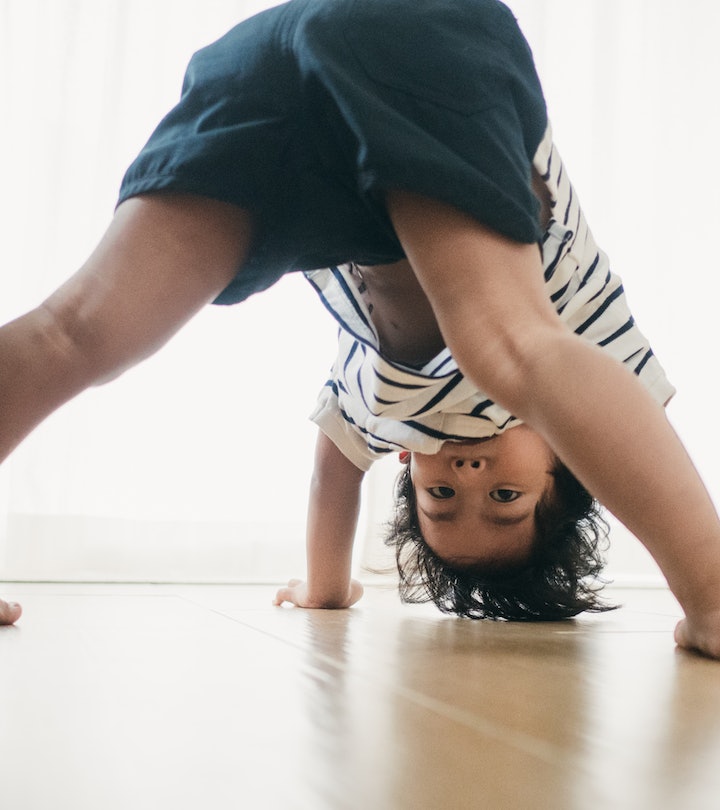 Why Do Toddlers Stand On Their Heads?

They’re actually doing a ton of brain work in this position.

The world of toddlerhood is a fascinating one. People frequently tell me that they could watch my toddler explore the world all day long, so insatiable is his curiosity — not to mention that contagious joy we all want to soak up. But little kids do some pretty baffling things, and half the time I have no idea why. For instance, what does it mean when a toddler stands on their head? It seems they would rather see the sights upside down from between their legs than they would right side up like a normal human being. What gives?

What does it mean when babies and toddlers stand on their heads?

As Dr. Jill Creighton, an assistant professor of Clinical Pediatrics and Medical Director of Ambulatory Primary Care Pediatrics at Stony Brook Medicine, says, the reasons for this befuddling behavior are actually highly neurologically involved. “Brain development and learning occur in nonverbal and verbal children during their interaction with their environment," Creighton tells Romper. "Being upside down is a way a child learns about their body and the sensations that occur in that position. It builds body awareness, which includes sensory and muscle memory, and will help inform a child's movement in the future." That's packing a heavy punch for something that looks like silly play.

Playing upside down has been shown to stimulate the vestibular system, which is part of our body's sensory system that helps establish where the body is in relation to our environment. According to Creighton, children's brains and vestibular systems are going through a "training process" that includes interacting with their environment and building sensory and motor connections in the brain. In fact, developing such vestibular information early in life has been linked to higher cognitive performance as a child grows, as outlined in a study published in Frontiers in Integrative Neuroscience.

But it’s not all about stimulation and strengthening. Creighton encourages parents to be aware that being upside down can actually have a calming effect on children. Although it might look like they are goofing off and getting riled up, it's possible that the opposite might be true. "Some children will seek this position during active play, while others find it calming when they are trying to wind down and rest. Don't forget that the last few weeks or months of gestation, a child is upside down in the birth canal." Some enjoy resuming that position to find a state of peace and comfort.

Is a baby standing on their head a developmental milestone?

In a way, yes, a baby standing on their head shows that they are indeed developing. "The vestibular system has been shown to be imperative for balance, motor movement, and also cognition and orientation," Creighton explains. "The positioning of a child's head and the sensation of being upside down helps develop postural muscles for balance, helps the brain form strong connections that help muscles hold the head upright, and also provides neural feedback about the child's movement in relationship to the world around her."

Licensed psychotherapist Dr. Mayra Mendez affirms the benefits that Creighton lays out. "Among the many sensory experiences that naturally take place in toddlerhood, hanging upside down, rolling on the ground, jumping and running are particularly activating of brain stimulation," Mendez says.

Mendez also points out that being upside down strengthens the child’s capacity to see the world from alternative angles and perspectives, which will only benefit their intelligence down the road. "It helps the toddler to consider other points of visual referencing and apply knowledge to make sense of new information," she points out. "Seeing things upside down reinforces constancy even when the world is seen from a different angle."

With benefits like these, I'm beginning to think maybe we all need to spend a little bit more time upside down.

More Like This
A Parent’s Guide To Stomach Pain In Kids
When Does A Baby Recognize Their Father? A Pediatrician Explains
Doctors Swallowed LEGOS To Prove Everything Is Awesome For Kids Who Do The Same
Cradle Cap Is Normal & So Is Your Desire To Get Rid Of It. Here’s How
What Parents Are Talking About — Delivered Straight To Your Inbox

This article was originally published on Sep. 11, 2018