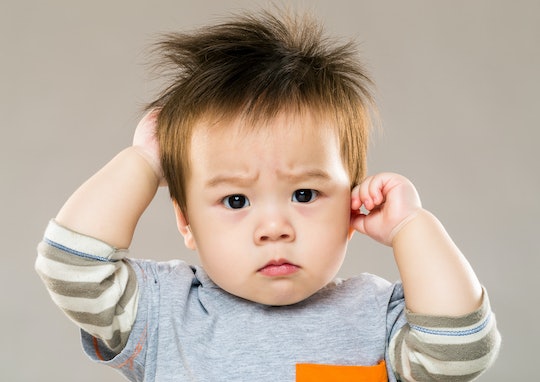 You’re putting your baby down for a nap. Everything is peaceful and your little sweetie looks like they’ll soon be snoozing — and you just might get a break. But then, out of nowhere, your babe suddenly strikes themselves in the head or bangs their head against the crib. And then, does it again. When you get over the shock, you might ask yourself: why is my baby hitting his head?

“Head banging is a common behavior,” pediatrician Dr. Manasa Mantravadi, MD, tells Romper. “It typically appears before 12 months of age and most babies stop by age 2 or 3.” Still, the sight of your little nugget knocking their noggin can be completely frightening.

So what does head banging actually look like? It can be your babe banging their head against anything from a wall to their crib to other objects, SleepFoundation.org reported. They might even lift their head up and bonk it back down onto the mattress. Scary stuff to see, for sure, but there’s likely an explanation for this alarming behavior.

Your Baby Hits Their Head To Self-Soothe

Some babies play with their hair… you know, the few strands they might have. Others take the palm of their hand and give their head a good wallop. What gives? Well, it depends on what they’re doing prior to the punch, licensed child psychologist Dr. Amy Nasamran PhD tells Romper. “Many babies hit their heads as a self-soothing mechanism before or during sleep,” she says. “Even though this can cause concern for new parents, it's totally normal behavior for babies to do this for short periods of time (not lasting longer than about 15 minutes).”

Your Baby Bangs Their Head As Part Of Their Development

Babies go through a whole bunch of developmental milestones. And while headbanging might not seem as exciting as, say, a first tooth erupting through their gums, it’s fairly normal — and important. “Research has suggested that it is a part of a group of repetitive behaviors that we commonly see in childhood (thumb sucking, nail biting, genital play, etc.),” explains Dr. Mantravadi. “It is a mechanism for their developing neurologic system to interact with environmental influences, like a crib.” So by your baby banging their head, they’re actually learning how they fit in with their surroundings.

Your Baby Bangs Their Head Out Of Frustration

You serve up string beans for dinner, but your little love wants pears instead. Cue the tears and (possibly) some head banging. Babies have been known to hit their heads out of frustration, Kids Health reported. Dr. Fran Walfish, PhD, a family and relationship psychotherapist and author of The Self-Aware Parent, agrees. “Baby or toddler head banging is usually a symptom of the child’s anger,” she says. “They may not yet have the language development to verbally express their frustration in words.” Try to figure out what could have potentially upset your child, and then do your best to soothe your baby so that they don’t have to resort to headbanging.

Your Baby Bangs Their Head Because It Gets A Reaction

Your little one crashes their head into the crib, and you gasp. Or you might cradle your little cutie and cover them with kisses. Either way, headbanging is pretty much guaranteed to get a parental response, which is why some babies like doing it. “Your baby knows that head banging gets a big reaction out of Mommy, and that’s why they do it,” explains Dr. Walfish. Although you don’t want to limit your baby’s ways of self-soothing (or in some cases, venting), headbanging for effect isn’t something you want to encourage. “Offer your baby an alternative to headbanging such as squeezing or even biting a toy,” she says.

If Your Baby’s Headbanging Becomes Problematic

Although headbanging is normal, there are times in which it can become a real issue. “Head banging that causes injury is a sign that more professional help may be needed,” says Dr. Nasamran. “For example, if your baby or toddler hits himself on the head when upset or during a tantrum that causes bruising or bleeding, it may be helpful to talk to your pediatrician or a child psychologist to figure out why.”

Since headbanging is often associated as a precursor to sleep, monitor when your baby bonks their head. “If your child is otherwise healthy and only does this at night or at naptime, there is little concern as it is a common way for babies to fall asleep,” says Dr. Mantravadi. But if it’s during the day, it might be cause to call your pediatrician.

And if you have other concerns that coincide with the headbanging, it’s best to speak with a medical professional, Dr. Nasamran advises. “Head banging in and of itself is not a symptom of a mental health diagnosis or developmental concern, but if it occurs in conjunction with other behaviors or difficulties, it could be a sign of something more,” she explains. “For example, children with autism spectrum disorder or ADHD sometimes engage in head banging.” You might want to consult with a child psychologist who specializes in child development and behavior for additional answers.

Although it can be upsetting to see, headbanging in children is quite common. Make sure to monitor your child, though, to ensure that it’s not excessive or could pose a potential danger. Hopefully your little headbanger outgrows this stage sooner rather than later — before you want to bang your own head out of frustration.

More Like This
There's A Good Reason Why Your Baby Is So In Love With CoComelon
Does Pumped Breast Milk Have Antibodies? Experts Weigh In
9 Bedtime Mistakes That Are Keeping Your Baby Awake & How To Fix Them
How To Tell If Your Newborn Is Nursing For Comfort

This article was originally published on April 4, 2017