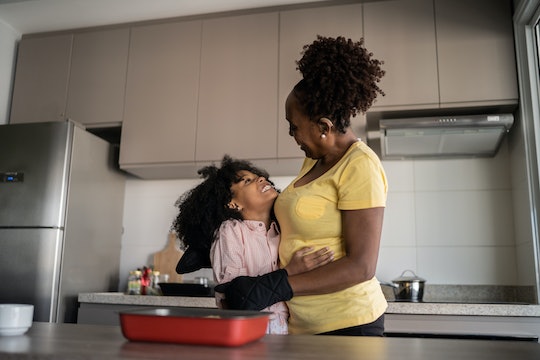 Why Your Big Kid Is Suddenly Talking Like A Baby

“Baby talk when a child is older may not be caused by regression, but maybe an attempt for attention,” experts say.

As a baby's parent, you live every day in expectation of when they will say their first word. You wonder which parent gets to win the battle of being the “most important” that your baby will call out for you first. I won, by the way. When “mama” came out of my 9-month-old’s lips, I could have melted into the floor. After that, it’s on to the next milestone, right? They won’t pronounce every word properly, but who wants to correct a cutie pie that says doey instead of door. It won’t last long, so we tend to let it slide.

But after they’ve grown into a big kid, have learned to enunciate, and say water instead of wallow, what does it mean when they revert to baby talk? “Children will often play around with trying something again that they got attention for at a different stage of life. It's normal. It's part of learning. It's honestly the parent's response that maintains or extinguishes this behavior,” Daniela Owen, child psychologist and children’s book author, tells Romper.

There are many different reasons for regression in a child’s behavior, and as a parent, you’re right to be concerned. Most kids are excited to show how much more they can do as they get older, like pronouncing the big words on billboards while in traffic. This physical, mental and emotional growth allows us to feel like we are doing something right as parents. And knowing that they are meeting these milestones and even passing them is comforting. So when they go backward, it can be jolting.

“Regression can be caused by any major life change, whether it is something that parents are well aware of, like a new baby in the house, or a change that parents may consider less life-changing, but may be a big change for a young child,” says Owen. This can include switching babysitters, going to a new grade in school, or a parent changing jobs and having slightly less or more time at home. Because a child’s brain processes information differently, what can seem small or insignificant to you can be a tremendous shift in their world. Over the past year, we all went through major adjustments, and according to a Yale Child Study, many parents described their children as reverting to baby talk during Covid. But these were extreme circumstances.

Owen says, “Baby talk when a child is older may not be caused by regression, but maybe an attempt for attention.” Her advice is to ignore it. “If parents laugh or find the baby talk cute at first, they reinforce this behavior for the child. Children will repeat behaviors that parents reinforce or give attention to because reinforcement and attention are desirable to children and all humans.” This is more common in homes where a younger sibling is naturally at the baby talk phase, and we fawn over it, laugh, and talk about how adorable they sound.

When you choose the route of not giving your attention to your child when they revert, consistency is key! If you ignore it sometimes, and other times you pay attention, it also reinforces the behavior. “Intermittent reinforcement is the most powerful type. The child does not know when they will get attention for the behavior, but they know it happens sometimes, which can cause them to talk like a baby more and more. So fully ignoring the behavior is key,” Owen says.

Because there can be more serious causes and triggers for this regression, Owen says to watch for other things that may accompany it like bed-wetting, meltdowns, or becoming withdrawn. This can be a result of trauma. “I suggest talking to your pediatrician about whether to consult with a therapist who specializes in these kinds of behaviors.” Also, if baby talk is their only behavioral change, and it continues even after you’ve ignored it, she recommends seeking a consultation with a therapist specializing in trauma-focused cognitive behavior therapy.