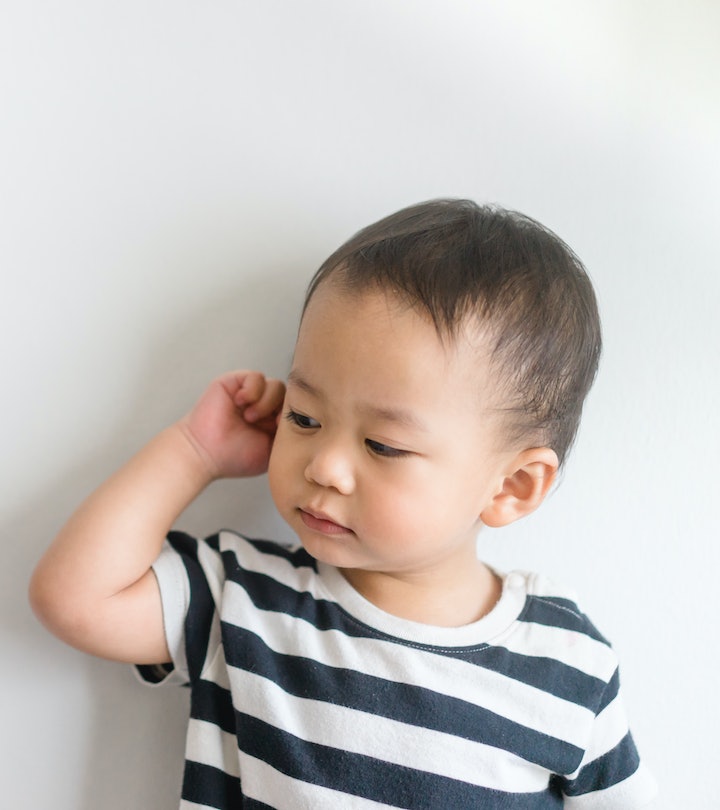 Here's Why Your Toddler Is Obsessed With Ears, According To An Expert

As any parent knows, toddlers can get fixated on some pretty strange things. So if you're asking yourself, "Why is my toddler obsessed with ears?" please know that you're not alone. Visit any parenting forum and you'll find parents asking themselves the same thing, and discussing how their kids are just as fixated on a specific pair of lobes, too. And when you're a new parent navigating the world of a young child, this behavior may seem especially peculiar, bothersome, or even alarming.

For the most part, though, the answer is simple: babies and young children need and will find ways to self-soothe.

“As children explore their bodies, it would make sense that they would find areas of their body that provide comfort," Dr. Natasha Burgert, M.D., a pediatrician and child health advocate at KCKidsDoc in Kansas City, Missouri, tells Romper. Burgert says young children will often touch or fixate on various body parts in order to self-soothe.

“These soothing behaviors can be misinterpreted as pain like, for example, if a child is rubbing her ears,” Burgert continues. This makes sense, as pulling on an ear can be a sign of an ear infection. But ear infections generally come with other symptoms, such as fever, crying or fussing, trouble sleeping, balance issues, and trouble hearing. Five out of every six kids will likely experience one of these painful infections before they turn 3, according to the National Institute of Deafness and Other Communication Disorders. But again, just because they're common doesn't mean a tug on the ears automatically indicates an issue.

Other reasons children might rub or pull on their own ears, according to the Seattle Children’s Hospital website, are a buildup of earwax, or having an irritating soap or shampoo trapped in their ear canal after a shower. But "habit" is also listed as a main cause of rubbing ears on the same site, and if a young child is tugging on their ears sans a fever or crying, they generally do not have an ear infection.

“It does not take long...for astute parents to pick up on these soothing habits and enjoy the unique behaviors they may witness,” Burgert tells Romper.

So, how common is it for toddlers to tug on their (or other people's) ears as a self-soothing technique? “I have many kids in my practice who will pull their ears, play with their hair, or even rub their tummies as they fall to sleep or try to relax,” Burgert says. And because of how positive feedback loops work, they’ll continue to repeat the behavior so long as it feels good.

Seattle-based mom Celeste Noelani says both her children were particularly obsessed with their parents' ears from a young age. “My daughter is 8 and will still climb into our laps to play with our ears when she’s feeling very tired, anxious, or overwhelmed,” she says, who adds that they also loved playing with the multiple piercings in her sister’s (their aunt’s) ear lobes.

“My mom always talked about how I would hold onto an ear when being carried as a young child. It was the only thing that really soothed me. Both my kids were the same."

Julia Tasuil, a mother based in Sioux Falls, South Dakota, says her 3-year-old child frequently rubs her ears as well, especially for comfort or before bed. “They started while still nursing. I haven’t talked to a doctor because it’s not an issue, just an endearment."

All in all, young children have no real need to reduce or stop behaviors like touching their, or your, ears. As long as there are no additional symptoms, odds are their behavior is simply related to self-soothing. If the behavior is causing any unpleasant side effects, though, you should always consult your child’s pediatrician to rule out any other issues.

More Like This
Why Do Toddlers Line Up Toys? Experts Explain This Classic Toddler Behavior
Why Do Toddlers Throw Themselves On The Ground During Tantrums? They Have Their Reasons
Here’s Why Toddlers Sometimes Cry So Hard They Throw Up
Can You Burp A Baby Too Hard? A Pediatrician Shares Tips For Gassy Tummies