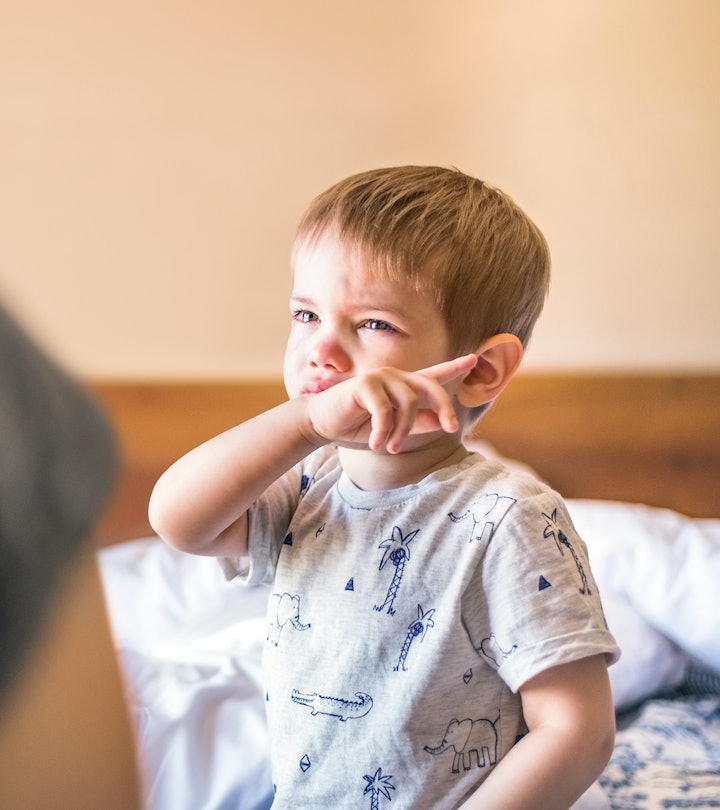 Moms To Toddlers Everywhere: This Aggression Will Not Stand, Man

Toddler aggression is way more common than you might think.

I don’t know about your toddler, but my toddler will go from being a sweet, snuggly angel to a terrorist in two seconds. It’s like something comes over him and he has to start hitting. He doesn’t seem to be a jerk all the time, just randomly. Is he angry that I checked my email while we were watching Daniel Tiger and shows his displeasure by hitting my legs like I’m Bam Margera’s Dad? Is he just trying to explain his very dramatic feelings about very minor inconveniences?

I’m not alone with these questions. Toddlers can be aggressive for a variety of reasons, explains pediatrician Gina Posner. “Sometimes it can be because they are frustrated with not being able to express themselves through language, so they hit or bite or show some other form of aggression,” she tells Romper.

Pediatrician Daniel Ganjian adds that aggression in toddlers is common. And in addition to not being able to communicate verbally, other reasons toddlers are aggressive include if children feel like they’re not getting enough quality attention, such as positive touches and eye contact. Ganjian says this happens frequently with parents who are glued to their phones, working, or have substance abuse problems. So I guess my son really does get mad when I check my phone in front of him. (But dude, Mama has to work sometimes.)

He says that other times, kids can learn aggression from seeing aggressive behavior, “like when there is much strife or yelling in the family, parental discord, or actual abuse.”

The way you discipline your child can also contribute to aggressive behavior. “Kids that are hit are shown to hit more in the future,” Posner says. “You need to demonstrate the same behaviors you want them to display.”

How To Deal With Toddler Aggression

“Yelling and scolding are not good methods of discipline either, but as a mom I know this is very hard to avoid. Try to minimize it as much as possible. If you use a calm voice, frequently a child will calm down faster. Show other methods of expressing yourself and give space for them to calm down,” Posner says.

Ganjian suggests turning negative touches and moments into positive ones. “Instead of telling kids what you don’t want them to do, tell them what you do want them to do. Say, ‘Be gentle,’ and then take your child's hands and pet the person they hit, or have them give hugs, a positive form of touching.”

It’s also important to note that when it comes to hitting or spanking, your child will often become tolerant of that, according to Ganjian. “So the parents have to escalate to higher forms of discipline which can be injurious and abusive. Remember that you teach more by your behavior than what you say — if you hit/spank and yell, your child will also learn to do the same, even though you tell him not to.”

But even if your child has never experienced aggression, just keep calm. “Parents are always overly concerned about it, but kids are wild by default and are tamed through good education — but it could take months to years. Be patient,” Ganjian says. “The remedy is increased positive interactions with mom and/or dad. Give them an overdose of attention with 50 kisses, 13 hugs, and 13 ‘I love yous’ on a daily basis.”

When Should You Worry About Toddler Aggression

Ganjian says every parent gets scared when their toddlers are aggressive, but aggression is usually only problematic and atypical when they repeatedly injure themselves purposefully. Additionally, he says, “If children are not responding to different parenting techniques, not giving good eye contact, and not speaking according to their development, speak to your child's pediatrician. If your child frequently bites their fingers strongly and has other self-injurious behaviors, it can be a sign of Lesch-Nyhan syndrome, a rare disease that is associated with neurological and behavioral abnormalities.”

Dr. Mayra Mendez, a licensed psychotherapist, tells Romper that other red flags include tantrums that go on for an extended length of time — exceeding 20 minutes — the tantrum is “presenting with high intensity” and the child can’t regulate emotions in a timely manner. She adds if there are more than five tantrums a day, and if tantrums occur without an “identifiable trigger” and seem to be random and unprovoked, those could be warning signs.

Additionally if a child continues these tantrums despite a caregiver’s genuine efforts to console them, it’s worth bringing up with your pediatrician. Posner also suggests talking to a doctor if your child isn’t hitting their milestones or if the aggression gets worse.

Ages When Aggression Can Be More Of A Concern

As far as the biting, hitting and throwing, Posner says if they’re still doing these things by 4 years old, it could be a sign that something else is wrong. “Not always,” she says, “but I would definitely talk to your pediatrician to get to the root of the problem.”

“If aggression continues by age 6 or 7, and if all teachers have been complaining about it, it can be an issue,” Ganjian says. “If only some teachers complain about it, then speak to the ones who do not complain about it and find out what kind of education techniques they are using on your child. Different techniques work with different children — even if they are in the same family,” he says.