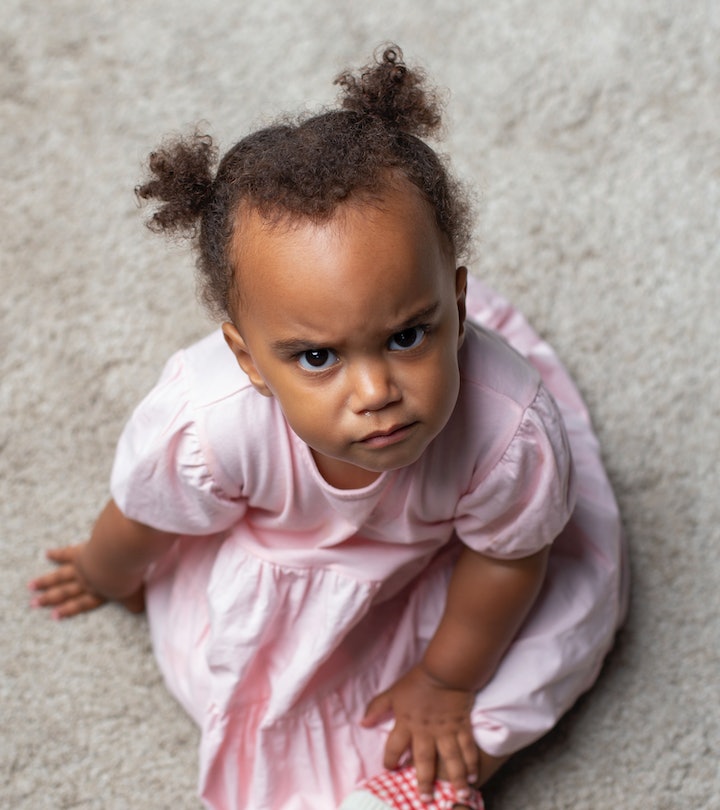 Your Toddler's Not Angry — They Just Have *Big* Emotions

And whether you gave them the wrong toy or an orange that's "too orange," their frustration is kind of valid.

Toddler tantrums can be some of the worst experiences for parents to endure. If the screaming, stomping, flailing, and fit-throwing of your little one feels relentless, you might find yourself wailing into the abyss yourself, "Why is my toddler so angry?"

"If a toddler isn’t able to communicate clearly, it can make him frustrated when he tries to let adults know what he wants or needs," pediatrician Dr. Whitney Casares, M.D., tells Romper. "Likewise, toddlers are still developing their ability to use logic and reason. When they get upset, they often act out of pure emotion, becoming angry or tantruming."

A well-meaning grandmother may label them as "quick-tempered" or "easily agitated," but the fact remains that some toddlers can't help but unleash little fireballs of fury on their parents around the clock. They exercise their wild abandon by throwing toys, hitting siblings, and voicing their frustration at ear-splitting volume. If you've ever dealt with this type of toddler, you know it can feel like there is just no pleasing them. When it comes down to it, though, this anger isn't actually as unjustified as it may seem.

"Developmentally, toddlerhood is all about seeking a degree of independence. As they seek a greater sense of personal control, this sets up a potential power struggle with adults and peers around them," Tara Brennan, Psy.D., director of the Child Development Program at Children’s National Hospital, tells Romper. Tantrums in toddlerhood are often related to this power struggle. When a child has an idea of what they want, but someone else says differently, this can trigger an emotional reaction — a tantrum."

What seems trivial to you and I might in fact mean the world to a toddler. That rock they've kept on their nightstand for two weeks straight isn't just a rock, it's their rock. Expressing anger when you move that rock to dust might seem like an outburst, but it really might just be the only way your toddler knows to signal to you that they feel some kind of way about that very rock you just moved. Since they don't have the vocabulary to explain in certain terms what the rock means to them, they lash out.

"In essence, they are 'protesting' the loss where they were seeking to win a bit of independence," Brennan says. "As toddlers navigate this stage, they are likely to experience a wide range of emotions — elation and joy, trepidation, sadness, frustration, or anger, just to name a few. Toddlers are little people with big feelings."

You have probably seen the memes on social media and the hilarious lists that circulate where parents explain why their child is crying. Reasons like "I said good morning," and "I wouldn't let her eat dog food" are meant to garner a few giggles — and they absolutely do — but, when you're the parent of the toddler who throws an all-out tantrum at the drop of a hat, it can feel unbearable.

So, how can parents deal? Staying calm and helping your tot work through their feelings is crucial. "Parents can help their toddlers manage their emotions by acknowledging and validating them, and by modeling how to calm down in healthy ways when they get frustrated themselves," Casares tells Romper.

In addition to setting an example, Brennan says that giving toddlers an opportunity to feel a sense of control throughout their day can help. "Offer choices with their food, outfits, toys, and activities," Brennan says. "A simple choice of 'this or that' can go a long way."

Offering up a trade when your toddler wants something that they can't have can help quell their anger as well. "Think of it as 'trading, as opposed to taking,'" Brennan tells Romper. "A toddler is likely to better accept redirection this way, and a parent may avoid a negative emotional reaction in return."

But above all, cooler (adult) heads should prevail here. Brennan does not recommend punishment for toddlers who lash out, as this is a form of communicating their feelings. Instead, model how to talk through emotions and validate their feelings. "Parents should use emotion words to help build the child's emotional vocabulary," Brennan says. "For example, 'I know this is really frustrating,' or, 'It makes you feel sad when...' Introducing these words and emotional concepts during play and when reading together will be particularly helpful."

Dr. Whitney Casares, M.D., M.P.H., F.A.A.P., author of The New Baby Blueprint: Caring for You and Your Little One

More Like This
The Covid Vaccine For Kids Under 5 Has Been Sent To The FDA For Review
Should Parents Consider Delaying Covid Vaccines Until Closer To School Starting?
30 Easy Summer Activities For Kids That Work Rain Or Shine
How To Wash A Mattress Cover