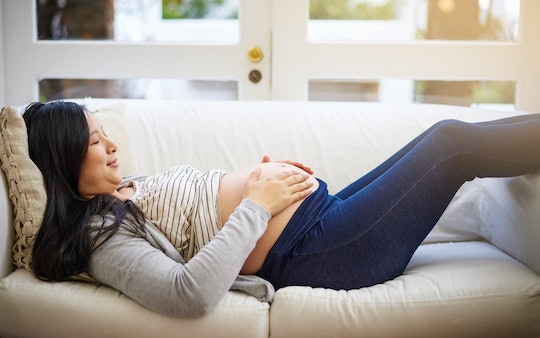 What Is An Anterior Placenta?

While not generally a cause for concern, here's what you need to know.

Before pregnancy, you could probably count on one hand the number of times you said the word “placenta.” Once you’re pregnant, the placenta becomes an organ about which you and your healthcare providers will have countless conversations. The placenta gives your baby oxygen and needed nourishment. And while it’s affixed to the wall of the uterus, it can take different positions: It can position itself on the sides, the back, or the front. The placenta can also sit at the top or bottom of the uterus. When your placenta sits at the front of your uterus, it’s called an anterior placenta. And, in general, an anterior placenta is nothing to be alarmed about.

What Is An Anterior Placenta?

Should I Be Worried About An Anterior Placenta?

Not necessarily. “In terms of risks to the pregnancy, the ‘ideal’ place for the placenta can be any of these locations,” Neale explains, “as long as it is also not covering the cervix, which we call a placenta previa, or close to the cervix, which we call a low lying placenta.” Placenta previa often needs monitoring, as it can result in the placenta blocking the baby’s way out, and might necessitate a C-section delivery.

While having an anterior placenta does not carry increased risks to the pregnancy, says Neale, one circumstance that could potentially prove it riskier is if the parent needs a cesarean delivery and the placenta is in the lower uterine segment of the uterus, which is the part of the uterus where the incision for a cesarean section is made, Neale says. “Depending on how low the anterior placenta is within the uterus, the surgeon may have to cut thru the placenta to get to the baby at the time of delivery.”

What Should I Do If I Have An Anterior Placenta?

As long as you don't also have a placenta previa, then there are no special precautions you need to take during your pregnancy, says Neale. As with any pregnancy, and any placenta placement, a precaution should be to avoid trauma, says Diana Ramos, M.D., OB-GYN and assistant adjunct clinical professor at Keck USC School of Medicine. For example, be super mindful of toddlers running around, and take care to prevent them from potentially running into your belly, or falling and hitting your abdomen, Ramos says. “In general, these are low risk, but absolutely seeking care on labor and delivery is advised.”

The bottom line? This placenta position alone shouldn’t cause you additional worries. Though always discuss it with your caregivers to make sure there are no potential complications. “As long as the placenta is not too close to the cervix or covers the cervix, then there are no increased risks to the mother or the fetus during the pregnancy or during delivery,” says Neale.