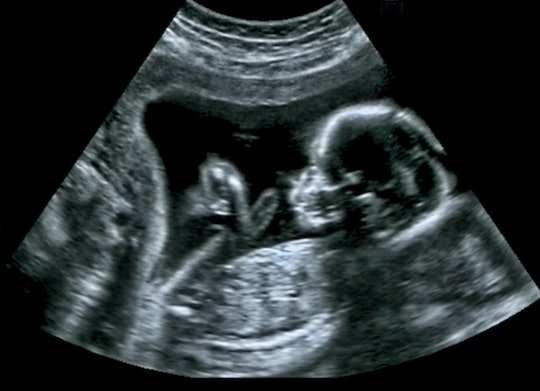 Everything You Need To Know About Baby Kicks During Pregnancy

Your little one is totally kicking it in utero. Here's what they're really doing in there and why.

Beyond a positive pregnancy test and puking on the regular, there’s nothing like feeling those first few flutterings in your belly to really know that you’re pregnant. And once you start to sense your baby’s movement, you’re not just going to marvel at it, but you’ll find yourself looking forward to feeling it daily. Because in a way, your baby’s kicking offers some reassurance that your fetus is doing just fine in there. But if you’ve been wondering about baby kicking during pregnancy, here’s what you need to know.

When Does Baby Start Kicking?

In order to understand when your baby can start kicking, you’ll need to know when your little one has the legs with which to accomplish the task. “Fetal limb buds are present at about six weeks gestation, and identifiable legs can be seen at about 9-10 weeks,” Dr. Kecia Gaither, MD, MPH, FACOG, double board-certified in OB/GYN and Maternal Fetal Medicine, Director of Perinatal Services at NYC Health + Hospitals/Lincoln, tells Romper. “Fetal movements can be seen at about eight weeks, and while kicking can be seen at about 9-10 weeks, movements are not felt by the mother generally until about 16-18 weeks.”

Those first flutterings are not actually called kicks, but rather “quickening,” according to a PubMed study. After all, itty bitty legs that are barely an inch long are not going to make much of an impact. “At first, movement feels like a little bubble or a butterfly in your uterus,” Dr. Lauren Demosthenes, Senior Medical Director with Babyscripts tells Romper. “It only lasts a second or two and may not be felt for another couple of days.” If this isn’t your first pregnancy, you might be quicker to feel quickening than someone who is pregnant for the first time.

As for what quickening feels like, well, some women might feel like they’re being tickled from the inside with a feather (yes, it can be a weird feeling). But once you get used to the sensation of what truly feels like a butterfly fluttering around in your tummy, it’s actually kind of adorable.

Why Does Baby Kick?

Although a soft, sweet kick might make you coo, a karate chop to the kidney might make you cross-eyed. Thing is, babies kick for a whole variety of reasons, according to Dr. Peace Nwegbo-Banks M.D., FACOG, of Serenity Women’s Health & Med Spa in Pearland, TX. “A fetus will kick, jab, and roll as part of their development,” explains Dr. Nwegbo-Banks. “Fetal physical activity is important for the health of their muscles, bones, and brain.” Dr. Gaither agrees, stating, “Fetal movements serve to give exercise to the limbs and muscles to prevent contractures,” she says. Contractures are the tightening of muscles, tendons, ligaments, or skin, according to Mount Sinai. And in another study, fetal arthrogryposis (which is another term for multiple congenital contractures) can occur due to reduced movement in utero.

How To Make Baby Kick

As your pregnancy progresses, you might be able to discern your baby’s wake and sleep patterns. (And womp, womp, they’re usually kicking it up like a Rockette in the middle of the night.) “Babies go through sleep cycles just like big people so they may have quiet times and more active times,” says Dr. Demosthenes. But that doesn’t mean that you can’t encourage a kick from your little baby. “Often babies will move in response to mom just eating a meal or snack, or even to a loud noise,” she says. While you don’t want to blast loud music at your belly, if you do decide to eat something especially sweet or savory, chances are it’ll make your little one kick up their heels in happiness.

Plus, if you’re in a position that your baby doesn’t like, expect a kick or two to let you know it’s time to move, momma. “In the third trimester, Baby might respond with a kick when Mommy is laying still and resting,” says Dr. Nwegbo-Banks. You don’t have to get up and race around the room — sometimes simply shifting your position is enough to get your baby to calm down…sans kicks.

And you can sometimes even “play” with your baby to get them to kick, too. “Mothers can at times elicit movement by thumping on their stomachs,” says Dr. Gaither. But don’t be surprised if you don’t get an immediate kick in return, she warns. “Fetuses move at their own accord.”

How Often Does Baby Kick?

For the most part, your baby should be moving around and thumping every day. But because you’re busy and moving about, you might not always notice when your kiddo kicks. Still, there is a certain amount of kicks that is considered normal for a baby’s daily movement, says Dr. Nwegbo-Banks. “I encourage moms-to-be to do kick counts,” she says. “There should be at least 8-10 kicks/hour for the majority of the day.” Don’t freak out if you don’t feel a kick for a while; it could just be that your little sweetie is snoozing.

Baby Kicking In The 3rd Trimester

Although kicking is crucial throughout pregnancy, it’s especially important in the third trimester. “In the third trimester, the baby’s movement also signifies fetal well-being, specifically adequate blood supply and oxygenation,” Dr. Nwegbo-Banks explains. And after week 28 or so, your baby’s kicking should be pretty consistent, Dr. Demosthenes adds. “If you notice a decrease in the movement, it’s a good idea to do a fetal movement count,” she says. “Sit or lay down quietly and count how long it takes for your baby to move 10 times.” But don’t just wait for kicks; any movement counts, including rolls, small motions, and kicks, too.

At some point, you might realize that you haven’t felt Baby moving for a while. Before you panic, make sure you stay calm. “If you have not felt 10 movements in the first hour, drink or eat a snack and count for another hour,” advises Dr. Demosthenes. “If you do not feel 10 movements in 2 hours, it is wise to call your maternity care provider.” An in-office ultrasound can make sure that your baby is safe and sound.

When it’s showtime (i.e. labor), you might wonder how your little one will respond. Rest assured, your baby will continue kicking during contractions, says Dr. Demosthenes. “The baby will still move during contractions, but it may be more difficult to feel,” she says. If you plan to give birth in a hospital, you and your baby will be connected to monitors to make sure that both of you stay healthy during delivery — and check for kicking.

There’s something magical about the first time you realize that you’re actually feeling your baby move. And as your pregnancy moves along, you’ll become even more aware of your baby’s specific schedule and when they like to move and kick. Soon, you’ll realize that, between sleeping and hanging out, your little one is totally kicking it (and you) in utero.