Trying To Get Pregnant 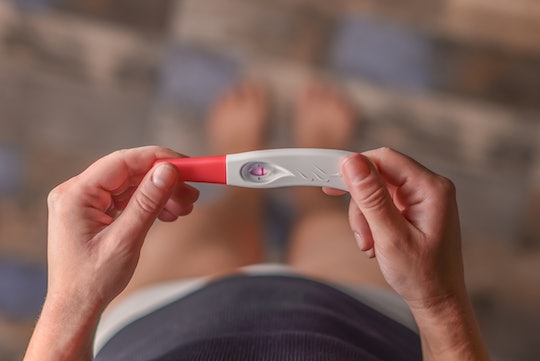 The Best Time To Get Pregnant Requires Some Math

Because if you’re trying to get pregnant, shrugging your shoulders and saying, “we’ll see” might only get you so far.

Pregnancy, in theory, seems simple, right? Some textbooks make it sound like this common situation one could find themselves in if one isn’t extremely vigilant. And that might be the case. For some people. But here’s the thing: You really don’t know until you try. You could be that person who gets pregnant after one fun month, or someone who spends months trying in many different ways… and trying… and trying. If you’re in the latter camp, figuring out how to get pregnant can feel like advanced trigonometry: unnervingly hard, and demoralizingly hopeless. You might beat yourself up for not going to see your doctor sooner. But then again, you didn’t know there was anything to even talk to your doctor about. Because getting pregnant is just supposed to happen. Right?

Wrong. “There’s only a several-day window in [a person’s] cycle when [they] really, technically, can become pregnant,” Princeton gynecologist Dr. Maria Sophocles tells Romper. So if you’re trying to conceive, best live by one of life’s universal truths: Timing is everything. Even if at this point in time pregnancy is a faraway thought in your mind, it can only help to start becoming familiar with the patterns of your cycle. And when you’re ready, you can implement this expert advice.

How Do I Even Begin To Understand My Cycle?

This is it. This is one of the keys to getting pregnant, says Sophocles. She explains that to work out the length of your menstrual cycle, you want to start counting the first day you start bleeding as cycle day one. “The last day of your cycle [is] the day before your next period begins.” Keep track of the days for not just one month, but several, so you can figure out the length of your average cycle, Sophocles advises. So if your cycle goes from 28 days one month to 32 days the next and 27 the cycle after that, it all amounts to 87 days, which when divided by three cycles, gives you an average cycle length of 29 days. Once you figure out an average cycle length, you can start targeting certain fertile times.

How Do I Know When I’m Ovulating?

If you’re having sex to become pregnant, sex needs to happen during the five days before ovulation or on the day of ovulation, Sophocles says. “Knowing when you ovulate can help you plan for sex at the right time and improve your chance of getting pregnant.”

Now that we understand where the goal posts are, let’s do some very personal math. Once you’ve figured out your average cycle length, Sophocles explains, “You always ovulate 14 days before that last day. So if your average cycle length is 28, 28 minus 14 is 14. But the most fertile days are the three days leading up to ovulation, and the day of ovulation. So the best chance of getting pregnant is to have sex during that time,” Sophocles says. “If you’re ovulating on, let’s say, day 14, the best likelihood would be to have sex somewhere between day 11, 12, 13, and 14.”

How Can I Tell When I Am The Most Fertile?

Now that you understand your cycle better, let’s talk about props. That is, tools to help ensure you don’t miss your window. Since you’re most fertile, says Dr. Lauren A. Bishop, M.D., assistant professor of Obstetrics & Gynecology at Columbia University Fertility Center, at the time of ovulation and the days prior, start tracking your menstrual cycle on your calendar or a smart phone app. “You can also use ovulation predictor kits to confirm your fertile window,” Bishop, a fertility expert, tells Romper. “Similar to pregnancy tests, ovulation tests measure a hormone in your urine which rises prior to your ovary releasing an egg.” After a few months of doing this, you may start to see a pattern, says Sophocles.

Is There A Wrong Time To Have Sex?

After ovulation, you can think about taking a break from the mental mathematics, as Sophocles says it’s highly unlikely to get pregnant more than a day after ovulation. Though she acknowledges that that might not be easy to believe, “because in every rom-com that’s ever been, the couple has sex one time and they get pregnant.” Great for cinematic comedic effect, not so great for our real-world expectations. “It does give you this sense that there’s almost no way you won’t get pregnant, no matter what time you have sex. But that’s just not the case,” Sophocles says.

Can Acupuncture Help Me Get Pregnant?

It’s worth a conversation with your doctor, and a discussion of your health and medical history, to consider the option. Acupuncture may have a positive effect, though expert opinions differ. The practice of acupuncture has been used to influence the body in a number of ways. “The Chinese word qi describes the body's intelligence, which is a form of consciousness that we often take for granted,” Dr. Jill Blakeway, licensed and board-certified acupuncturist and herbalist, and the founder of the Yinova Center, tells Romper. “Our bodies maintain balance by synchronizing and coordinating a variety of actions. This requires an awareness that takes place outside of our minds. We never have to think about calibrating our thyroid or remind ourselves to ovulate. Our body does that thanks to its qi.”

Blakeway further explains, “That ability to be aware is referred to as yin in Chinese philosophy, and the ability to act is called yang. Acupuncturists use needles to balance yin and yang and move qi to prompt the body to self-regulate and come back into balance.” When discussing fertility, Blakeway says, “Nowhere is the body's intelligence or qi more prevalent than in the interplay between various hormones during the menstrual cycle. Acupuncture works by giving a gentle prompt to the body to self-regulate.”

Though Blakeway tells Romper that there’s no "one-size-fits-all" advice for people looking to impact fertility at Yinova, if you’re interested in trying the practice for this reason, sessions during a cycle might look like this: “When we treat our patients weekly, we choose different acupuncture points based on where they are in their cycle. During the period, we support healthy flow and address any menstrual cramps. Before ovulation, we do acupuncture that increases circulation to the ovaries and the uterus to support the body. It builds a new uterine lining and gathers antral follicles, one of which becomes a lead follicle. At ovulation, we support a smooth transition from the part of the cycle governed by estrogen to the part governed by progesterone. After ovulation, we support healthy progesterone levels and address premenstrual symptoms.”

What Else Can I Do To Up My Chances Of Getting Pregnant?

Something to think about: “If you’re a 25-year-old woman and you’re struggling to conceive and your [male] partner’s 40, or 45, it’s also worth going to a reproductive endocrinologist,” Sophocles says. Something the doctor will likely do is examine the semen, she says.

Some doctors say maintaining a healthy diet may help, as might a reduction in stress. Then again, if both are possible, they are good ideas for everyone to try and implement in their lives, whether or not pregnancy is a goal.