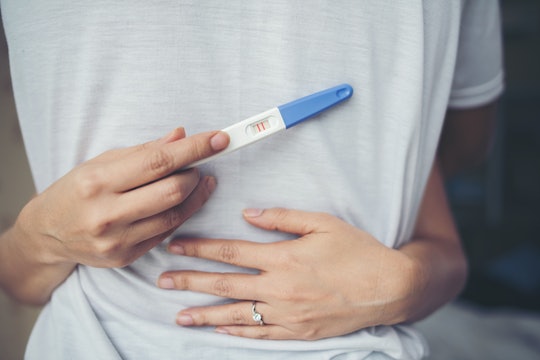 How Long Does It Take To Get Pregnant? Experts Break It Down

So much of pregnancy feels like a waiting game: you wait for ovulation, then to see if your period comes, and then if you’re pregnant (after waiting three agonizing minutes to find out), you wait for your first doctor’s appointment — and that’s just the first few weeks. You’re not pregnant as soon as you have sex (as anyone who’s ever rushed to take a pregnancy test mere days after trying knows), so how long does it take to get pregnant after sex? Below, experts explain when conception happens and how long you should wait to take a pregnancy test.

How long does it take to get pregnant after sex?

First things first; conception doesn’t mean the exact same thing to everyone. “People typically consider conception to mean when sperm successfully fertilizes the egg. Some people may also use the term to mean the day that the embryo implants in the uterus,” Tarun Jain, MD, reproductive endocrinologist and infertility specialist at Northwestern Medicine tells Romper.

How long it takes for pregnancy (conception) to occur will vary by situation. “Sperm can live inside the female reproductive tract for up to five days. An egg survives for 12-24 hours after ovulation. Therefore, conception (fertilization) could happen within minutes after sex, or it could take up to five days,” Jain says. It all comes down to timing, and when the sperm and egg meet will dictate the rest of the pregnancy timeline.

"Within 18 to 24 hours after the meeting of egg and sperm, the fertilization occurs and an embryo is created in the fallopian tube," Dr. Aaron Styer, OB-GYN and reproductive endocrinologist with Colorado Center for Reproductive Medicine in Boston tells Romper.. "At this moment, the genetic material of female (egg) and male (sperm) begin to direct the development of the embryo. Approximately five to seven days after fertilization, the embryo leaves the fallopian tube and enters the uterus where it implants and begins to grow."

Is it possible to feel something during conception?

In the days following conception sex, every flutter, gas pain, twinge, or cramp seems like a sign that you’re pregnant. But you can’t actually feel anything during conception.

“Conception (fertilization) cannot be felt since sperm and egg are microscopic and do not have any measurable impact on their surroundings,” Jain says. “ Other random sensations can sometimes be mistaken for such feelings. Implantation on the other hand, can sometimes be felt by women and some may even experience some mild 'implantation bleeding'.”

Conception and implantation are not the same; implantation is when the fertilized egg (the result of conception) implants into the lining of the uterus wall, which typically happens seven to 14 days post-conception.

How long after conception sex can you take a pregnancy test?

If you’re wondering how long after sex can you get pregnant, you’re probably also eagerly waiting to take a pregnancy test, and I get it, the waiting can seem impossible. But if you take a test too soon, it may be negative even if you have conceived because your levels of pregnancy hormone known as human chorionic gonadotropin (hCG) haven’t had time to rise. This means you can have a negative followed by a positive, but that negative is essentially a waste of a test (and those things are expensive).

So how soon after sex can you take a pregnancy test? Generally 10-14 days after ovulation is the sweet spot. “A standard home urine test is accurate 14 days post ovulation,” Dr. Sheeva Talebian, co-founder of Truly-MD.com and director of third party reproduction at the New York branch of The Colorado Center for Reproductive Medicine tells Romper. “Some are more sensitive and can be used as early as 10 days post ovulation.” To further muddy the waters, remember that pregnancy technically starts on the first day of your last period, so even this limbo period before a positive pregnancy test will be counted in your 40 weeks.

And if you think those two weeks feel endless (they do), then get excited to wait an eternity, or at least about nine months, to meet your baby.

Dr. Sheeva Talebian, co-founder of Truly-MD.com and director of third party reproduction at the New York branch of The Colorado Center for Reproductive Medicine