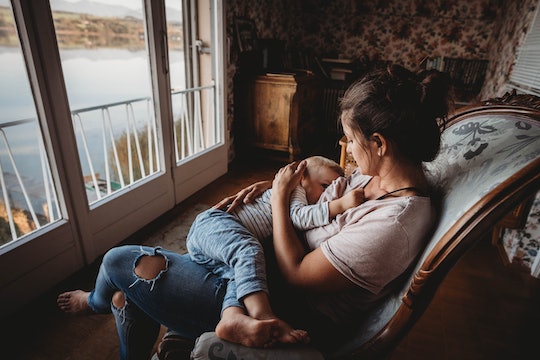 Can Breastfeeding Affect A Pregnancy Test?

Here’s what you need to know about breastfeeding, periods, and hCG.

Breastfeeding can be an amazing way for moms to bond with their baby, but like any other time in their adult life, breastfeeding moms can get pregnant, too. If you are nursing and suspect that you are pregnant, you may wonder if breastfeeding can affect a pregnancy test? Does it make their results inaccurate at all with all of those extra hormones flooding around?

“No, breastfeeding will not affect the pregnancy test,” says Allen Morgan, M.D., a double board-certified OB-GYN and infertility specialist and the medical director at Morgan Fertility and Reproductive Medicine, in an email to Romper. “Mothers when breastfeeding are concerned about this, but have no need to worry. The reliability of a pregnancy test is not affected since a pregnancy test measures the amount of the hormone hCG — human chorionic gonadotropin — in blood or urine. The production of this very specific hCG hormone is only produced from the placenta.”

So, while breastfeeding may wreak havoc on other hormones in your body, those hormones aren’t the ones a pregnancy test looks for. Urine and blood pregnancy tests are designed to detect the hormone human chorionic gonadotropin (hCG), which is produced when your fertilized egg attaches itself into the uterus and your pregnancy begins, explained the American Pregnancy Association (APA).

ClearBlue, one of the most well-known brands of at-home pregnancy tests, tells Romper in a Twitter message that breastfeeding should not affect pregnancy test results, but you should be careful to test at the right time. ClearBlue notes that if you are breastfeeding, and are unsure about your cycles, it's best to test about 19 days after sex.

Some women who are breastfeeding may decide to test if they notice their period stays away for a while after giving birth. And while a negative pregnancy test may rule out another bundle of joy as the cause, where the heck is your menstrual cycle after all this time?

And since breastfeeding can suppress ovulation and the return of your cycle, some people believe they can’t get pregnant while actively breastfeeding. Just be warned that it’s not a guarantee you won’t wind up with child again if breastfeeding is your only form of birth control.

“I can tell you breastfeeding is not an effective contraception,” says Victor R. Klein, M.D., board-certified OB-GYN at Northwell Health and vice chairman of Obstetrics & Gynecology at North Shore University Hospital, in an interview with Romper. “The further you are from the day you deliver, even if you are breastfeeding, you may have resumption of menses as well as ovulation. It could be two, three, or even six months postpartum when they resume their cycle while breastfeeding.”

More Like This
What Is Acid Reflux Tape? Chrissy Teigen Swears By It
Pelvic Pain During Pregnancy: What Causes It & How To Deal With It
40 Lovely, Lively, Lavish Girls Names That Begin With “L”
52 Short & Sweet Middle Names For Girls

This article was originally published on May 30, 2017