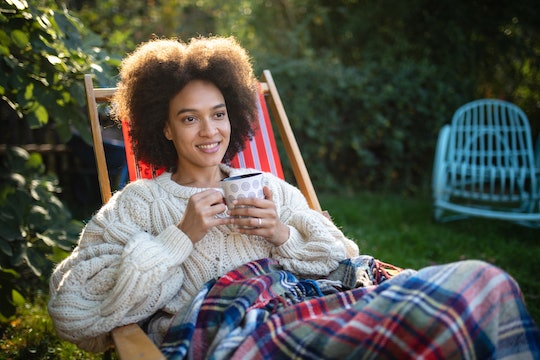 If you can't stop shivering in early pregnancy, you can blame those pesky hormones.

The first trimester of pregnancy is usually pretty rough. Everyone knows about the most common signs, like nausea, vomiting, headaches — and the constant need to pee — but many people don't realize that the first few months of pregnancy can involve so many other weird issues, like congestion and bleeding gums. Can early pregnancy even make you feel cold? According to some women, yes, and when I spoke to a few experts, they agreed that not only is it totally possible to feel more chilly than usual during those early days of pregnancy, but it also happens more often than you'd think.

As you already know, pregnancy means a huge hormonal shift, which is the reason for pretty much every odd physical feeling expecting women experience. According to Dr. Zaher Merhi, board-certified OB-GYN and the founder of Rejuvenating Fertility Center, that hormonal change is also the reason for all of the extra shivering.

"During pregnancy, temperature control is one of the parameters that undergoes major changes," Merhi tells Romper. Usually, these hormonal changes lead to an increase in body temperature, making pregnant women feel more hot than anything else. Some women experience the opposite, because their body is trying to make up for that feeling of warmth. "The reason behind this finding is that the pregnant woman's body is trying to compensate for that excess in heat generation, and may end up over-compensating sometimes. The body temperature control system may be sometimes too efficient at cooling the warm pregnant body. The body tries to regulate its own temperature by sweating, causing a person to breathe faster and motivating them to wear less clothing and seek cooler spaces. All of these could make a person feel cold."

Basically, feeling more cold than normal during your first few months of pregnancy is likely a result of your body doing the absolute most to cool you down. If it's just standard pregnancy chills, it probably won't even last very long. Dr. Katherine L. Palmerola, board-certified OB-GYN, tells Romper, "Temperature fluctuations in pregnant women are very common and related to the hormone changes — often most prominent in the first trimester. By the second trimester, hormones tend to stabilize and pregnancy symptoms — whether nausea or temperature changes — significantly improve."

If you just find yourself feeling extra cold once in a while, Merhi says it's probably nothing to worry about. "When [the cold feeling] persists for a long time, it might be a sign that the body has trouble warming itself," he adds.

If you find yourself constantly shivering no matter what you do or where you are, it's something you'll want to bring up to your personal OB-GYN. Palmerola points out that it could be due to thyroid fluctuations, which are common and can vary from trimester to trimester, but it could also be a sign of something bigger. "Cold sensitivity may indicate hypothyroidism — low thyroid levels," she says. "Your thyroid levels can be easily checked with a blood test and treated with thyroid medication which is safe for pregnancy and will lower your risk of pregnancy complications."

Merhi agrees that if the coldness isn't going away, you should bring it up to your doctor — it could be more than just excess blood flow or thyroid fluctuations. "In some instances, it may also be a sign of an underlying medical condition, including low blood pressure, anemia, or infection, especially if it is accompanied by other symptoms such as chills, abnormal vaginal discharge, severe abdominal pain, etc.," Merhi says. That's an important reminder to always fill your doctor in on any new symptom you experience, even if you think it sounds silly. "A small battery of tests may be enough to catch your condition early on and help you navigate safely through pregnancy," Merhi points out.