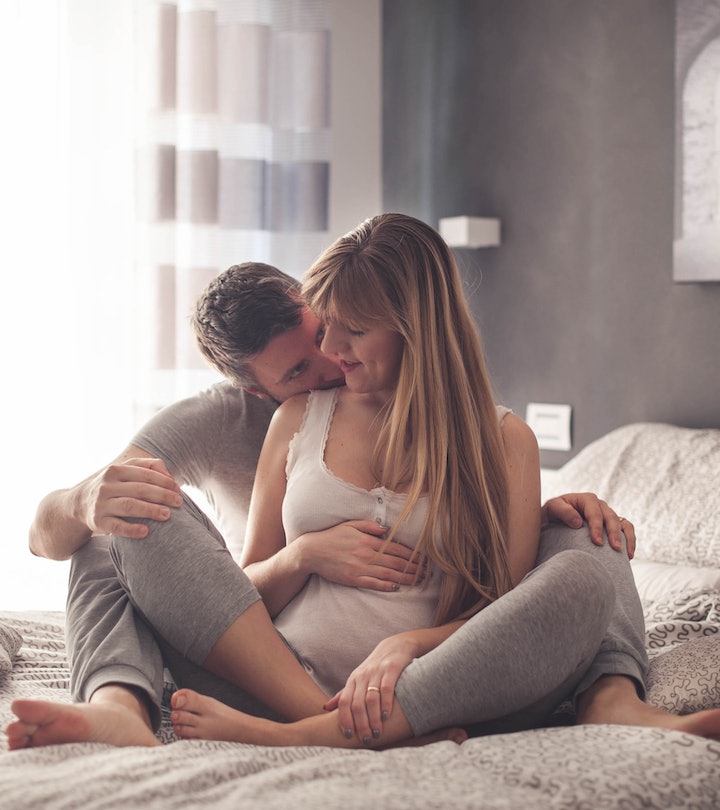 Will sex be what finally gets your baby head down?

When your baby isn’t in the optimum position for you to deliver vaginally, you may be tempted to try anything you can to get them to turn. There are all sorts of tricks, tips, and old wives’ tales out there that you can try — and one is a good, old-fashioned bedroom romp. But, can sex turn a breech baby? It sounds simple enough, but does it actually work?

There’s little to no data on exactly how sex may impact the positioning of a breech baby, but when faced with the reality that your baby isn’t in the ideal spot to give birth, it may be worth a shot. Birthing expert and doula Sara Lyon tells Romper that, if anything, it probably won’t hurt. “Generally, sex isn’t considered a go-to exercise for flipping a breech baby, but why not? The hormones of sex are good for you and baby, and if the rocking motion and body positioning help, go for it!”

If you’re skeptical, it makes sense. So, read on for a breakdown of what is known and why sex may (or may not) help turn your breech baby.

How Breech Babies Get That Way

When a baby has their head up in the top part of the uterus and their feet or bottom pointed down toward the birth canal, they’re considered to be in breech position. Prior to birth, you want your baby’s head to be pointed down to make birth as easy as possible. While some providers will deliver a breech baby vaginally, many will opt for a C-section for safety’s sake.

“Breech position may cause a woman to need a C-section for delivery, but generally it isn’t cause for medical concern,” physical therapist and founder of WiseBody PT, Patricia Ladis, tells Romper. “The main concerns are safety of the birth, safety for the mother who is facing a surgical birth, and the birthing parents’ emotions. Women should be monitored just like with any birth.”

But how does your baby even get in the breech position? Lyon explains that your own posture during pregnancy has a lot to do with it.

“If you’re hunched over, or slumped down with your bottom tucked under, a head-down baby’s neck is now arched backwards and that’s uncomfortable for them,” she says. “They want to be in a curled ball, so they flip upside down to curl their head back in.” Lyon recommends keeping an arch in your lower back to help prevent this, as well as using a lumbar pillow for support when lounging or sitting.

As long as your doctor has cleared you for sex during pregnancy, Lyon says that there are a few sex positions that could encourage your breech baby to move.

“All fours with a slight sway in your back is always a great position for optimal fetal positioning, during intercourse or not. Consider good ol’ doggy style, but add a tilt so that your chest is lower than your bum,” she explains.

Aside from the rush of the “love hormone” oxytocin that sex can bring about, the way your body moves during the act could gently nudge your baby the same way that other body manipulations might. “Another productive position utilizes a wedge cushion — think missionary, but your bum is on the thick part of the wedge so that your shoulders are lower than your hips,” Lyon tells Romper. “Both of these positions encourage the heavier bottom half of the baby to swing down towards your chest, correcting breech positioning.”

If Sex Doesn’t Work, There Are Other Ways

So, you can try sex if you’re medically cleared to do so, but what happens if it doesn’t work?

“Having sex will most likely not be the cause of a breech baby changing positions,” Ladis says. She does explain, however, that “different positions or angles work for each person” and notes that there are practitioners who are trained in different methods (like the ever-popular Spinning Babies) who can help. “Sometimes it can take a couple weeks from treatment for baby to turn,” she says. “The most success is working with a trained practitioner to assist the baby and the mother.”

Obstetrician Dr. Kim Langdon tells Romper that there is “no data” on the issue of sex turning breech babies. She also notes that when it comes to techniques parents can try at home to encourage a baby to turn that, “in general, nothing works on a reliable basis.”

Sometimes, despite all of your best efforts to encourage your baby to turn, intervention by a physician may be the way to go. “A doctor may offer a version — external cephalic version — which is the procedure to flip the baby to head first. It is done by pushing on the abdominal wall over the fetal head with one hand and one hand over the buttocks, pushing the butt upward and the head downward towards the pelvis,” Langdon explains. “Versions are about 50% successful but the baby sometimes turns back breech.”

While Langdon says that “most breech presentations usually undergo cesarean section,” it’s worth a conversation with your doctor if you want to try to get your breech baby to turn. Whatever you can safely do — sex included — may just be worth a shot.

Sara Lyon, birthing expert, doula, author of The Birth Deck and You’ve Got This: Your Guide to Getting Comfortable with Labor

Patricia Ladis, PT, CBBA, Author of The Wise Woman's Guide to your Healthiest Pregnancy and Birth and founder of WiseBody PT