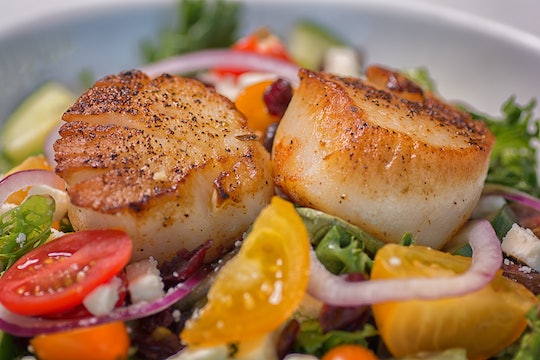 Can You Eat Scallops While Pregnant?

Yum. Seafood is just fine for pregnant bellies — but you may want to fire up the grill, first.

In the grand scheme of a pregnancy, food cravings may not rank very high on the symptom severity scale. But when you’re craving scallops, and literally the thought of any other food is making you queasy, then that craving suddenly becomes the center of your universe. Can you eat it? Should you eat it? The debate over raw fish consumption during pregnancy can swing with every Google search, but there are some consistent facts that remain relevant as you navigate the seafood markets.

First, don’t rule out seafood just because you’re expecting. Eating seafood while pregnant can actually be beneficial, thanks in part to its omega-3 fatty acids. “Seafood is high in DHA [docosahexaenoic acid], which is helpful for fetal brain development,” says Dr. Fahimeh Sasan, Founding Physician and Chief Medical Officer of Ob/Gyn at Kindbody. When it’s cooked, says Dr. Vonne Jones, obstetric and gynecological care provider at Total Women's Care in Houston, Texas, seafood is a great source of iron, protein, and zinc. But when making choices about what and how to consume it, remember that it’s not just about the type of fish you eat, but also how much of it you eat, and how often. Can you eat scallops? Yep (And yay!) … so long as you heat them up appropriately. Because a few raw slivers have the potential to leave you, well, wishing you’d had the vegetarian risotto instead.

How Do I Know What Kind Of Seafood I Can Eat While Pregnant?

One main reason you want a little more information before eating seafood while pregnant concerns mercury, or rather the amount of methylmercury in fish. Basically, there’s mercury in the air, and it gets into our waters where organisms make the transformation into methylmercury, explained the United States Environmental Protection Agency (EPA). The more fish consume other fish, the higher the former’s mercury content can become. So when approaching seafood, you can pick varieties that are lower in mercury, like anchovies, crab, flounder, lobster, salmon, shrimp, tilapia, and trout, among others, suggested the U.S. Food & Drug Administration (FDA). The good news about scallops is that they’re lower in mercury. As per the FDA, pregnant people can consume two to three servings of these varieties per week. On the contrary, the FDA noted fish with the highest mercury levels are shark, swordfish, and bigeye tuna, among others.

Can I Eat Raw Seafood If I’m Pregnant?

In some cases, this will be a personal judgement call; always discuss with your doctors and health care providers. “It is not safe to consume raw fish during pregnancy due to a bacteria that can grow on fish, which is called listeria,” says Jones. “Other viruses and bacteria have also been known to be present on uncooked seafood.” While Sasan tells Romper that sushi itself may not cause harm to pregnancy, you want to ensure the freshness of the protein.

“The biggest concern with consuming raw seafood is food poisoning — if the fish is not fresh, or has not been handled appropriately,” says Sasan. The FDA points to the weaker immune systems that may be found in pregnant people as a reason to maybe avoid the raw stuff.

How Can I Cook Seafood So It’s Safe To Eat?

When in doubt, consider skipping raw seafood. You can cook your fish a number of different ways, but it’s a good idea to have a food thermometer on hand. “It is safe to eat scallops during pregnancy if they are well cooked,” says Jones, who tells Romper that cooking them to 145 degrees Fahrenheit should make them safe to eat. Eating a raw oyster can lead to a vibriosis infection, as per the Centers For Disease Control and Prevention (CDC), but baking, frying, or boiling seafood takes down the potential for sickness. So you can enjoy proteins from the sea, just think about taking certain precautions before plating.