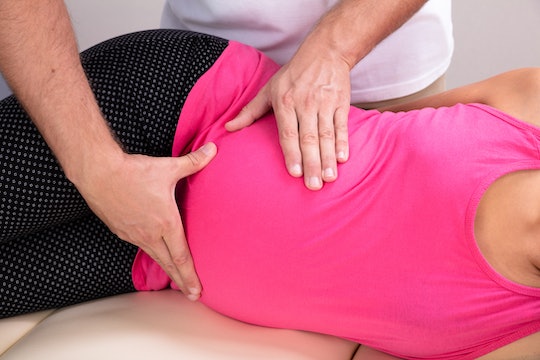 Can You Tell If Your Baby Is Breech?

Everything you need to know about breech babies and how to turn them.

Telling the difference between your baby’s hands and feet, much less their head and their backside, isn’t exactly difficult once they’re out in the world. But when your baby is in utero, it can be hard, especially for first-time parents, to differentiate between baby kicks and punches, and to conclusively tell what part of their baby they’re feeling. So how do you know if your baby is breech? And if they are, is there anything you can do to turn them?

What is a breech baby?

“Cephalic” is the term for a baby whose head is pointed down towards the pregnant person’s pelvis; “breech” refers to a fetus who isn’t in the head-down position. University of Michigan hospital’s site features has pictures of the three most common breech presentations. Fetuses can be “frank breech,” meaning their bottom is down and their legs are straight up, often close to their shoulders. This is the most common presentation; in August, a new mother posted a video on TikTok of her newborn who was so happy in the frank breech position that she stayed that way for a week after her birth. “Complete breech” means that the fetus’s knees are bent (almost in a criss-cross position), and “footling breech” means that their legs are stretched down and would be the first to emerge during delivery. According to the site Evidence Based Birth, a quarter of all babies are breech at the start of the third trimester, but most turn on their own: by 32 weeks, just 7% of babies are breech, and 3% to 4% of remain that way by the end of the third trimester.

How can you tell if your baby is breech?

Jenna Cecot, a Registered Diagnostic Medical Sonographer (RDMS) who works at a women’s health center in New Hampshire, tells Romper in an email that it’s quite difficult for expectant parents to tell if their baby is breech. “In my experience, the majority of patients cannot tell if their baby is breech or not. Bums and heads feel remarkably alike to the layperson,” she says. Though medical providers can usually tell the position of a fetus through an external exam, they can also make mistakes. An ultrasound can definitively show the position of the baby.

A 2008 study in the British Medical Journal found that if either of your own parents were breech-presenting at birth, you’re approximately two times more likely to have a breech-presenting baby yourself. Your baby is also more likely to be breech if you have placenta previa (in which the placenta is blocking the cervix), if you’re carrying twins, and if you have fibroids or an unusual level of amniotic fluid, according to Cleveland Clinic.

Elizabeth, a mother of two in Arlington, Virginia, tells Romper that she was told that her son was frank breech at his 20-week scan, and at every subsequent scan. Once she knew that he was breech, she used “belly mapping” — a process that she learned about through her doula and the organization Spinning Babies — to help her tell what position her son was in. The process, she says, “helped me feel closer to the bubs as he was growing.”

How do you get a breech baby to turn?

There are many at-home remedies to try to turn your breech baby. The CW’s telenovela Jane the Virgin includes an episode in which the pregnant protagonist tries to turn her breech baby using some of the most common techniques: doing a bear walk, trying to lure the baby’s head down by playing music, and burning moxa. (Her baby flips at the end of the episode.) During her first pregnancy, Elizabeth tried holding frozen peas up by her baby’s head (the theory is that the baby will move away from the cold), and visiting a chiropractor who specialized in the Webster Method, a technique that is supposed to help align a pregnant person’s pelvis and encourage their baby to flip.

If a baby has not flipped by 36 to 38 weeks, medical providers will often attempt a procedure called an External Cephalic Version, often just called “ECV” or simply a “version.” Cecot explains that, during an ECV, a doctor “pushes with one hand on the baby's bottom, and one hand on the head, and tries to rotate [the fetus] like the hands on a clock.” Cecot describes the procedure as “deceptively simple,” but noted that it’s not guaranteed to work (University of Michigan hospital cites the success rate of ECV’s as 58%). In her 15 years of experience, Cecot has seen that babies either flip pretty easily or not at all. “It seemed as if the babies who were going to go, would go easily,” she says.

Elizabeth’s ECV was unsuccessful, and her firstborn remained breech until her scheduled C-section. Her second child was also breech-presenting for a time, but, Elizabeth explains, “I did nothing aside from regular prenatal yoga and I kept up my running all three trimesters. No spinning babies, no frozen peas.” Her daughter nonetheless flipped to the head-down position during her third trimester.

Cecot says that, in her years of experience, she sees that some babies just won’t budge. “Some babies seem to be flippers. I'll see them flip flop from breech to cephalic and back again in the third trimester. With those babies, I'm usually optimistic that they'll end up cephalic. It's the babies that are breech for weeks on end after 28 weeks that I think are just happy to be there, and usually stay breech.”