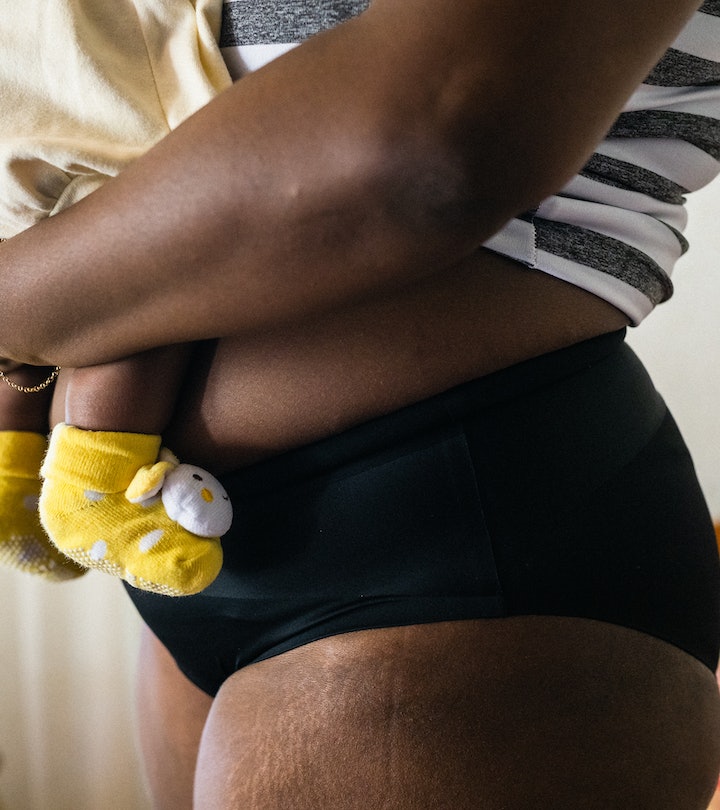 And, when you need a physical therapist’s help.

OK, everyone’s belly feels squishy after giving birth. But if you notice you’re having excessive back pain, your stomach is making a dome or cone shape in the middle when you move around, or it’s feeling softer around your belly button than it does elsewhere, it could be diastasis recti. Diastasis recti, a separation of your ab muscles, is pretty common — 60% of birthers will experience it, according to The Cleveland Clinic. It may take a few months of consistently doing diastasis recti exercises to help heal them, but you won’t deal with the symptoms forever.

If you’ve heard about diastasis recti on social media — on Tik Tok, the hashtag #diastasisrectiexercises has 89 million views — experts want you to know you don’t have to buy an influencer’s special workout plan to heal your abdominals.

“There’s a lot of fear mongering out there right now about diastasis and it can seem really scary. It has increased the amount of self-referrals I’ve gotten, and patients going into their OB asking to be referred. But I hate the fact that it’s driven by fear, because it’s the last thing someone who is postpartum needs. The benefit is that people are hearing about this and there are exercises we can do to help you feel your best postpartum,” says Valerie Adams, PT, DPT, board-certified clinical specialist in women’s health physical therapy at Duke Health.

Some of those exercises can even be done at home, experts say.

What is diastasis recti?

You know what we call a six pack? Technically those are called rectus abdominis muscles. During pregnancy, these muscles split down the middle along a band of tissue called the linea alba, says the Cleveland Clinic. After giving birth, some people’s muscles retract and heal along that line on their own. But for some, they remain separated, which can lead to some undesirable health stuff later on, like a hernia.

How do I know if I have diastasis recti?

The Cleveland Clinic also notes pain during sex, feeling weakness in your abdomen, lower back pain, or a jelly-like feeling around your belly button as red flags for the condition. If you’re concerned you might have diastasis recti, you can check for it yourself at home.

“You can screen yourself for diastasis by laying on your back on the floor, putting two fingers in your belly button and pushing down into it. As you keep your fingers placed there, gently raise your head and shoulders off the floor and you’ll feel that separation,” says Brook Orvis, PT, DPT, physical therapist at Duke Health.

When to start diastasis recti exercises

Orvis and Adams agree that as long as you’re not experiencing any pain or discomfort, it’s safe to start exercising gently as soon as you want postpartum (but don’t rush it, you’ve earned as much rest as you’d like).

“One of our deepest core muscles, called the transverse abdominis, forms a corset around our body. Strengthening it is safe to do starting Day 1 postpartum, assuming there’s no pain,” says Adams.

Before you dive in, you should know that exercises for diastasis recti are not the same as your typical core workout. Adams notes that there aren’t two or three specific exercises that will heal it for everyone, either. The one universal thing that will help is strengthening your transverse abdominis muscles, which kind of act like a corset in the body. Here’s how to find out what engaging it feels like:

“Try exhaling and pretending to zip up a tight pair of pants, or gently roll your belly button to your spine,” Adams says. “Master engaging them that way in all positions, like sitting, standing, while walking, and laying down.”

Once you know you’re using the right muscles, just practice engaging them a few times throughout the day. “Activate your transverse abdominis muscle three times a day, 10 reps each time,” says Caitlyn O’Sullivan, PT, DPT, physical therapist at Baptist Health Jacksonville. “Sit down with your hands placed on your stomach just above the hip bones. Think about bringing your belly button back towards your spine. You should feel the muscle contract into your fingers. This is not a forceful movement but a gentle tighten and hold without holding your breath.”

All three experts advise people with diastasis recti to avoid movements like crunches, including sitting straight up from a lying down position, or heavy weight lifting. Anything that makes your stomach cone out is something to hold off on until your abdominal separation is healed.

When to see a physical therapist for diastasis recti

If you’ve been trying to strengthen your transverse abdominis muscles at home but aren’t seeing much progress, or you’re having a hard time determining if you’re engaging them correctly it’s time to schedule an appointment with a physical therapist.

“With diastasis, the thing we’re most worried about is developing a hernia, so often I tell people if you’re lowering your activity level because of the belly doming out or sinking in when you move, that’s when I would come in to see a physical therapist. Typically within six appointments you should see some improvement in your symptoms,” Orvis says.

“If you’re having persistent pain, pelvic floor issues like urinary incontinence, or vaginal pressure or pain, there may be a little bit more going on than just some core weakness,” Adams adds. “There are so many changes that happen during the course of a pregnancy with muscles shifting. Sometimes just having one session to make sure you’re able to re-identify with your muscles is enough. Even if you’re not having big issues, it’s great to collaborate with someone to get you on the right path.”

So, whether you’re a fitness fanatic who isn’t sure how to safely get back to their routine postpartum, or just a new parent trying to heal this strange feeling in your belly, there’s support out there for you. And who knows, maybe a little transverse abdominis exercise around the house will get you better in no time.

More Like This
Dealing With Postpartum Back Pain? Physical Therapists Share Their Tips
Pelvic Floor Exercises You Can Do At Home To Stop The Spritz
OB-GYNs Explain The Connection Between Stress & Miscarriage
What Foods Fight Nausea During Pregnancy?
What Parents Are Talking About — Delivered Straight To Your Inbox