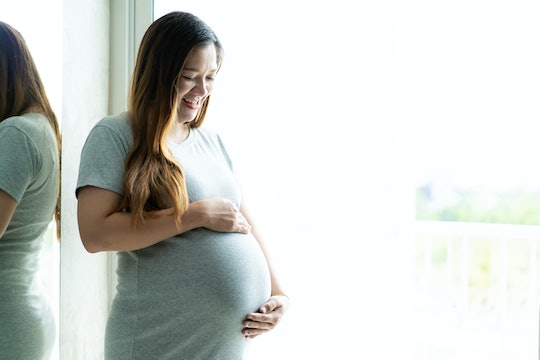 Can A Dark Neck During Pregnancy Actually Predict Baby’s Gender? Experts Weigh In

Is there no end to pregnancy myths?

People sometimes find meaning in the many, many ways the body changes during pregnancy. In some cases, minor differences in your complexion are said to predict the sex of your baby. So does a dark neck during pregnancy mean you’re having a boy, or is that simply an old wives’ tale? Here’s what experts have to say about this phenomenon.

During pregnancy, some people develop dark patches on the skin around their face and neck. It’s totally common. “If you develop dark splotches on your face, you could have melasma, or the mask of pregnancy. This skin condition affects up to half of the pregnant women,” Dr. Gretchen Frieling, a Boston Area board-certified dermatopathologist and mother of two young children, tells Romper. Some folks believe the appearance of dark skin on the face and neck means the person is having a boy, as noted in Baby Gaga, but experts have a different take. “There is no correlation between melasma or any skin changes and the sex of the baby,” Dr. Caitlin Szabo, OB/GYN at Taylor, Suarez, Cook, Khan, and Zertuche, tells Romper.

“Melasma on the neck does not indicate the sex of the baby. These markings are simply the result of the body producing more melanin than normal,” says Dr. Frieling. It’s the same hormone responsible for tanning, in fact. Getting melasma doesn’t mean anything in particular, other than the fact that your hormones are causing skin to darken. It’s just one of the many ways pregnancy affects your body, similar to numb, tingly hands or changes to your taste buds. Yes, pregnancy changes affect way more than the growing bump.

Will it go away on its own?

In most cases, experiencing the mask of pregnancy is a temporary thing that fades after the baby is born. But if your melasma won’t go away after pregnancy, and you’d like to get rid of the marks, then visiting a dermatologist is recommended, according to Romper. A hydroquinone-topical solution, as well as several different acid treatments, are among the things your derm can use to help melasma fade away. Just remember that there’s nothing harmful about melasma, and leaving it alone isn’t likely to cause any sort of health issue.

How did this idea originate?

So where does the idea even come from? It’s one of the many old wives’ tales about pregnancy and childbirth, like the idea that a full moon leads to labor, according to Romper. “There is so much folklore associated with pregnant women and people trying to determine the sex of a child,” says Dr. Frieling. “None of these are backed by science.” Before modern science, people came up with some pretty creative ways to guess the sex of the baby in the womb, and some of those ideas sill hang around today.

To accurately determine the sex of your baby, experts recommend taking a “wait and see” approach. “Ultrasound is the most accurate way to determine the sex of the baby,” Dr. Szabo explains, “but even ultrasounds can be wrong a very small percentage of the time, so the best way is to look after the baby is born!”

Folkloric beliefs about the mask of pregnancy don't offer any scientific guarantees. On the other hand, it can be fun to indulge in some of these old superstitions, and there's no real harm in them. So if a dear relative or friend claims to know what you're having just by looking at the pigmentation on your neck, no big deal. Whether it's revealed through an ultrasound or the birth itself, everyone will know the sex of the baby soon enough.

More Like This
How To Increase Your Sex Drive While Pregnant
Are You Leaking Amniotic Fluid Or Is It Normal Discharge? Experts Explain
What Does Amniotic Fluid Smell Like? A Nurse Explains
The 16 Best Affordable Maternity PJs & Lingerie Sets On Amazon

This article was originally published on Aug. 24, 2018