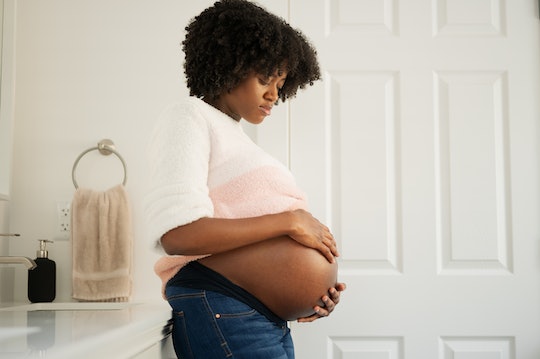 Here's Why Your Vagina May Take On A New Scent While Pregnant, According To Experts

No, you're not imagining it.

It seems like some kind of cosmic joke that a heightened sense of smell is a pregnancy symptom along with a change in your vagina’s scent, but there you go. "Pregnant women appear to have a heightened sense of smell in pregnancy. Many things smell different or more strongly in pregnancy from foods to toiletries to body odor," OB-GYN Kate Killoran, M.D., of Your Doctors Online tells Romper. "There is limited scientific data on this, but the theory is that an increased sense of smell in pregnancy would be an evolutionary advantage. It would help the pregnant woman and her fetus avoid potential toxins like spoiled food." And, apparently, it can help you notice a change in the way your vagina smells.

Researchers have tested other theories, such as whether the hormone estrogen — which rises throughout pregnancy — could be the factor behind this increased sense of smell. A 2018 study in World Journal of Otorhinolaryngology debunked that idea with a simple fact: Hormones continue to rise during pregnancy and therefore the sense of smell would become more heightened as pregnancy goes on, not less. Hormones are, however, the culprit in what’s changing the smell down below.

"Hormones control so much of our bodily experiences — from our temperature to our mood, and yes, the way we smell," OB-GYN Dr. Mary Jacobson tells Romper. "When women notice their vagina smelling differently during pregnancy, the effect is often due to a woman’s own sense of smell. The smell and taste of certain foods, for example, can change radically during pregnancy."

But while a different scent is normal, it’s important to note that excessive itching, burning, redness, or strange discharge is not and can be signs of a yeast infection. "If the smell is associated with itching, burning, or unusual redness or texture, that’s a cue that something is medically wrong. Follow up with your doctor about the possibility of infection," Jacobson says. Unfortunately, as Mayo Clinic noted, yeast infections are more common in pregnancy than any other time of your life thanks to all of that increased estrogen, so be extra mindful.

If you notice a distinct vaginal odor, but it’s more of a fishy, foul smell, you might be suffering from bacterial vaginosis. Mayo Clinic wrote that bacterial vaginosis, an inflammation of the vagina, can be treated with medication from your doctor and is often caused by a change in your pH balance. (Thanks again, pregnancy.) During pregnancy or not, an unpleasant odor combined with foamy yellow or green discharge can indicate a sexually transmitted disease such as trichomoniasis or gonorrhea, according to Parents. Chlamydia also causes a bad odor, so get tested by your doctor if you’re having odor with other symptoms.

But don't get too wrapped up in the smell of your vagina if you aren't noticing other symptoms like itching, redness, or painful urination. Killoran says it's most likely just pregnancy giving your vagina a different smell. "Some women may have a vaginal infection which is changing the smell of the vagina, but outside of an infectious source, the change in smell is likely due to changes of pregnancy," Killoran says.

And don't let yourself feel like you need to "fix" any new scent. You should avoid any products that promise to alter your vagina's scent or pH balance. "I recommend against douching or using scented products, both of which can cause bacterial vaginosis and inflammation in a very sensitive area that’s already good at self-cleaning. BV is a risk factor for preterm labor and delivery," Jacobson says. "As long as women are prioritizing basic hygienic practices, cleaning the vaginal area with warm water and gentle soap, and removing tight and/or sweaty clothing after exercising to let the area breathe, there’s no need to worry about the smell."

Killoran agrees and tells Romper that once you rule out an infection, just let your vagina do its new scent thing. "As long as the vaginal flora is normal, there is not much else to do." The vaginal flora is the bacteria that lives in the vagina and helps keep it healthy. When it's all in check, it produces lactic acid and other substances to stop yeast and other bad guys from taking over.

It's also worth noting that your vagina’s pH balance isn’t the only thing that can affect your vagina's scent. If you've been on a long walk, sweat can give you a new scent, or if you're wearing underwear that's too tight, it can change your body's aroma. But don't worry. It’s totally normal for your vagina to sport its own pregnant scent, as long as it’s not accompanied with other symptoms that could mean an infection.

This article was originally published on Feb. 3, 2016