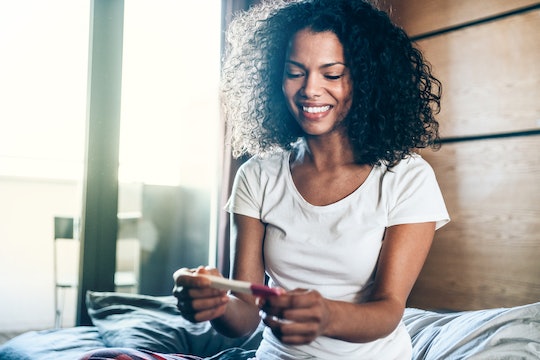 How Many Days After Ovulation Should You Take A Pregnancy Test?

It's all about patience.

Trying to get pregnant can be a frustrating process. I tried for a whole year before I finally conceived, and every month, I went through a torturous waiting game to find out if I was pregnant or not. I would always be quick to take pregnancy tests, and would end up taking one every day to see if the lines turned positive. But I later learned there is a science to the timing. If you are trying to conceive, you also might be wondering, how many days after ovulation should I take a pregnancy test?

For the most part, it’s possible to take a pregnancy test fairly soon after your predicted ovulation time. “Depending on the length of a woman's menstrual cycle, the earliest time to take a pregnancy test and gain a positive result is about 8 days post ovulation to detect trace levels of beta hCG (the pregnancy hormone),” Kecia Gaither, MD, double board-certified in OB/GYN and Maternal Fetal Medicine, tells Romper via email. There are definitely some variables to keep in mind, though, including the type of home pregnancy test you’re taking. “One of the tests that can detect pregnancy early is the First Response home pregnancy test kit, which can detect the pregnancy hormone, HCG (human chorionic gonadotropin) in the urine as early as 6 days before the first day of the missed period (or basically about 9 days after ovulation, and presumably fertilization). Some tests aren't quite that sensitive; but most of the commercially available tests will be able to detect the hormone by the day you miss your period, which is about 14-15 days after ovulation,” Mary Jane Minkin, MD, who has taught at Yale School of Medicine for over 37 years, tells Romper in an email.

Does this mean it’s wise to take a pregnancy test before you’ve experienced other signs you might be pregnant, such as a missed period? “It is of course fine to take a test before you miss your period — however, if it is negative you certainly can repeat the test in another 2-3 days, or so,” says Dr. Minkin. On the other hand, waiting until you’ve actually missed a period to take a pregnancy test may reduce the potential for a false negative result, Dr. Gaither explains. It also depends on when you ovulate. The Mayo Clinic Health Library noted that because the timing of ovulation is different for every woman and varies each month, and because implantation timing can vary, too, waiting for a missed period is the most reliable time to test. With that in mind, there’s no harm in testing, and then re-testing a few days later, if you’re so inclined. Hey, it’s a big deal, so of course you want the news on whether you’re pregnant ASAP.

Again, the type of test you take can make a bit of a difference, so be sure to read the fine print. There are early detection tests that are designed to be a little more sensitive in detecting hCG, so even a tiny amount may be detected. These tests, as noted by ClearBlue, can detect hCG about six days before your missed period, but with only 79 percent accuracy, and the longer you wait, the better the results.

I know firsthand how annoying waiting can be, but for the best, most accurate results, you should wait to test until your missed period. Hopefully soon, the only waiting you’ll be doing is for your due date to arrive.

More Like This
When Does Pregnancy Horniness Kick In?
Barre Could Be The Low-Impact Prenatal Workout You Need
This Is What Experts Say About Eating Hot Dogs During Pregnancy
Considering Getting A Tattoo While Pregnant? Here’s What To Know

This article was originally published on July 13, 2017