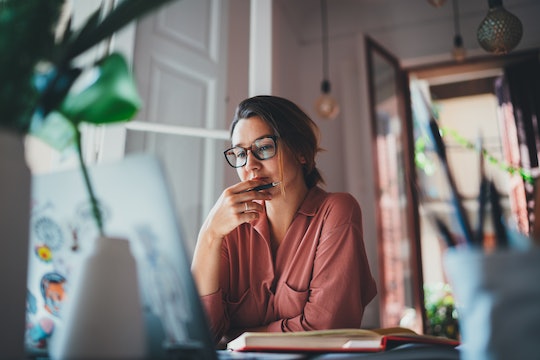 These Are The Signs Of Implantation, According To Doctors

Here’s what OB/GYNS want you to know.

When you’re trying to conceive, it’s understandable if you want to know the earliest signs of pregnancy possible. In this case, learning more about implantation symptoms and their causes could provide clues about whether you’re potentially pregnant. Here’s what three OB/GYNS had to say about the common symptoms of implantation, as well as how to make the most of this information.

“Implantation is the process of the embryo implanting into the uterine cavity and may occur 6-12 days post ovulation,” Dr. Temeka Zore, Reproductive Endocrinologist of Infertility and OB/GYN at Spring Fertility and Modern Fertility Medical Advisor tells Romper in an email. “Some people may notice signs or symptoms of implantation which may include light spotting or minor cramping, and other people may have no noticeable signs of implantation, and either can be normal.” Other potential signs of implantation include nausea, dizziness, or light bleeding, Alexandra Bausic MD, Board Certified OB/GYN with Let's Talk Sex, tells Romper. And again, sometimes your body won’t offer up any cues at all. “Implantation can happen silently and the pregnant woman won’t notice anything different in the best cases,” says Dr. Bausic.

Blood typically means you aren’t pregnant, so what causes implantation bleeding? “This bleeding is caused when the just-fertilized egg burrows into the lining of your uterus,” Dr. Zachary Hamilton, OB/GYN, Austin Regional Clinic based in Austin, Texas, tells Romper. In addition, very light spotting during the earliest stages of pregnancy is not uncommon. In a study of 151 pregnant women, 14 recorded some vaginal bleeding within the first 8 weeks of pregnancy, according to Human Reproduction. “Nearly all women with bleeding went on to have successful pregnancies,” the study reported. Talk to your doctor if you have any concerns about bleeding in early pregnancy.

How Implantation Bleeding Differs From A Period

How can you tell the difference between implantation bleeding and a period? It isn’t always easy. “These implantation symptoms can sometimes be confused for a period as they typically happen at the same time as a woman’s cycle. Light bleeding or spotting that lasts just a day or two is common and could be a sign of early pregnancy,” says Dr. Hamilton.

Examining the blood may provide some clues, however. “The implantation blood usually starts pink and turns brown. Your period blood is redder and much more consistent, with clots. The duration of implantation bleeding is usually shorter” at two to three days, says Dr. Bausic.

Even if you’re carefully attuned to your body’s potential signs of implantation, there’s one way to know for sure. “The best indication to determine if you are pregnant is to take a home pregnancy test on the day of your expected missed period,” says Dr. Zore. Then you’ll have the info you need about whether that spotting was really a sign of implantation.