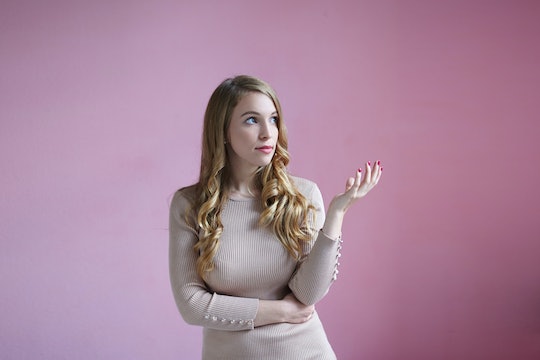 Everything You Need To Know About Implantation Bleeding, According To Experts

When you're trying to conceive, it's hard to wait the two weeks or so between your fertile days and taking an at-home pregnancy test. During this period of anticipation, it's natural to interpret the slightest change in your body as a possible sign of pregnancy. The only thing worse than getting your hopes up because you feel a little more tired or out of breath than usual, is to mistake implantation bleeding for your period and assume you're not pregnant. So what color is implantation bleeding? It's time you learn to tell the difference between this early sign of pregnancy and your regular menstrual cycle.

To distinguish implantation bleeding from a normal period, it's helpful to understand the process behind it. According to Tran, "After fertilization occurs in the fallopian tubes around the time of ovulation, the embryo travels down the fallopian tube to attach to the wall of the uterine cavity. During the attachment progress, some blood vessels break down." The broken blood vessels lead to the old blood (i.e. brownish) spotting you may find in your underwear. However, Bustillo notes that implantation bleeding "remains an unproven hypothesis" and "does not occur in the majority of pregnancies."

Timing is also important when you're trying to pinpoint the cause of bleeding. Bustillo and Tran say implantation bleeding occurs approximately 10 to 14 days after conception, while Yu gives an earlier estimate of three to seven days post-conception. Since your period isn't due until about two weeks after ovulation, you can probably guess implantation bleeding if you experience light spotting much earlier than that. It can be harder to guess if the bleeding overlaps with when you expect your period. Luckily, there are other differences to help you compare a normal period with implantation bleeding.

When asked how a woman can tell whether she is experiencing implantation bleeding or a regular period, Yu says, "Implantation bleeding is much lighter, usually lasting one to two days, not requiring the patient to change pads. If in doubt, talk to your OB-GYN and confirm the diagnosis with blood work or ultrasound." Bustillo also notes that a pregnancy test may be the best way to confirm the cause of your bleeding. "Implantation bleeding, when it does occur, coincides with the time of an anticipated menses. Therefore it can be confusing to know exactly what is going on. Generally implantation bleeding is spotting only, while a menstrual period is heavier. If the bleeding is accompanied by potential early pregnancy symptoms such as fatigue, nausea/vomiting, and frequent urination, a pregnancy test would be indicated to solve the dilemma."

Finally, Tran agrees that implantation bleeding is usally shorter than menstruation and may be accompanied by early pregnancy symptoms. "Most periods last about four to seven days [and are] heavier with a bright red color blood, whereas implantation bleeding comes a few days sooner than the next expected period and only lasts for a few hours to two days only, along with signs like breast tenderness, mild cramping, headache and mild nausea."