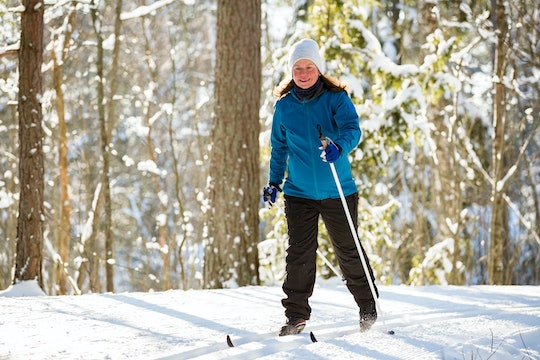 Is It Safe To Ski While Pregnant? Experts Explain

Here’s when to stay in the lodge with some hot cocoa.

With the Olympics just around the corner, winter sports are on everybody's minds. There's nothing like watching top athletes score big on the slopes to make even amateur enthusiasts consider packing up their poles and to hit the powder. But what if you're expecting? Is it safe to ski when you're pregnant, or are you better off staying behind at the lodge with a mug of hot cocoa?

As you're probably aware, exercise in general usually gets the green light for moms-to-be. Of course, "exercise" is a relative term — there's a pretty big difference between taking a brisk walk around the block and hurling yourself down a mountain at breakneck speed. So when it comes to the question of whether or not you can safely ski during pregnancy, the answer isn't a simple one.

“While staying active during pregnancy is important and generally OK, there are certain sports and activities that are better than others. Due to its high speed and impact, skiing may not be the best option as it’s a bit riskier than general exercise,” Dr. Jessica Shepherd, an obstetrician and Chief Medical Officer of Verywell Health, tells Romper.

What Are The Risks Of Skiing While Pregnant?

If you’ve ever been skiing, you know how easy it is to fall down. And not just professionals at the Olympic take major tumbles down steep paths. When you’re pregnant, the risk of injury isn’t just a threat to your own safety, but potentially your baby’s as well.

“Mainly, there’s a higher risk for serious injury to yourself and the baby since you use your whole body for skiing,” Shepherd explains. “There are risks such as falling, which can happen often while skiing, and trauma to your midsection can occur.”

Taking a tumble might not be such a huge deal in the first trimester, but as birth educator and doula Sara Lyon explains, “The obvious greatest risk, and the one that is least predictable, is miscarriage.” She adds that this is a risk to consider across all trimesters when considering participating in a high impact sport like skiing.

“Making it past that first trimester is crucial; the second trimester is when many pregnant people start to relax a bit and ease along their pregnancy journey,” says Shepherd. “Skiing may be OK during this time as well, but again, it all comes down to your unique situation and what your doctor recommends — are you a high-risk pregnancy? Experienced past miscarriages? These are things you should consider before partaking in a sport while pregnant.”

Not only are injuries more of a concern when you're pregnant, but the state of your ever-changing body, especially as you progress in pregnancy, could make you more likely to get injured in the first place. Pregnancy, after all, changes your center of gravity and sense of balance.

“The third trimester is going to be when a doctor is most likely to suggest you not ski at all — for one, your belly will be bigger, making skiing difficult to begin with as it’s a full-standing activity,” Shepherd tells Romper. “Your baby is also big at this point and any injury can do serious harm. You’re also more susceptible to fatigue, and skiing will probably be too strenuous.”

The average woman's mobility does seem to decrease as the size of her bump grows; that could be one reason why, even though there have been pregnant athletes who competed in the Olympics (such as snowboarder Amelie Kober, who was two months pregnant when she competed in 2010 Vancouver Games, according to Spliter), most of them were in the early phases of gestation.

How Your Skill-Level Comes Into Play When Pregnant

There are multiple factors to consider if you want to ski while pregnant, including how far along you are in your pregnancy and whether or not you're an experienced skier.

“It’s not an activity I’d recommend to new skiers especially — in the process of learning to ski, falls are likely. If you’re an experienced skier and know what you’re doing, you’re better off, but certainly not risk-free,” Shepherd says.

If you are an experienced skier and do decide to take a go at it while pregnant, it’s important to consider exactly how you’ll take to the slopes.

“Falling has the greatest potential to cause harm in pregnancy, so use your common sense and choose runs that are more like a stroll down the mountain, less of a juggernaut,” recommends Lyon. “There is greater potential for muscle strain in the late second and third trimesters, particularly around the abdomen and pelvis, so use caution when choosing your runs — recognize what your body needs on that specific day instead of planning around your pre-pregnancy abilities.”

How Do You Know If You Should Ski While Pregnant?

Lyon suggests considering your skill level and how your body is responding to pregnancy when deciding whether or not to ski while pregnant. “It’s not a binary answer because every pregnancy is different — in fact every stage of every pregnancy is different — and just as ski runs and skill levels are unique,” she explains. “Most importantly, it’s up to your personal risk tolerance level — do you love skiing so much that you’re willing to live with the ambiguity of the answer? We’re making choices like that every single day when we’re pregnant, and when we’re parenting.”

Additionally, your doctor is the perfect resource to help guide you through this decision. “If you want to ski and know you’re pregnant, it’s best to speak to your doctor; they will let you know if it’s safe to do so or not,” says Shepherd.

Ultimately, the decision is a personal one between you and your doctor, but there are worse things than curling up in front of the fire while the rest of your family freezes. Or if you really want to join in the fun, you could always follow (also pregnant back in 2018) Kate Middleton's lead and watch from the sidelines wearing a super cute ski jacket. You should probably also avoid ice skating while pregnant as there’s a big risk of falling, along with sledding during pregnancy.

You can always go for the gold next year!

More Like This
From Sexy To Spooky, These Pregnant Halloween Costumes Will Make An Impression
Are You Leaking Amniotic Fluid Or Is It Normal Discharge? Experts Explain
What Does Amniotic Fluid Smell Like? A Nurse Explains
The 16 Best Affordable Maternity PJs & Lingerie Sets On Amazon

This article was originally published on Feb. 6, 2018