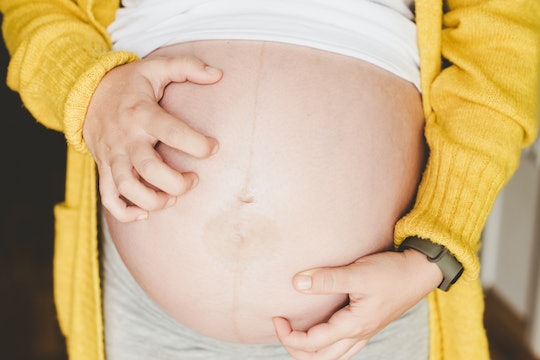 I'm naturally given to itchy, dry skin and the problems of it. Therefore, when I was pregnant, I was not at all surprised that my skin was as dry as a monologue and more annoying than the voice of my third grade teacher who made Ben Stein seem animated. However, more than one person told me itching during pregnancy meant I was having a boy. Why is that? Is it science or superstition that itching during pregnancy means boy? Because — now that you mention it — my skin was far drier when I was pregnant with my son.

The truth of the matter is that the idea that itching skin during pregnancy means that you're having a boy is nothing more than a well developed old wives’ tale. While dry, itchy skin is a common complaint of pregnancy, the degree to which one experiences said itching has nothing to do with the gender of the child. The American Pregnancy Association notes that the itchiness can be due to your abdomen stretching, or your increased blood supply. There is no scientific evidence available that would point to a male or female pregnancy because your skin is itching more than usual.

It's no more valid a means of testing gender than floating your wedding ring on a string over your bump and seeing which way it rotates. Itching is a symptom of pregnancy or a symptom of illness, but itching during pregnancy means it’s a boy? Nope.

What does itching during pregnancy mean?

However, itchy skin during pregnancy may not mean you're having a boy and it is common, but it could also be a potentially dangerous complication known as intrahepatic cholestasis of pregnancy, according to The American Journal of Obstetrics and Gynecology. This condition is categorized by severe itching that usually comes on in your third trimester, and is typically noticed in the palms of the hands and soles of the feet. But it is very, very rare.

A more common reason for itching during pregnancy is something known as a PUPPP rash. PUPPP stands for pruritic urticarial papules and plaques of pregnancy, according to the American College of Obstetricians and Gynecologists (ACOG). It is identifiable by “small, red bumps and hives” that appear on the skin later in pregnancy. “The bumps can form large patches that can be very itchy. These bumps usually first appear on the abdomen and can spread to the thighs, buttocks, and breasts.” It normally clears with childbirth.

So it might not be that your itching means you're having a boy. For many women, it's just a symptom of pregnancy. According to New Kids Center, your hormones screw with your skin. It can make you itch or cause your allergies to worsen. That doesn't mean that you shouldn't speculate, though. Because, let's be honest, trying to decipher the genetic sex of your baby before the ultrasound is just a lot of fun. Until then, stock up on the lotion — it's going to be a bumpy ride.

More Like This
Guys, We Need To Talk About Pregnancy Farts
Is Raspberry Leaf Tea Safe To Drink During Pregnancy?
Is Vape Smoke Bad For Pregnancy? Experts Explain The Risks
32 Zippy Girl Names That Start With “Z”
What Parents Are Talking About — Delivered Straight To Your Inbox

This article was originally published on March 21, 2018