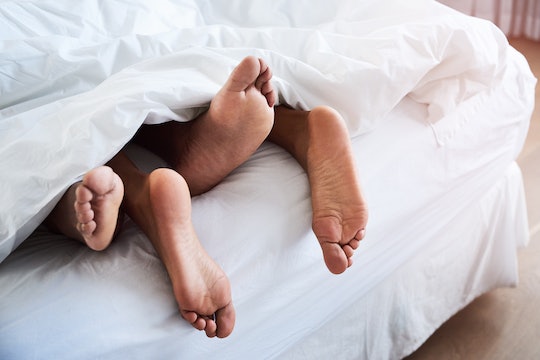 Everything You Need To Know About Missionary Sex During Pregnancy

Can missionary hurt the baby?

When you’re pregnant, doing just about anything with your body can feel a little risky, even if it’s something you’ve done many times before without a second thought. You might feel like the slightest wrong move could lead to some sort of scary complication for this tiny baby growing inside you. This can be especially true when it comes to sex. Pregnancy may leave you questioning everything, even whether or not sex is safe during pregnancy. And what about the tried-and-true missionary sex during pregnancy? Could everyone’s go-to sex position be harmful to your growing belly?

Unless you’re dealing with some sort of pregnancy complication and your OB-GYN has specifically told you not to have sex, sex during pregnancy is perfectly safe, according to the American College of Obstetricians and Gynecologists (ACOG). In fact, sex during pregnancy can even have some benefits, like helping you stay active and reducing feelings of stress. That said, not every sex position is safe for a pregnant woman. The best sex positions for pregnancy can vary depending on how far along you are. To find out if missionary sex is safe during pregnancy, we spoke to some experts.

What is the missionary sex position?

Missionary sex typically has the woman (in this case, the pregnant woman) lie on her back. However, pregnant women are advised to avoid spending much time on their back during the second and third trimesters, because doing so may compress a major blood vessel. This can leave you feeling dizzy and might reduce blood flow to the uterus. Still, this doesn’t necessarily mean that pregnant women cannot have sex in this position.

Missionary sex during the first trimester

Missionary sex is perfectly safe during the first trimester, Grover notes, “as long as you are still comfortable lying on your back and withstanding any pressure on top of your abdomen from your partner.” Anatomically, your womb is safe. Many factors protect the baby against injury, according to Dr. Betsy Greenleaf, doctor of osteopathic medicine and fellow of the American Congress of Obstetricians and Gynecologists. “The embryo is cushioned by surrounding amniotic fluid, which suspends the baby and acts as a shock absorber,” Greenleaf says. “The uterus or womb is still within the pelvic cavity. The public bone protects the womb, so any pressure on a woman’s abdomen from this sexual position would be covered by the fatty tissue of the mons pubis and the pubic bone acting as a guard rail.”

Missionary sex during the second trimester

Although you’ll be further along during the second trimester, the experts we spoke to maintain that missionary sex is still safe for pregnant women. That said, it might be more uncomfortable for the mother at this point. “Typically, by 20 weeks, the top of the uterus has reached the level of the mother’s belly button,” Greenleaf says. “Though missionary sex is still possible during this period, the mother may become more uncomfortable depending on how much her partner leans on her abdomen.” The uterus is no longer protected by the pelvic bone like it was in the first trimester, but the growing fetus is still protected by the muscular sack and amniotic fluid.

As long as you’re not feeling any discomfort, missionary sex is safe at this point in pregnancy, Grover agrees. She adds that missionary sex might become more difficult since it often leads to deeper penetration, which becomes less comfortable as you progress throughout your pregnancy. Every body is different, though, so feel free to try it and see how it feels. If the penetration is too much, you may want to skip it in favor of more comfortable sex positions might be doggy style or side-by-side (spooning), says Grover.

Missionary sex during the third trimester

Missionary sex remains generally safe during the third trimester, Grover says, but only if the pregnant person is the one on top. If the pregnant person is on the bottom you risk putting too much pressure on the vena cava. Also, having your partner lay on top of your belly may be painful or just plain annoying. “The uterus can grow to the size of a watermelon,” Greenleaf says. “During this period, when a woman lies on her back, the weight of the uterus can compress the vena cava, the main vein that brings blood back to the heart. This pressure and decreased blood flow can cause the mother to faint, further affecting blood flow. If a mother’s blood flow is affected, so is the blood flow to the uterus and the baby, and this can be dangerous.” Instead, Greenleaf suggests trying mother on top, lying on her side, or on all fours from behind.

As always, talk to your health care provider about specific sex positions and which are likely to be safe during pregnancy — and particularly during the third trimester — for you and your growing baby.