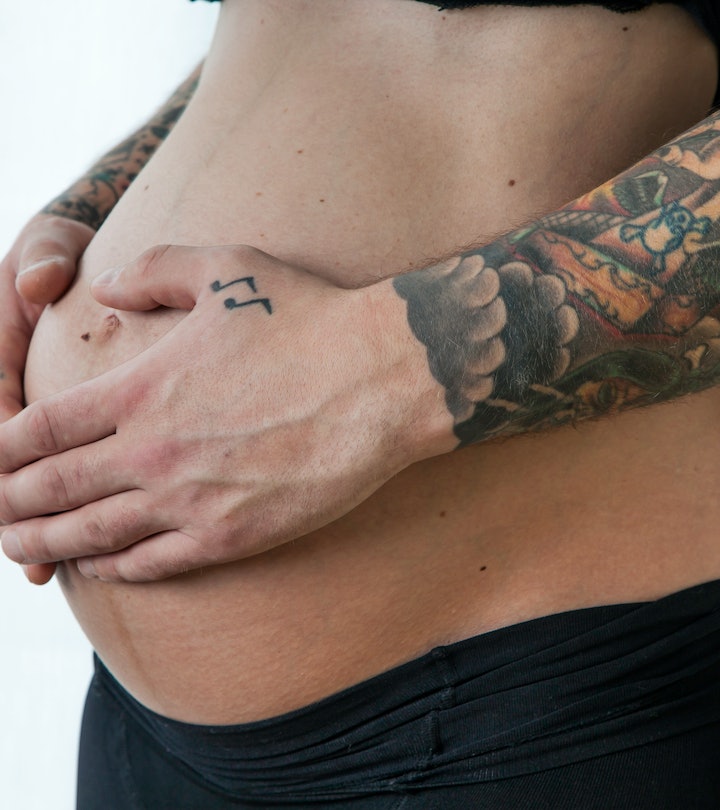 The Complete Guide To Sex During Pregnancy

Everything you need to know about getting down when you're expecting.

It's pretty much inevitable that as your pregnancy progresses and your body changes, so will your sex life. Knowing what to expect, what's normal, and what's not can be incredibly helpful when you're having sex during pregnancy.

Pregnancy sex can be such a satisfying and enjoyable experience, but there are definitely a few things to know about how to get down safely and comfortably when you're expecting. Especially if this is your first pregnancy, learning how your body responds to sex while you're growing another human inside of your womb can be a whole thing (*waves hands wildly*).

You've got questions? We have answers. From those awkward questions you don't want to text your BFF about to the ones you'll definitely want to reach out to your doctor for, read on to see our best advice on what to expect when you're having pregnancy sex. (And let go of all those myths you’ve heard about babies getting hit in the head with penises or sex causing instant labor.)

There are two huge misconceptions about pregnant people and sex, and they are the polar opposites of each other. Everyone either assumes you are incredibly aroused and have an increased sex drive during pregnancy that makes you want to pounce constantly, or everyone assumes your sex drive is as low as it could possibly get and the thought of sex makes you want to run away in terror. Both can be true, but both are not always true.

"Some women will experience a higher sex drive during a portion of their pregnancies. Other women, not so much," says Deena Blumenfeld of Shining Light Prenatal Education. Your libido can be affected by everything and anything like your changing hormones, your changing body, morning sickness, aversions, fatigue, and more. “Physical touch can feel very different — sometimes more pleasurable, sometimes less, and sometimes the amount of pleasure might feel unsettling,” says relationship therapist Rebecca Wong. Just have a lot of communication between you and your partner, and know that whether your sex drive increases, decreases, or stays the same, it’s all normal.

How To Enjoy Sex During Pregnancy

Whether you're pregnant or not, having a few items on hand to help make your sex life more enjoyable is never a bad idea. But, when you are pregnant, your safety and comfort are going to be front and center of every decision you make — including purchasing any accessories you may need or want for intimacy.

For example, you may need to shop for specific lubes that are safe for pregnancy to replace one that suddenly irritates your newly sensitive skin. “Since your vagina may be more sensitive when you are pregnant, it is best to use water-based lubricants because they are less likely to irritate your genitals,” Dr. Gillian Dean, Senior Medical Director for the Planned Parenthood Federation of America, tells Romper. In an effort to not contort your body into a pretzel, you can also invest in pillows for pregnancy sex that help make getting into the right position more comfortable.

Depending on which trimester you're in, you may need to make some adjustments for how your body is positioned during pregnancy sex. Between your growing bump, burgeoning breasts, and the random aches and pains that being pregnant brings with it, it's likely that you'll feel more comfortable in certain positions than in others.

Sex in the first trimester is the time when you'll be most able to take advantage of positioning that might be more difficult once your belly grows. There are a variety of positions that work during each stage of pregnancy, but by the second trimester, you'll probably need to get creative to stay comfortable. In your third trimester, some sex positions can actually work to induce labor, so it's important to pay extra attention at that point.

“Unless there’s some complication that precludes you from having intercourse, just focus on positions where you’re comfortable and not flat on your back,” Leah Millheiser, M.D., director of the Female Sexual Medicine Program at Stanford Health Care, tells Romper.

Bleeding After Sex During Pregnancy

You may notice some light pink discharge after pregnancy sex thanks to a small amount of blood mixing with normal vaginal discharge. Although it's sometimes scary to think about any amount of bleeding during pregnancy, experts say that it's common for small amounts of blood to be present anytime the cervix is irritated — be it from intercourse or a cervical exam during pregnancy.

If you notice some spotting during or after pregnancy sex, don't panic. While bleeding during pregnancy can be an indication of bigger problems, unless it's bright red or there is a ton of blood (at which point you should definitely check with your doctor), you're likely just fine to continue sex once you feel up to it. “Very early on in the pregnancy, when the egg is implanting into the uterus, you may experience spotting or a small amount of bleeding — this is called implantation bleeding and is quite normal,” Dr. Neely Elisha tells Romper.

Experiencing pregnancy itself can be plenty uncomfortable, so thinking about the potential of pain during sex on top of that just sounds downright awful. Unfortunately, there are some times when this might happen thanks to hormone changes, potential vaginal dryness, and even increased sensitivity.

More specifically, you might experience cramping during pregnancy sex, or even feel pressure down below after you get down. "Cramping during or after pregnancy sex is typically from the increased blood flow that comes from being aroused," doula and cooperative childbirth educator Ashley Brichter tells Romper.

Since the muscles that contract during an orgasm are the same ones you'll feel contracting during delivery, you may feel them tense up or cramp up when that rush of blood flow occurs. However, experiencing extreme pain or pain that occurs with bleeding could be cause for concern, so check with your doctor if this is the case.

And if you're worried about your baby feeling pain during pregnancy sex, don't. They're nice and safe in their little cocoon of an amniotic sac.

If vaginal intercourse during pregnancy feels uncomfortable, having oral sex while expecting may be your next best option. Swallowing semen may contribute to some nausea during pregnancy, but other than that, oral sex during pregnancy is pretty safe, whether you're giving or receiving. In fact, there is some information to suggest that there are even benefits to swallowing sperm. (But don’t let that sway you — only give or receive oral sex if you want to.)

"The risks of giving or receiving oral sex while pregnant doesn't differ much from the risks you have while not pregnant,” board-certified OB-GYN Dr. Paula Anderson tells Romper. Namely, you'll want to make sure that neither you nor your partner is experiencing symptoms of an STI, as those infections can be passed on to your baby. It's also important to avoid having your partner blow into your vagina during oral sex, as increased blood vessel dilation could lead to an embolism, but experts note that this is extremely rare.

Condoms during pregnancy sound silly, but in some cases, they are necessary. While the myth that you can get pregnant with another baby or twins from unprotected sex during pregnancy is just ridiculous, you do still need to be safe. “It is vital to be screened for STDs in pregnancy and, unless you are in a strictly monogamous relationship, to use condoms or other barrier methods for every sexual encounter," Dr. Adrienne Zertuche, an OB-GYN at a Division of Atlanta Women’s Healthcare Specialists, tells Romper. Not only can STDs be transferred between you and a partner, but they can also infect your baby.

Sex May Feel Different During Pregnancy

During your first trimester especially, you may notice some differences in your boobs during pregnancy sex because of the changes occurring within your body. During sex, your breasts can leak, be especially tender to the touch, or even feel extra sensitive. “Oxytocin is the primary hormone involved in breastfeeding, because it causes contractions in the muscle cells that surround the milk glands, forcing the release of milk,” OB-GYN Dr. Idries Abdur-Rahman says. “Oxytocin is also called the love hormone because it is released in abundance during sex and orgasm, which stimulates closer bonding.” If this bothers you, you can avoid breast stimulation during sex, but there’s no issue with your breasts leaking. It’s still perfectly safe and normal.

Unfortunately, hormonal changes during pregnancy can also cause the occasional bout of dizziness or feeling lightheaded. Dizziness can happen during pregnancy sex, and most of the time it's pretty normal, but you should be cautious and speak to your OB-GYN or midwife if it becomes a regular thing.

When To Stop Having Pregnancy Sex

For the most part, pregnancy sex is very much OK. “It’s a great time to connect with your partner, sleep better, and make you happier overall. There shouldn’t be any risks unless you have a history of preterm labor or placenta issues,” Dr. Gil Weiss, M.D., assistant professor of clinical medicine at Northwestern Memorial Hospital and OB-GYN at the Association for Women's Health Care, tells Romper. But with some complications, pregnancy sex may, unfortunately, be off the table for expecting couples. For example, pregnancy sex with an incompetent cervix is unlikely to be given the go-ahead by your doctor to avoid the risk of preterm labor.

If you've been put on pelvic rest or are experiencing complications like preeclampsia, your doctor will likely recommend skipping sex to prevent putting yourself or your baby in harm's way. Having sex after losing your mucus plug may also not be recommended, especially if it happens prior to the 37-week mark, and you shouldn’t have sex if your water has broken.

Although your ever-expanding belly and achy back may beg to differ, there's really no hard and fast rule about when to stop having sex during pregnancy as long as you're medically cleared to do so and feel up to it. OB-GYN Lakeisha Richardson tells Romper that you should not have sex if you’ve had premature rupture of membranes, preterm labor, or placenta previa/low-lying placenta — which causes bleeding during pregnancy — or if you’ve had a cervical cerclage.

When in doubt, ask your doctor.