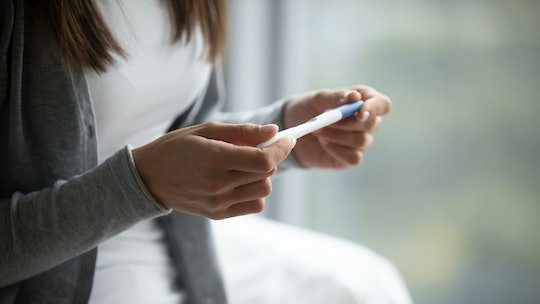 What Is A Molar Pregnancy? There's A Reason Why You've Probably Never Heard Of It

It’s extremely rare, but it does happen.

Getting a positive pregnancy test is just the first step in your journey towards motherhood. But sadly, sometimes not all pregnancies end with a baby in your arms. While miscarriage can bring gestation to an untimely end, there’s another, less common form of loss known as a molar pregnancy.

What Is A Molar Pregnancy?

There are two types of molar pregnancies: a complete molar and a partial molar pregnancy. “A complete mole means that there is no fetus or embryo, no amniotic fluid, and large ovarian cysts,” Dr. Kecia Gaither, MD, MPH, FACOG, OB/GYN and Director of Perinatal Services at NYC Health + Hospitals/Lincoln, tells Romper. “An incomplete molar pregnancy has an abnormal-appearing placenta, a growth-restricted fetus, and paucity of amniotic fluid.” Additionally, there will be higher levels of human chorionic gonadotropin (hCG), a hormone produced by the cells of the placenta during pregnancy, Hormone.org reported.

So, Is A Molar Pregnancy An Actual Pregnancy?

What Are The Symptoms Of A Molar Pregnancy?

In some ways, the signs of a molar pregnancy can mimic a miscarriage. In the study, “Atypical presentation of molar pregnancy,” it was found that a molar pregnancy will present symptoms such as vaginal bleeding, hyperemesis (i.e. nausea and/or vomiting), as well as an enlarged uterus for the pregnancy’s gestational age, and an early failed pregnancy. But there are other symptoms as well, Dr. Peace Nwegbo-Banks MD, FACOG, board certified OB/GYN at Serenity Women’s Health & Med Spa, located in Pearland, TX, explains to Romper. “A patient might have pelvic pain, ovarian theca lutein cysts, hyperthyroidism, and early preeclampsia (at less than 20-weeks gestation,” she says. “Most of these symptoms are secondary to the effects of abnormally elevated hCG levels.”

What Are Risk Factors For A Molar Pregnancy?

How Is A Molar Pregnancy Diagnosed?

Apart from showing symptoms, an ultrasound can detect a molar pregnancy before 12 weeks, the study, “Management of molar pregnancy” stated. Oftentimes, the placenta will look vascular or like a honeycomb in nature. That said, researchers found that a partial mole might be more difficult to detect, because the fetus may still be viable at that point. If an OB/GYN suspects that it might be a molar pregnancy, a complete blood count, including beta-hCG measurements will be taken. Also, a complete molar pregnancy will have more exaggerated beta-hCG levels, while a partial mole might still have levels that are typical with a normal pregnancy.

How Does A Molar Pregnancy Affect The Fetus?

How Is A Molar Pregnancy Treated?

If a molar pregnancy is detected, then the treatment most likely will be a dilation and curettage (D&C), says Dr. Gaither. “If there is concern for malignant GTD, then the patient might have a hysterectomy,” she says. “There will also be frequent HCG monitoring post evacuation of the molar pregnancy.”

Molar pregnancies, although benign, are considered to be premalignant because they have the potential to develop into a malignancy, according to Dr. Nwegbo-Banks. “Malignant disease is referred to as gestational trophoblastic neoplasia (GTN),” she says. “Molar pregnancy is part of a group of diseases classified as gestational trophoblastic disease (GTD), which originate in the placenta and have the potential to locally invade the uterus and metastasize.” Dr. Langdon agrees, adding: “A molar pregnancy is associated with a rare form of cancer.” If hCG levels plateau or begin to rise postpartum, Dr. Nwegbo-Banks says that “this is indicative of gestational trophoblastic neoplasia and chemotherapy is prescribed.”