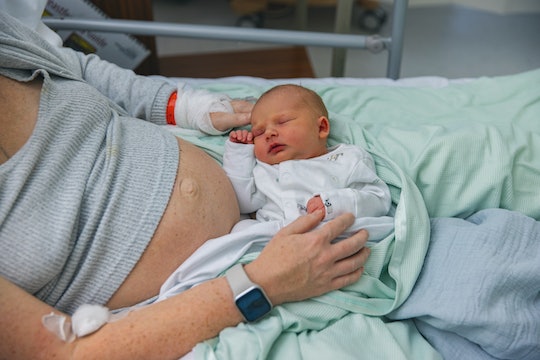 What Does It Mean When Postpartum Bleeding Stops & Starts Again? Experts Explain

Everything you need to know about postpartum bleeding.

It’s pretty well known that when it comes to delivering a baby, there’s going to be some blood. However, some birthing parents may find themselves surprised by the amount of postpartum bleeding they experience long after the baby has arrived. Whether your postpartum bleeding stopped and started again, is dark red, light, heavy, or coming out in clots, it’s understandable if you have some questions. The good news is it’s normal to expect some bleeding, but it’s still important to monitor the situation in the weeks following delivery.

What is lochia? How long does it last?

How long do you bleed after having a baby?

Postpartum bleeding, which is clinically known as lochia, is a normal part of the body’s healing process after delivering a baby. Now, what does lochia consist of? Well, it’s similar to what you experience during a menstrual period, in that normal postpartum bleeding is not actually active bleeding, but rather the body ridding itself of tissue. “When you get pregnant, your [uterine] lining gets very thick and has a lot of blood flow to support the growth of your baby,” OB/GYN, Barbara J. Stegmann, MD, PhD, tells Romper in an email, “when this is no longer needed [after the baby has been delivered], the blood flow stops and the lining dies and is shed.”

Since wearing a pad isn’t always the most comfortable thing, you may be wondering, how long do you bleed after having a baby? According to Dr. Stegmann, you can expect your body to be healed and no longer bleeding within 6 to 8 weeks of delivery. Again, just like with your menstrual cycle, you can expect postpartum bleeding to become lighter over time.

How much postpartum bleeding is normal?

During a normal delivery, the average body can lose between 500 and 1,000 ml of blood, OB/GYN Michael L. Friedman, MD, FACOG, tells Romper in an email. This is completely normal, but Dr. Friedman says that once the placenta has been delivered and the uterus contracts, new moms should only expect minimal bleeding immediately following delivery, “perhaps 1 to 2 maternity pads full,” he says. If you deliver in a hospital, your bleeding will be closely monitored during recovery, so if there are any concerns your healthcare team will be able to jump right into the action.

As for the days and weeks following delivery, Dr. Stegmann says postpartum bleeding will be fairly light and should not be any heavier than your normal period. “If you start soaking pads in 1-2 hours or notice bright red blood,” however, she says “you should contact your healthcare provider immediately, as this is cause for concern.”

Is it normal for postpartum bleeding to start and stop again?

If your postpartum bleeding stopped and started again, you may be feeling a bit concerned (or at the very least irritated, because come on). As jarring as this may be, it’s not uncommon. In the first couple of days immediately following delivery, you may think you’re in the clear only to discover your light pink postpartum bleeding stopped, then started again dark red. According to Dr. Friedman, this is common. “It is normal for bleeding to stop after delivery since the blood clots are inside the uterus and standing or walking causes them to loosen and fall out,” he says, “With time, the blood clots will come apart and the color and consistency of the blood [will be] different and more diluted.”

Even after those early days, you may see more of your postpartum bleeding stop, then start up again. “The uterine lining is healing and in some cases, the healing does not occur at the same rate throughout the entire lining,” explains Dr. Stegmann, “But if the bleeding has stopped for several weeks and then restarts, it may be a period” (which means you can get pregnant again). Also, if the bleeding and clotting has stopped but suddenly gets heavy and bright red again, or you’re seeing large clots again, Dr. Friedman says this can be worrisome and you should contact your healthcare provider.

Why does lochia smell so bad?

The body goes through a lot of unpleasantness during delivery, and the healing process isn’t exactly pretty, but what can be most alarming is the odor during healing, and it might leave you wondering, Why do I smell after having a baby? As it turns out, postpartum bleeding also comes with a bit of an unpleasant stench, but it’s totally normal.

“[Lochia] has such a strange odor because it is really old tissue that has been in the uterus for a long time and then ‘died’,” says Dr. Stegmann. As the bleeding subsides, so will the smell. However, if the smell is particularly awful, that is cause for alarm. “If it is really foul, it often indicates an infection or perhaps a retained foreign body like a sponge or gauze,” says Dr. Friedman. Also, if the odor has changed slightly (even if you wouldn't consider it “foul”), you notice some yellow or green discharge on your pad, and/or you have a fever, Dr. Friedman says this could be problematic as well, and warrants a call to your provider.

When to worry about postpartum bleeding

Now that you have some serious information overload, you probably just want to know, “when should I worry about postpartum bleeding?” Unfortunately, as normal as it is to experience postpartum bleeding, there are instances where it’s not normal and requires medical attention. In the immediate hours and days following delivery, if you notice bright red blood, lose a large blood clot, and/or are pale, feel very lightheaded, have a fast heartbeat, and possibly little urine output, Dr. Friedman says any of these symptoms could be signs of an emergency. If you’re still in recovery at the hospital, your healthcare team should be monitoring you for these signs, but if you’re at home then you need to be evaluated immediately.

After you’ve been discharged, the bleeding should be fairly predictable. If you notice a sudden increase in bleeding, bright red blood, yellow or green discharge, a change in odor, or have a fever along with abdominal pain or tenderness, both Dr. Friedman and Dr. Stegmann say you should call your provider.

As unpleasant as it is, postpartum bleeding is part of the process of recovering from childbirth. Even though it may feel like it’s lasting forever, it will definitely pass and you’ll be back to normal before you know it. In the meantime, stock up on some pads and panty liners, and put your focus on enjoying all of the baby snuggles.