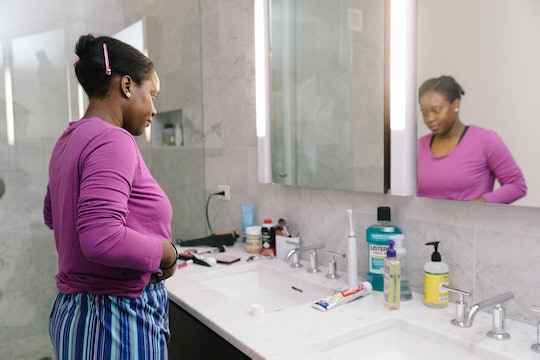 I had no idea what to expect when I was pregnant, and the same could be said for the days when my pregnancy ended. I didn't know how rough recovery would be, that my pre-pregnancy pants wouldn't fit, or the postpartum bleeding red flags to look out for. I went home from the hospital bleeding so much that each trip to the bathroom was a scene from Carrie, armed with nothing but mesh panties and a package industrial-sized pads.

After a few frantic calls to my midwife's office, I was assured that my postpartum bleeding was typical and, after a few weeks, it finally tapered off. But I wish I would have known what was typical and what wasn't, if only for my peace of mind. So, to find out more about the ins and outs of postpartum bleeding, what's normal, and when to worry, Romper spoke with OB-GYNs Dianne Haynes, MD of Upper Chesapeake Women’s Care at the University of Maryland, James Greene, MD, Medical Director for Women’s Health, Kaiser Permanente Washington, Nicolle Underwood, MD at Hoag Hospital in Newport Beach, Calif., and Huma Farid, MD, at Harvard Medical School and Beth Israel Deaconess Medical Center, Boston, Mass. via email.

It turns out that while postpartum bleeding is something that most new gestating parents have to deal with, heavy bleeding can be a sign of a serious problem, especially when it's accompanied by other symptoms. "If your bleeding continues to get heavier instead of lighter/tapering off, this may be an indication of postpartum hemorrhage," Dr. Haynes tells Romper.

"Signs of a problem could include tapering of the bleeding, then an increase in bleeding, a passage of clots, or heavy bleeding," Dr. Farid adds. "Bleeding should definitely get better, not worse." And Dr. Underwood says, "After leaving the hospital, you should generally expect the bleeding to decrease over the first two weeks and to slowly feel better and stronger." For more on postpartum bleeding red flags, and when to call your doctor, read on: