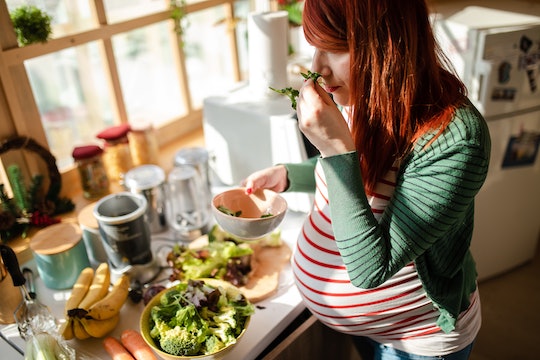 And that's why you can suddenly tell which fall candle your neighbor is burning from two houses down.

When I was pregnant with my youngest son, I could not stand the smell of meat cooking. Just thinking about the smell made me nauseous, especially around dinnertime, and the weird aversion made me feel like my sniffer was permanently broken. But a heightened sense of smell during pregnancy is pretty normal, whether you're suddenly grossed out by the smell of your favorite cup of coffee, or can smell every can of Axe Body Spray from outside of Target.

Apparently, this is a common issue. "The dramatic increase in pregnancy hormones can cause a heightened sense of smell and taste," Deena Blumenfeld with Shining Light Prenatal Education tells Romper. "As with all pregnancy symptoms, not everyone will experience the same things."

But exactly why does your nose go haywire during pregnancy? "Heightened smell, or hyperosmia, is a natural physiological response during pregnancy due to the increase of hCG — pregnancy hormone — levels, along with a decrease in estrogen during the first trimester," New York-based doula Robin Douthit tells Romper. "The rebalancing act of these two hormones is what contributes to the strong aversions to certain odors and scents and can encourage feelings of queasiness or morning sickness."

Since each pregnancy is different, the timing of this particular pregnancy side effect will vary, but generally, it will be most prominent in early pregnancy. "This is likely to begin during the first trimester when hormones are increasing exponentially, but the significance of a heightened sense of smell varies from person to person," Amanda Osowski, an infertility, antenatal, and postpartum doula, tells Romper. "For some, this may trigger morning/all day sickness. For example, before my pregnancy, I used to eat eggs regularly. Starting around six weeks pregnant, the smell alone made me vomit."

Unfortunately, although this super-smelling ability is normally prevalent in early pregnancy, for some, it will linger much longer. "For some women, by the end of their first trimester, it ends. For others, it goes on all the way through," Blumenfeld tells Romper.

But a heightened sense of smell isn't always a bad thing — you may just notice things more strongly than usual. If it's really bothering you, there are some tips to try. "If possible, avoid things with a strong odor. This includes perfumes, bath and body products, scented candles, etc. Some things you can't avoid, like car exhaust or your partner's meal, so having a pleasant counter-smell can help," Blumenfeld says. "With both of my pregnancies, strong cinnamon gum was my go-to to block other odors. Other people prefer peppermint."

Additionally, the traditional morning sickness suggestions should help with any queasiness your heightened sense of smell may bring. "If there is no way to escape the offensive odor, the fact that we are wearing masks due to the COVID-19 pandemic will help to keep some of those smells from hitting our noses," Douthit says. "Taking deep breaths in and out through your mouth instead of your nose until you are free and far away from the funky odor can also be helpful. The added bonus is that you will be able to use this type of breathing during labor to bring oxygen deep into your lungs and to baby as well."

If the ability to smell your preteen's stinky gym socks a mile away isn't something you want to be stuck with for eternity, Blumenfeld says that this is one pregnancy side effect that should resolve shortly after birth. "Since this is due to the increase in pregnancy hormones and the hormones return to pre-pregnancy levels within a few weeks after birth, yes, this issue will resolve after birth," she says. "Usually it resolves by the end of the first trimester for many people."