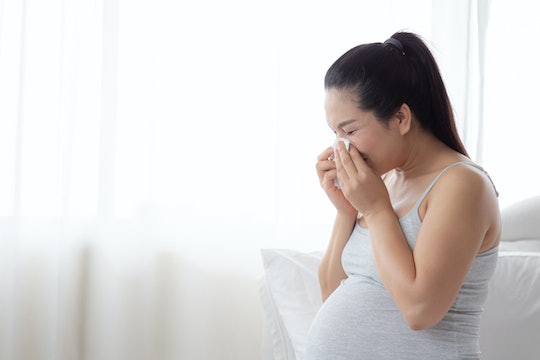 This Is What Pregnancy Rhinitis Is All About

It’s pretty common knowledge that with pregnancy often comes nausea, swelling, and intense cravings, but there’s also a long list of lesser-known symptoms that are equally as uncomfortable and inconvenient. One of these symptoms is pregnancy rhinitis, which can come on quick and last for months. So what is it exactly, and how can a pregnant person get some relief?

What Is Pregnancy Rhinitis & Is It Common?

If you’re currently pregnant and have found yourself constantly congested, you may be experiencing pregnancy rhinitis. “Pregnancy rhinitis is an excess of nasal congestion and mucous with [swelling] of the nasal [membrane],” Nelman Low, M.D., an ENT-otolaryngologist in Torrance, CA, tells Romper in an email. He explains that the condition is fairly common and affects around 20% of pregnant women. While it is certainly an unpleasant part of pregnancy, Dr. Nelman says this congestion, which results in a clear discharge, isn’t something to be concerned about and isn’t contagious.

At this point, there is no consensus on the exact cause of pregnancy rhinitis, however, as with most things in pregnancy, changing hormones likely contribute. “Pregnancy causes an increase in blood volume, which can lead to increased swelling throughout the body,” explains Denae Ellson, a Certified Nurse Midwife in Edina, Minnesota, “Because the nasal passages are surrounded by bone, even minor swelling in the nasal tissues can lead to significant stuffiness.” Additionally, she says that since mucous production is known to increase during pregnancy, this can lead to increased nasal discharge.

What Are The Symptoms Of Pregnancy Rhinitis & How Is It Different From A Cold?

Typically, if you experience congestion for an extended period of time it’s safe to assume it’s the result of allergies or a virus of some sort. While someone who is pregnant can, of course, also suffer from allergies or a cold, a prolonged stuffy nose alone is no longer an obvious sign since it can very likely be pregnancy rhinitis causing the issue.

“Unlike a cold, there is no virus involved [in pregnancy rhinitis],” says Dr. Low. “There should be no fever or chills and no puss in the nasal drainage.” Instead, you’ll mostly just experience ongoing congestion. Other signs your stuffy nose might be pregnancy rhinitis, according to Dr. Low, include “watery or thick clear secretions,” an itchy nose, and/or congestion that worsens when you’re lying down, which can possibly “lead to mouth breathing and poor sleep.”

When Does Pregnancy Rhinitis Start & How Long Does It Last?

While pregnancy rhinitis can start “in almost any gestational week,” according to a clinical review, Dr. Low explains it commonly starts in the second or third trimester. Once the congestion starts, he says it can last six or more weeks. Again, what differentiates this from something more serious is that the congestion doesn’t worsen into a respiratory infection. Also, Ellson notes that it will go away completely within two weeks of giving birth.

If the symptoms are mild, Dr. Low says there is no reason for treating the condition, as it’s not an infection of any kind. But, if the congestion is really bothering you, there are some things you can do to provide symptomatic relief including:

While there are some nasal corticosteroid sprays that are safe for use during pregnancy, unfortunately, these “have not been shown to be effective” in treating pregnancy rhinitis, according to a clinical review. That being said, there are other medicinal options for treating the symptoms, however, “some decongestants can cause birth defects,” explains Dr. Low, “and can exacerbate hypertension,” so never take any over-the-counter medication without checking with your OB first.

Pregnancy rhinitis can be pretty miserable to live with, but the good news is that it won’t last forever. Soon enough, you’ll be rid of it (and a load of other pregnancy symptoms) and breathing clearly while holding your newborn baby in your arms, so hang in there.