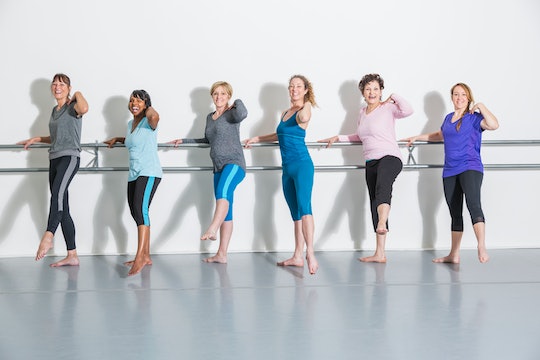 Barre Could Be The Low-Impact Prenatal Workout You Need

Here’s what the experts say.

There’s a lot of talk about staying active while pregnant, but you may not know exactly what activities are safe. Sure, you’re probably not going to start a rigorous gymnastics practice or go mountain biking while pregnant, but even some seemingly safe workouts you participated in pre-pregnancy are probably sending you straight to Google to find answers (as a pregnant person, I Google at least five things a day). But what about prenatal barre? If you’re a fan of this ballet-meets-pilates-meets-yoga exercise, then you may be wondering if barre is safe for pregnancy.

Is barre safe during pregnancy?

“While barre is considered a low impact form of exercise and safe, it is recommended to get your doctor’s approval before beginning any new exercise or classes while pregnant,” Monte Swarup, M.D., FACOG, board-certified OB-GYN tells Romper. So basically if you’ve been practicing barre for awhile now, it’s safe to continue, but if you want to start doing it while pregnant, it’s wise to consult your doctor first.

“Generally, it’s best to not start a rigorous exercise routine during pregnancy that your body isn’t used to,” agrees certified nurse midwife Dr. Sarah Toler, DNP. “But if you workout regularly or are very active, a barre class might be fun to try.”

While a barre class works small muscles and will likely leave you sore (seriously, your quads will be on fire) it’s low-impact and slow enough that if you’re used to working out, it should be fine to incorporate into your pregnancy workout routine.

Can I workout while pregnant?

The American College of Obstetrics and Gynecology (ACOG) recommends moderate exercise daily (or or most days) for 20-30 minutes. While that may seem like a lot, remember that a few extra trips up the stairs with a laundry basket or parking further from the Target entrance add up when it comes to movement in pregnancy.

“Working out during pregnancy has benefits for both the pregnant parent and the fetus. Lots of the benefits are tied to reducing the chances of certain conditions that can be serious,” Toler says. Exercise in pregnancy may reduce back pain and lower the risk of gestational diabetes or preeclampsia, according to ACOG, and barre is a good choice because it’s low-impact, meaning it doesn’t put additional strain on joints that are already strained.

“While that is motivating for many pregnant people, the most important reason I encourage pregnant people to move their bodies is the general sense of wellbeing it can provide,” Toler says, adding that no one should, on the flip side, feel guilty or shameful about not working out while pregnant. “Some people just don’t like to work out, and that’s okay.”

There are some exercises that should be avoided or modified in pregnancy, however. “Avoid activities in extreme heat such as running, hot yoga, and cycling,” Swarup says. “Try not to do exercises that require you to stay flat on your back for an extended length of time.” Some doctors recommend avoiding twists in and intense backbends as well, and at some point, ab exercises may become uncomfortable, though always check-in with your doctor if you have questions about what pregnancy workout plan is right for you.

What to know about prenatal exercise classes

You’ve probably heard of prenatal yoga, but it turns out there are many prenatal exercise classes out there including swimming, pilates, and barre.-

“The best option is to attend a class for pregnant people. The social benefits of these classes are often more important than the physical benefits. It’s not uncommon for people to meet lifelong friends in pregnancy and postpartum classes,” Toler says. “If you can’t find a class specifically for pregnant people, be sure to tell the instructor that you are pregnant, so they can provide you with the right accommodations during the class.”

In addition to meeting other pregnant women, the moves will be tailored to pregnant bodies, and the instructor will be able to provide modifications and poses that can help you stay in shape and prepare for labor.

If you’ve been doing barre pre-pregnancy, it’s totally safe to continue going to classes (as long as they’re not heated) or practicing at home. And if you want to try barre for the first time while pregnant, it’s probably ok, just check-in with your doctor first and be sure to take it slow.

More Like This
When Does Pregnancy Horniness Kick In?
OB-GYNs On How The End Of Roe Changes How They Can Care For Us
Is Swimming Safe During Pregnancy? Here’s What To Know
This Is What Experts Say About Eating Hot Dogs During Pregnancy

This article was originally published on June 21, 2017